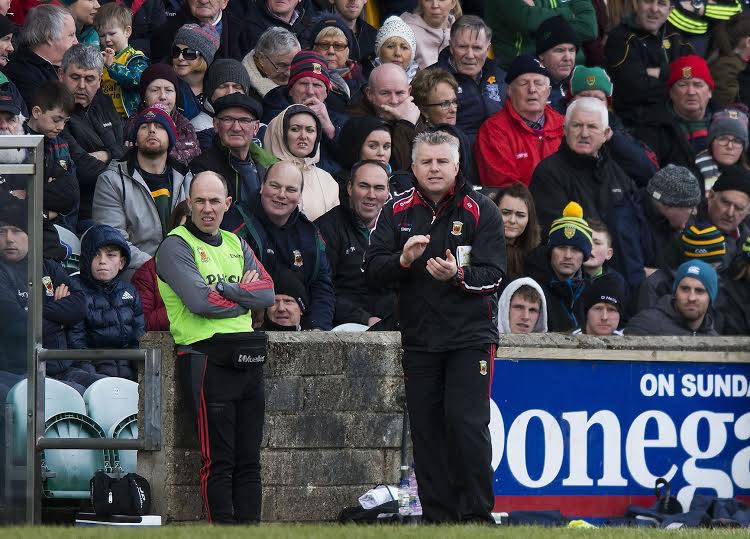 Relief for Rochford as Mayo find a way to survive again

Mayo showed again their cause is never lost on a day when Kevin McLoughlin, again, struck the crucial point to continue their Division 1 stay into its 22nd year.

They arrived in Ballybofey on the back of a 2-14 to 0-8 tanking by Tyrone and without five All-Stars.

Mayo have never won a League game on Donegal soil and landed at MacCumhaill Park with Donegal seeking to take their unbeaten sequence at the venue to a 20th game.

With the sights of summer coming into view, McLoughlin swung over a late equalising point. A year ago, McLoughlin saved Mayo at the death with a winning score against Tyrone.

“I genuinely felt that if we got the margin down to two we would go right to the clock,” Rochford said, after an exciting tie in front of 11,250; an attendance that added a real Championship feeling to the occasion.

“No doubt there was a big sigh of relief. At times we played reasonably well – the first fifteen minutes being obvious.

“I think we gave the momentum to Donegal as much as they taking it back. Just turned over the ball so easily in the top quarter of the field and we were punished: we found it hard to deal with their deep lying runners like Frank McGlynn and Eoghan Ban Gallagher.

“I thought that we remedied that a little in the second half. That ensured that there wasn’t a bigger margin than three points with the game coming to the end.”

Mayo are the masters of the great escapes in the League. They’ve been a Division 1 side since 1998 and McLoughlin’s point, as well as condemning Donegal to the drop, keeps intact that run.

“Last week’s game against Tyrone was an outlier to us,” the Mayo boss said.

“Tyrone were really impressive but I thought we assisted that in some of our decision making and our use of the ball. And we were below par on the things we pride ourselves on – our work rate and tackling and a team like Tyrone, with such good runners, will punish.

“So you take that and try and  learn from it. I don’t think we nailed it perfectly but there was an improvement.

“The things that were important-  one was getting a result and two well, part of the reason that I am back in management is that there is huge character and determination in that group.

“New guys, Eoin O’Donoghue, Conor Loftus, new leaders in the team today. They stood up and that is really pleasing.”