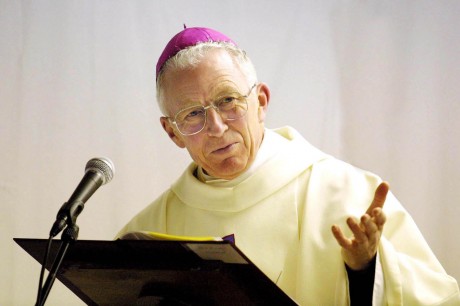 The former Bishop of Raphoe, Dr Philip Boyce, has been appointed as the Apostolic Administrator of Dromore, it has been announced.

The news comes following the resignation of Bishop John McAreavey, as Bishop of Dromore.

Bishop McAreavey announced his resignation on March 1st last through a firm of solicitors.

Bishop McAreavey first became aware of abuse involving Fr Finnegan in 1994, but the first time any allegation were reported to police was in 2006 – four years after Fr Finnegan’s death.

“Today Pope Francis has accepted the resignation of Bishop John McAreavey as Bishop of Dromore,” the Archbishop Eamon Martin confirmed in a statement.

“During this Holy Week my prayers are with the people, religious and clergy of Dromore and in particular with those who have been abused, and with all who are suffering because of abuse.

“I wish to acknowledge Bishop McAreavey’s nineteen years of service as a bishop.  As president of the Irish Catholic Bishops’ Conference, I thank him for his generous contribution in a wide variety of roles as a member of the Bishops’ Conference during that time.

“As the bishops stated following their Spring 2018 general meeting earlier this month, the Church can never become complacent concerning the safeguarding of children.

“The Church is committed to both the review process of dioceses undertaken by the National Board for Safeguarding Children in the Catholic Church and to cooperation with any inquiry required by statutory bodies.

“My prayers also go to Bishop Philip Boyce as he begins his service as Apostolic Administrator of Dromore.”

Bishop Boyce, who is originally from Downings, was ordained Bishop of Raphoe in April 1996, and served until last year when he was succeeded by Bishop Alan McGuckian.

Bishop Boyce will begin his new role on Thursday.