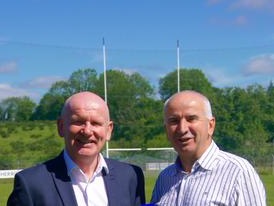 Keep the faith – it has happened before you know!

On Sunday 7th April 2013 the reigning All Ireland Football Champions were relegated from Division One of the National Football League.

Their Manager said his players were “shell-shocked because they felt they had done enough to win the game and we had the game.”

That was Jim Mc Guinness speaking after Dublin’s Paul Mannion had kicked an injury-time point to earn his team a draw at Mc Cool Park which condemned Donegal to Division Two football for the 2014 season.

I doubt if Mannion was allowed to take as many steps before scoring as Mayo’s Kevin Mc Laughlin was before doing so on Sunday to earn his team a draw and the salvation of retaining it’s Division One status.

But interestingly it made the score 1-10 to 0-13, while of course last Sunday’s game ended level also at 0-13 to 0-13, is 13 still unlucky for some I wonder!
In 2013 Donegal went on to beat Tyrone six weeks later in the Ulster Championship, then Down before losing the Ulster final to Monaghan and after beating Laois lost an All Ireland Quarter-Final to Mayo.

In 2014 Donegal regained it’s Division One status, won the Ulster Championship, beat Dublin in that epic All-Ireland semi-final and narrowly lost to Kerry in a final that should have been won. So, does staying in Division One of the league really matter that much when it comes to championship?

It was evident that our defeat to Galway in Sligo last year was the end of a golden period for our senior football team. So many of those who had served us so well for so long had either already gone or went after that defeat, they owed us nothing, they had given they all and how we had enjoyed every moment of it.

But the time had come for change and when Rory Gallagher decided to step down as Manager, it was left to the newly appointed Declan Bonner to begin the re-build job.

That we have much talent in the county is without question and already we have seen the potential that is there. But very few players, no matter how talented they are, make the step from Minor / Under 21 to senior without a settling in period and we have seen that during this league campaign.

We should have won in Kerry despite playing much of the game with 14 men, we deserved at least a draw against unbeaten Galway, gave Dublin a real test in Croke Park and certainly should have won on Sunday.

Little things make such a difference but one victory in seven games will never be enough to keep you up, so we can have no complaints about making the drop to Division Two.

Bonner has given many of his young squad plenty of game time in this campaign, and like them , will have learned a lot in terms of who will make the cut for the championship.

If everyone is fit you can expect the starting fifteen against Cavan to still have an experienced look about it. Mark Anthony and Hugh Mc Fadden , Mc Gee, Mc Grath , Mc Glynn , Mc Loone , the Mc Hughs, the Mc Breartys , Mc Elhinney , Mac Niallias, Murphy , Doherty , and the Thompsons all have still plenty to offer while Ward , Eoghan Ban , Morrison , O’Donnell , Mulligan , Mc Menamin, the Brennans and others will all be looking for starting places.

Newly promoted Cavan will arrive in confident mood to Ballybofey on Sunday 12th May, and so they should after an excellent league campaign.

With Tyrone , Monaghan, and newly promoted Armagh and Fermanagh on the other side of the draw there is a opportunity for the winners in Mc Cool Park to begin a run at a Ulster final and while neither will admit that publicly, both will be very aware of it.

After that draw against the Dubs and relegation back in 2013, Jim Mc Guinness was quick to point out that his and his team’s focus was very much on the Championship clash with Tyrone.

Declan Bonner’s mindset is exactly the same because he and his squad know very well that they will be judged by all observers on their performances in the 2018 Championship and not what happened in the league.

We’ve seen it all before of course, but that doesn’t mean we will be any less interested or excited about what coming down the road this summer of the Super Eights. Keep the faith.

And to finish, well done to Maxi and Damian’s Senior Ladies squad, I’ve seen them a couple of times and they seem to be getting better as the games come along, a semi-final spot looks fairly secure but like the men their focus is very much on the championship, still good to win games in the build-up to that.

And finally congrats to our former manager Rory Gallagher on leading his native county Fermanagh to promotion to Division Two, we will look forward to meeting them in a big derby game next year, and who knows maybe an Ulster Final before that. Until the next time, stay safe.

Keep the faith – it has happened before you know! was last modified: March 26th, 2018 by Stephen Maguire