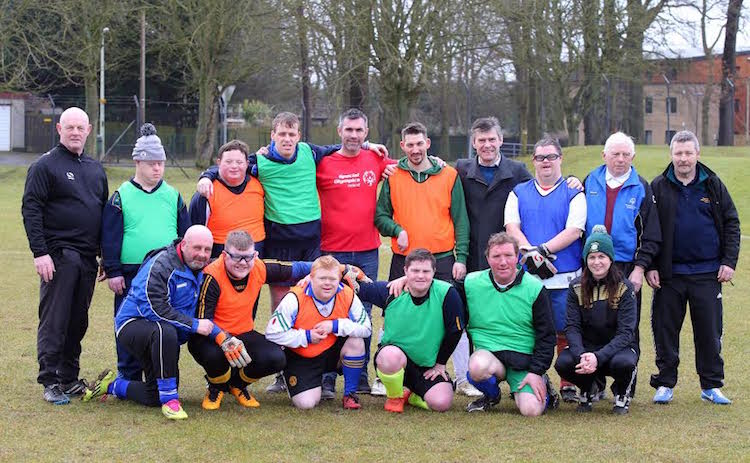 Footballers from North West Special Olympics Club in Letterkenny, Donegal were among those visited by former Northern Ireland and Manchester United footballer, Keith Gillespie, at a recent training session for Team Ulster in the Antrim Forum.

Keith joined members of the Team Ulster football teams, including Mark McDuffy and Trevor McGrenra, footballers from North West Special Olympics Club, as they prepare to compete on a national stage at the Special Olympics Ireland Games, which take place in Dublin from 14-17 June 2018.

A total of 36 Team Ulster footballers across three squads will participate in the Ireland Games this year, which is set to be one of the largest and most prestigious sporting events to take place in Ireland in 2018.

Speaking at the training session, Keith said: “It was fantastic to meet the Team Ulster footballers and their families today and to hear all their amazing stories and get the chance to take part in their training session. Their passion, excitement and enthusiasm is so inspiring. As training ramps up in preparation for the Ireland Games, the pressure is on, but they are geared up and ready to go; I have no doubt they will do Ulster proud. I’m looking forward to following their progress and cheering them on.”

Shaun Cassidy, regional director, Special Olympics Ulster added: “To have a Northern Irish sports star like Keith supporting Team Ulster is such a thrill for our athletes as they make their preparations for these important Games. We are extremely proud of all of the athletes who will be representing Ulster at the 2018 Special Olympics Ireland Games in Dublin and will be counting on lots of home support to make the 2018 Ireland Games a real success.”

Special Olympics Ulster will host its annual Collection Day on Friday 20th April, which is sponsored by eir. Money raised will go towards the maintenance and development of the Special Olympics programme, which gives adults and children across the Island of Ireland the ability to participate in sports and events. To register as a volunteer, make a donation or keep up to date with Special Olympics Ulster events and athletes, visit www.specialolympics.ie

Stay up to date with Team Ulster’s road to the Ireland Games on Twitter, @SOIreland @SO_Ulster and on Facebook, facebook.com/SpecialOlympicsUlster