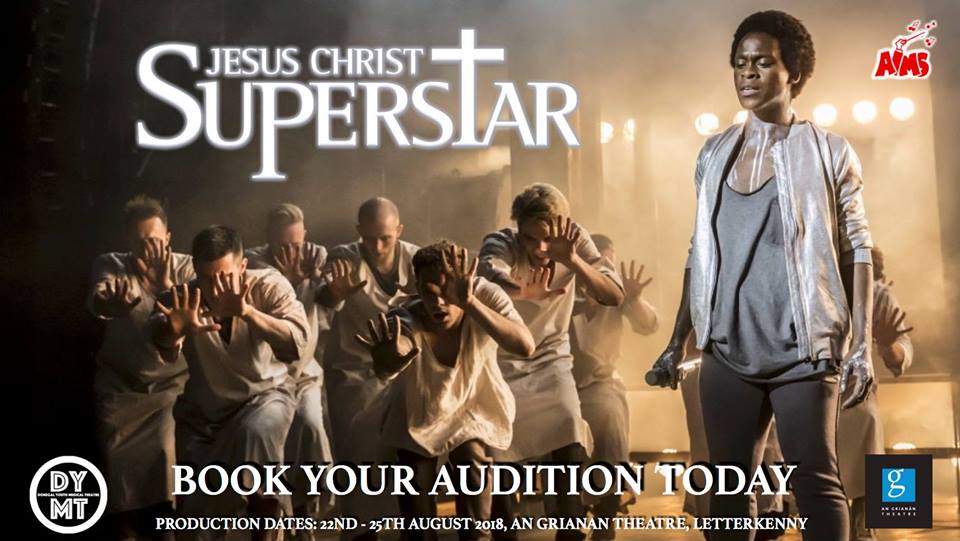 Would you like to be the star of ‘Jesus Christ Superstar’?

The search has begun to find talented young performers aged 12-24 for the cast of Jesus Christ Superstar, a hit show coming soon to the north west.

Following the success of ‘Phantom of the Opera’ last August, Donegal Youth Musical Theatre (DYMT) have recently announced their summer production for 2018 as the Broadway hit, ‘Jesus Christ Superstar’.

Keeping it within the high realms of another Andrew Lloyd Webber classic, the announcement has already sparked huge interest across the North-West in advance of next month’s auditions.

Following a county-wide search for the North-West’s most promising actors, singers and dancers, successful cast members will receive the highest level of training over a three week block of intensive rehearsals from nationally and internationally acclaimed tutors and masterclass coaches from 1st – 21st August 2018, before the production run in An Grianan Theatre, Letterkenny form 22nd-25th August.

Last year’s sell-out run of the North-West premier of the, Phantom of the Opera, was met with incredible reviews, both locally and nationally, as Donegal was instilled as a hub of musical theatre excellence; “…Visually stunning…a Feast for the eyes…” (AIMS Review of DYMT’s Phantom of the Opera)

DYMT Director, Séimí Campbell, spoke of his excitement for this year’s production as he warned us to ‘expect a very different adaptation of JCS; one that is set in our own current affairs’. For a production that is traditionally predominantly cast as male actors, Campbell also added ‘we are looking for both female and male actors to audition for all leading roles. It is going to be ensemble-based. Experienced dancers and singers – we’re looking for you!’

Applications for JCS are now open, with more information on the summer course on Donegal Youth Musical Theatre’s social media @DonegalYouthMusicalTheatre. With places filling up quickly, book your place at auditions today.

Download and complete the form and return to DONEGALYOUTHMUSICALTHEATRE@GMAIL.COM before 11th April 2018.