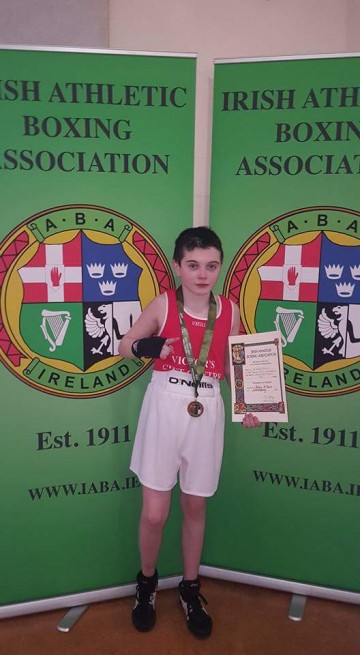 Four Donegal boxers go in search of Irish titles this weekend as the National Boy 4 and Junior 1 & 2 Championships come to a close at the National Stadium.

Dylan Browne-McMonagle and Paddy McShane, both of Letterkenny ABC, have reached the final stage, as has Illies Golden Gloves men Jessie Gallagher and Lee Davidson.

Browne-McMonagle, a fine all-round sportsman who has also been making big headlines as an amateur jockey, fights in the Boy 4 39kgs final on Saturday. Browne-McMonagle beat Christopher McEvoy from Donore in his semi-final and heads for the capital in fine fettle.

Two-time Irish champion McShane is up against The Ballagh’s Aaron Kirwan-Doyle in the Junior 1 42kgs final, while Gallagher squares up to Aodhan Byrne of Kilcullen at 48kgs.

McShane (pictured above) overcame Monica’s John Ward at the penultimate bout while Callaghan made light work of Tralee’s Jonathan McCarthy.

There will be extra Donegal interest in that 48kgs decider, given Byrne’s strong ties to the county with his mother, Sinead Long, a native of Ballybofey.

There was no joy for a number of Donegal punchers at the weekend in semi-finals.

Dungloe’s Fionan Rodgers was stopped by Killian Geraghty from Crumlin in a Junior 2 57kgs semi; Dunfanaghy’s Oran Wallace lost to Kiril Shydenko from Monkstown on a 3-2 split at 60kgs; his brother Oisin was beaten by Docklands’ James Whelan in a Boy 4 63kgs contest; while Raphoe pair Kai Weir and Tom Doherty lost to Aaron Walsh and Davey McDonagh at 66kgs and 85kgs respectively.