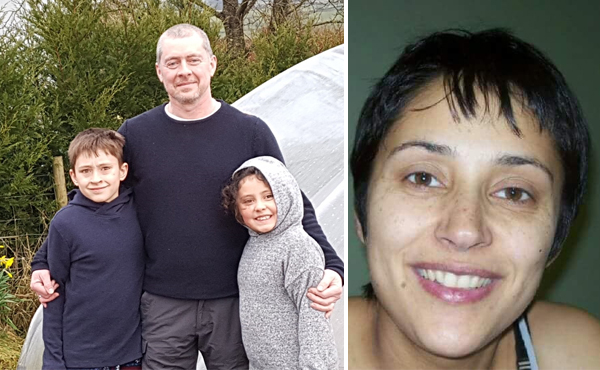 Remembering a much-loved mother in a special way

written by Staff Writer March 27, 2018
On Sunday week, April 8th, hundreds of women will take part in the Run Donegal Women’s 5k in Stranorlar. The proceeds of this year’s event will go to the Donegal Hospice and will be held in memory of the late Lisa McGranaghan from Castlefinn.
As race day draws closer, Lisa’s widower, Kevin McGranaghan, spoke about the tremendous level of care and compassion Lisa, himself and their two children Joshua (11) and Robyn (8) received from the Donegal Hospice before her passing two years ago. 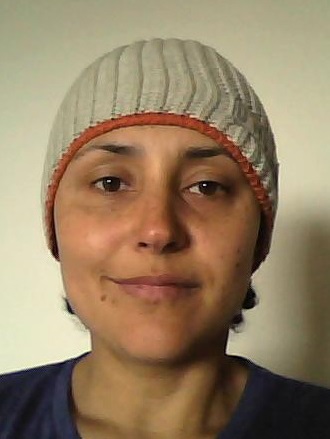 Remembering Lisa – kind, compassionate and strong
The eyes are drawn instantly to the striking picture of Lisa located on the back wall of the toy room, just off the kitchen in the family home at Alt Upper, Castlefinn. Her head is covered with her trademark hat. Her face is happy and full of life.
Lisa, originally from Swansea in Wales, spent much of her spare time in the 30-foot tunnel in the back garden where she grew vegetables.
It was at the end of January when Patsy McGonagle from Finn Valley AC, called Kevin and asked how he’d feel about this year’s Run Donegal Women’s 5k being run in Lisa’s memory.
“He told me that because of the close connection with the family and the club that they wanted to do it in memory of Lisa. And I said ‘absolutely’. That’s because the cause is the Donegal Hospice, and what they did for us you just couldn’t forget,” Kevin said.
“We never thought we’d need it – nobody does.” 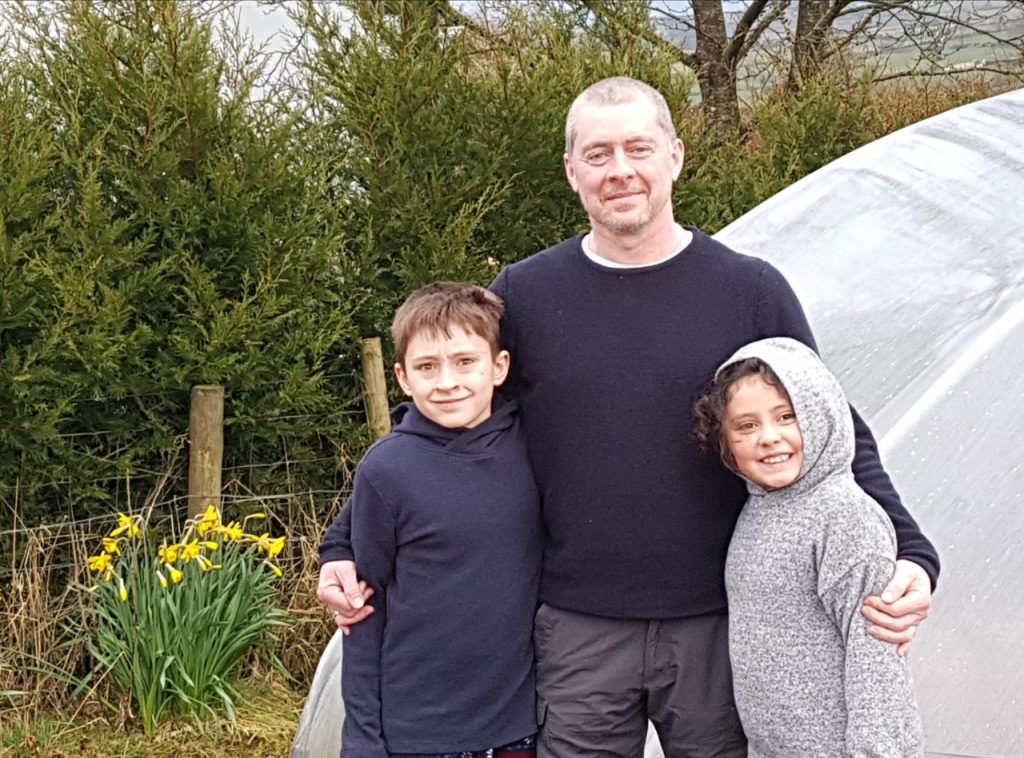 Kevin McGranaghan with his daughter, Robyn and son, Joshua.

For ten years, Lisa battled with cancer. The mother of two was just 43 when she passed away at the Donegal Hospice on Saturday, March 5th, 2016.
“Things had been bad before and you never actually believed it was going to come to it, because we had gotten away with it for so long and different treatments started to work. Whenever one would fail, another new one would start. Then she went into a lot of pain and that’s where the Donegal Hospice came in.”
Kevin was full of praise for Letterkenny University Hospital and its oncology ward. Towards the end of 2015, the hospice doctors treated Lisa in the oncology ward. She went home for a couple of weeks before Christmas and was back in on December 26th. She was seen by the hospice doctors on a regular basis in January and February, helping her to deal with the pain.
“Because of the pain, they couldn’t give her treatment. They wanted her out of the hospital and getting better so they could treat her again. This, again, is where the Donegal Hospice came in and they came out to the house. The hospice nurse came out to check all the equipment and the local nurse also made sure everything was okay in terms of medication.”
Lisa only made it home for three days before she had to return to hospital at the end of February. She was placed on heavy medication for the pain. She was then transferred to the Donegal Hospice.
“We knew she was fairly close. She wasn’t going to last much longer. She went in on a Monday and passed away on the Saturday. The staff there were great. Everyone says it about them, I know. But they’re a different breed. They didn’t just look after her, they looked after everybody that went in.”
While the children knew their mum was sick, what could happen wasn’t discussed.
“There wasn’t any point because all along she had been battling it and getting on well. So there was no point in having them worried to that extent. One of the nurses, Mary, asked me if I’d spoken to them and I hadn’t. I told her I didn’t know how. So she sat down, talked to me and advised me about the best way to do it. So the Donegal Hospice were able to help with that, too. It was unreal what they were doing. And Mary was right in the advice she gave me and came back to me after to check how I got on,” Kevin added.
Lisa had to get treatment almost immediately after Joshua was born. Yet, she stayed strong throughout that decade of sickness, suffering and treatment.
“Lisa was the kind of person that you were glad you knew. She was just so kind and understanding to people and was more concerned about other people than what she was going through personally.
She was always baking, knitting or growing stuff for people. I tried to keep her headstone simple because she didn’t like fussy things. So to explain her I used ‘kindness’, ‘compassion’ and ‘strength’,” he commented.
And as a mother, Kevin said Lisa was just a natural.
“When people say there are no instructions when it comes to parenting, I think she already had them hard-wired. A lot of what I learned since Lisa passed away I learned from her, and remembering the way she did things and treated people. A few months before she died the oncologist asked her what did she expect from any further treatment. Lisa wasn’t expecting a cure, or an easier treatment regime or less pain. She just said ‘more time for Joshua and Robyn to be a bit older before anything happened’.”
Two years on from Lisa’s passing, Kevin is adopting the one day at a time approach to life. Birthdays, anniversaries and Christmas can be extremely testing times.
“It could be the day before or the week after when it might get to you most,” he explained.
Kevin met Lisa while the pair were working in Morocco in 2001 and married in Wales in 2004. They relocated to Donegal in 2005.
Kevin will walk next month’s Run Donegal with Joshua and Robyn. While he’s readying himself for a day of many emotions, he said pride will override all else.
At 11 am on Sunday week in Swansea, 20 of Lisa’s family and friends will also hold their on 5k in memory of Lisa.
“Whenever there is something being done, it’s never so bad. The Run Donegal 5k is a positive thing – it’s always positive when you’re raising money for the Donegal Hospice. It has been on my mind in recent days and it does bring memories back. It’s hard in a way because the launch of the race coincided with Lisa’s second anniversary. But we are definitely looking forward to it.
“There will be hundreds out running in her memory. That will be nice.” 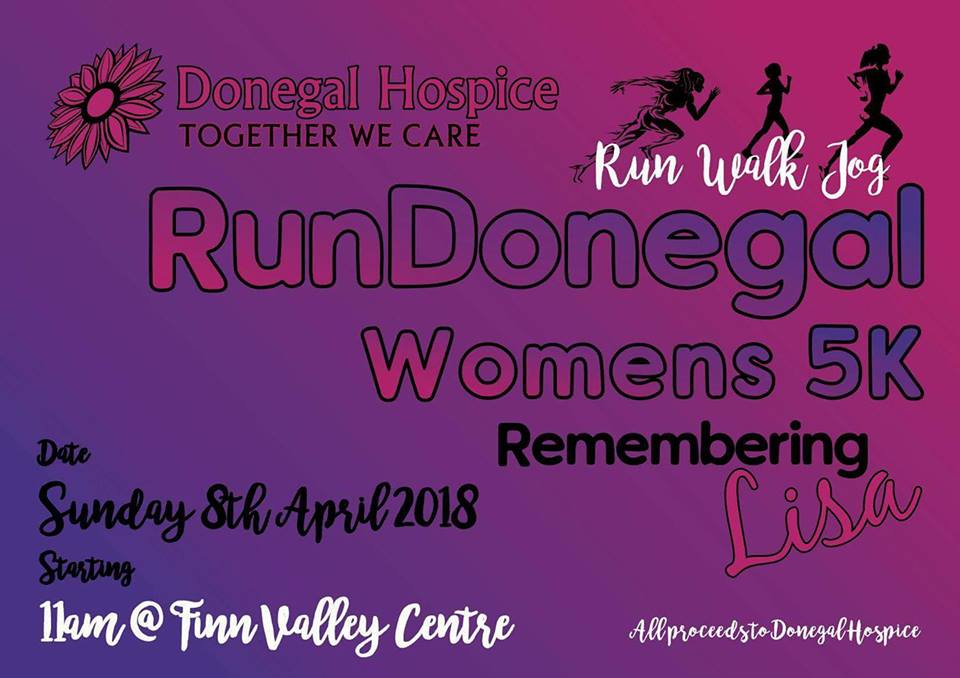