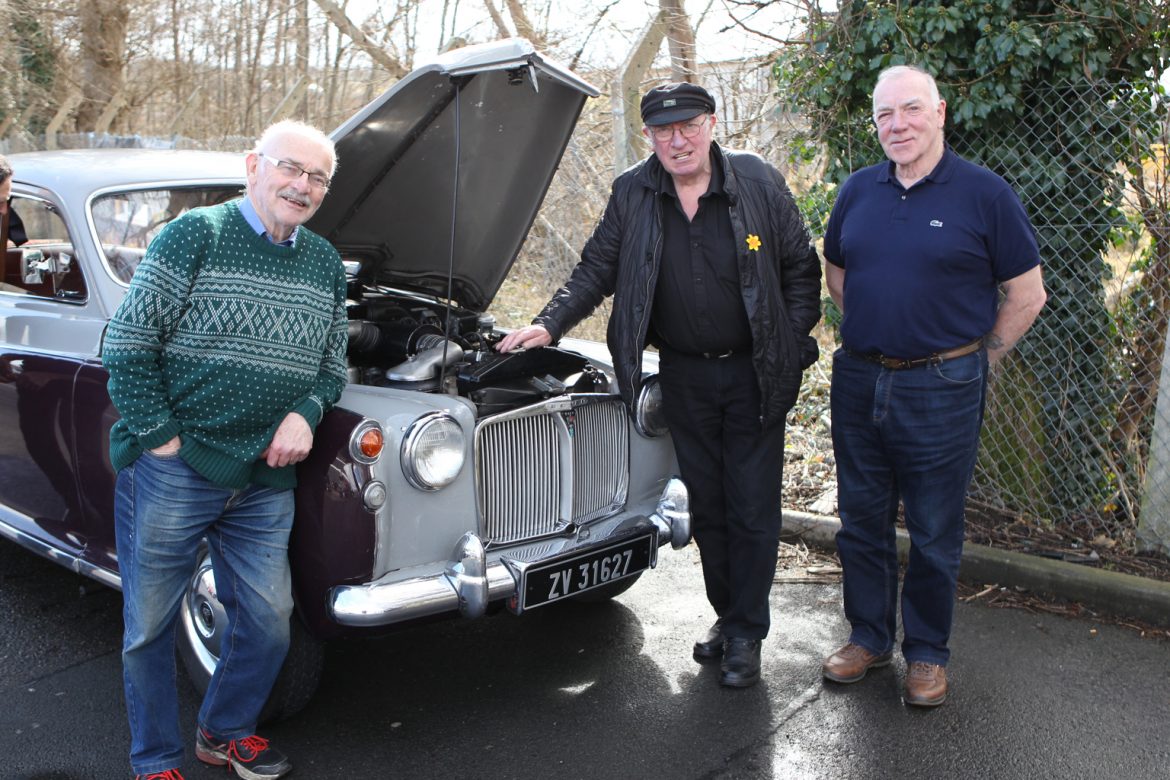 The best-laid plans to watch the opening round of the Formula one didn’t go well.

It was live from Australia in the early hours of Sunday morning, our time. I awakened to the sight of Sebastian Vettel waving at me out of the television as he headed down the finishing straight in Melbourne. I had missed the race completely which started at 6 in the morning.

Before I went to bed the night before, Lewis Hamilton was in poll position and his Mercedes team looked to be ahead of the pack. Overnight as we lost an hour to summertime, reigning world champion Hamilton lost the chance to win the first Grand Prix of the season in Australia.

I am a Ferrari fan but not a big fan of Sebastian Vettel so it was bittersweet to see the prancing horse in red take to the chequered flag on Sunday morning. 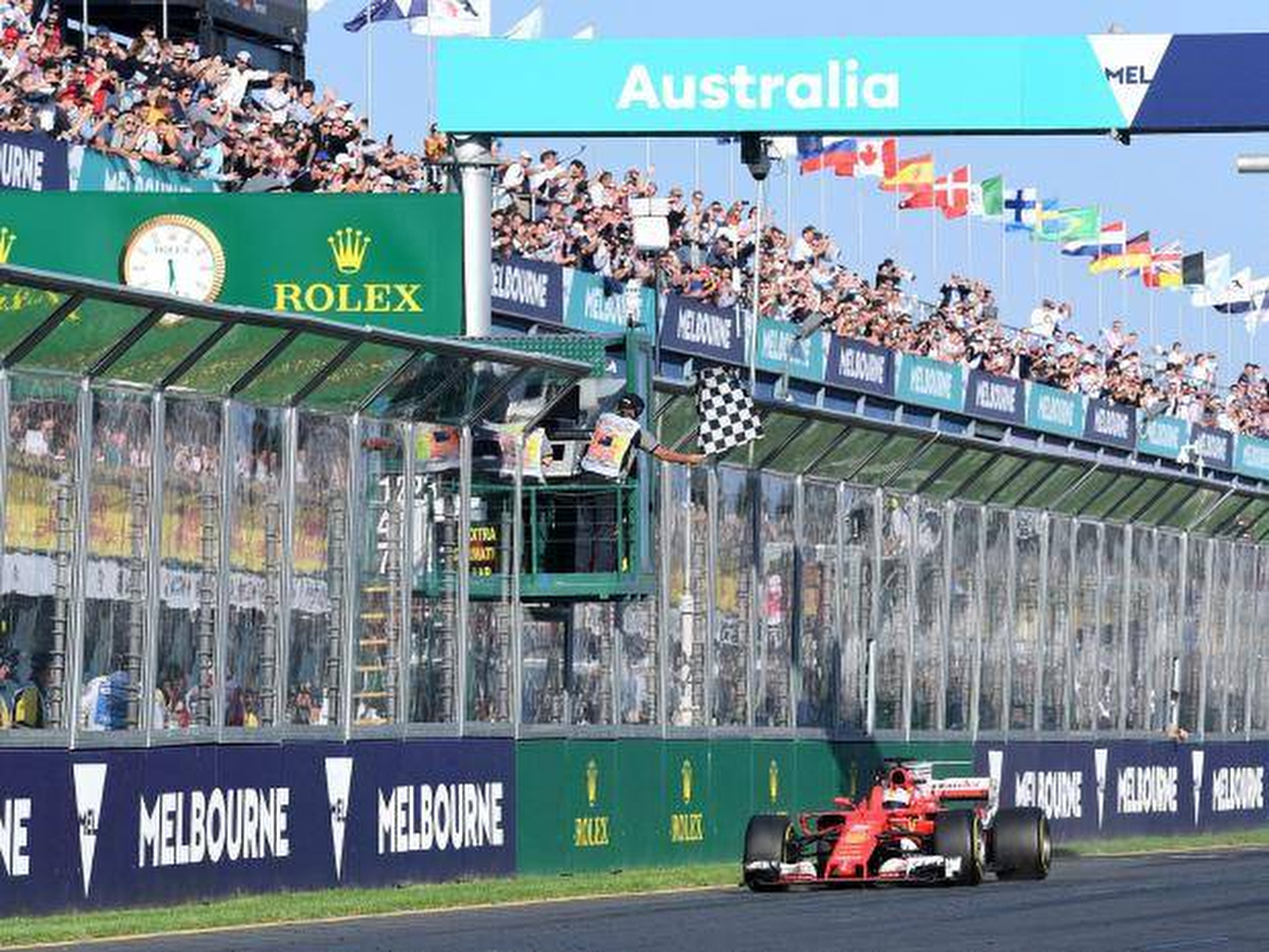 Timing is everything
Turns out I wasn’t the only one who slept through the race! They say it was a computer glitch that miscalculated how much time Hamilton had to be in front to cover the possibility of a safety car in the race.

The F1 in Melbourne had its sponsor Rolex proudly displayed around the track on Sunday but it was Ferrari who stole the timing show when they decided to bring Vettel in for tyres when the virtual safety car was deployed with Romain Grosjean’s retirement triggering VSC on lap 26.

Ferrari pounced to take advantage of the cars on track being forced to drive to a slower lap time, because of the danger on the track. enabling Vettel to make up time between coming off the track and going into the pit which ended up giving him just enough to come out on the track just ahead of Hamilton who was leading the race at a restricted speed.

Once Vettel was in front (which he did in the slip lane out of the pit lane) he now was at the front of the grid and on fresh tyres.

Lewis Hamilton never put a foot or tyre wrong all weekend, and his team were building on that and run his car with the least amount of drag assuming it would be running in clean air but sitting behind Vettel on the track to Hamilton cars was suffering in the heat.

Ferrari was the first to admit that their car was not on the pace with the Mercedes so had to look at different ways of gaining any advantage on the track.

Ferrari put one of their drivers, Kimi Räikkönen on Hamilton’s pace and put their other driver Vettel on a longer pit stop with the hope that a safety car would change the pace of the race on the first Grand Prix of the season, when I eventually got to see the race it was a disappointment, as the race was not won on the track but in the pits. The cars are so highly tuned now that even following another car on the track creates problems, both to the aerodynamics and the cooling of the car.

Overtaking was impossible in Melbourne on Sunday which made the opening F1 look more like a Sunday Run than a Grand Prix.

On a positive note, Vettel is working with a lesser Ferrari than we are used to so his talent to win on Sunday showed for a good battle for the season. 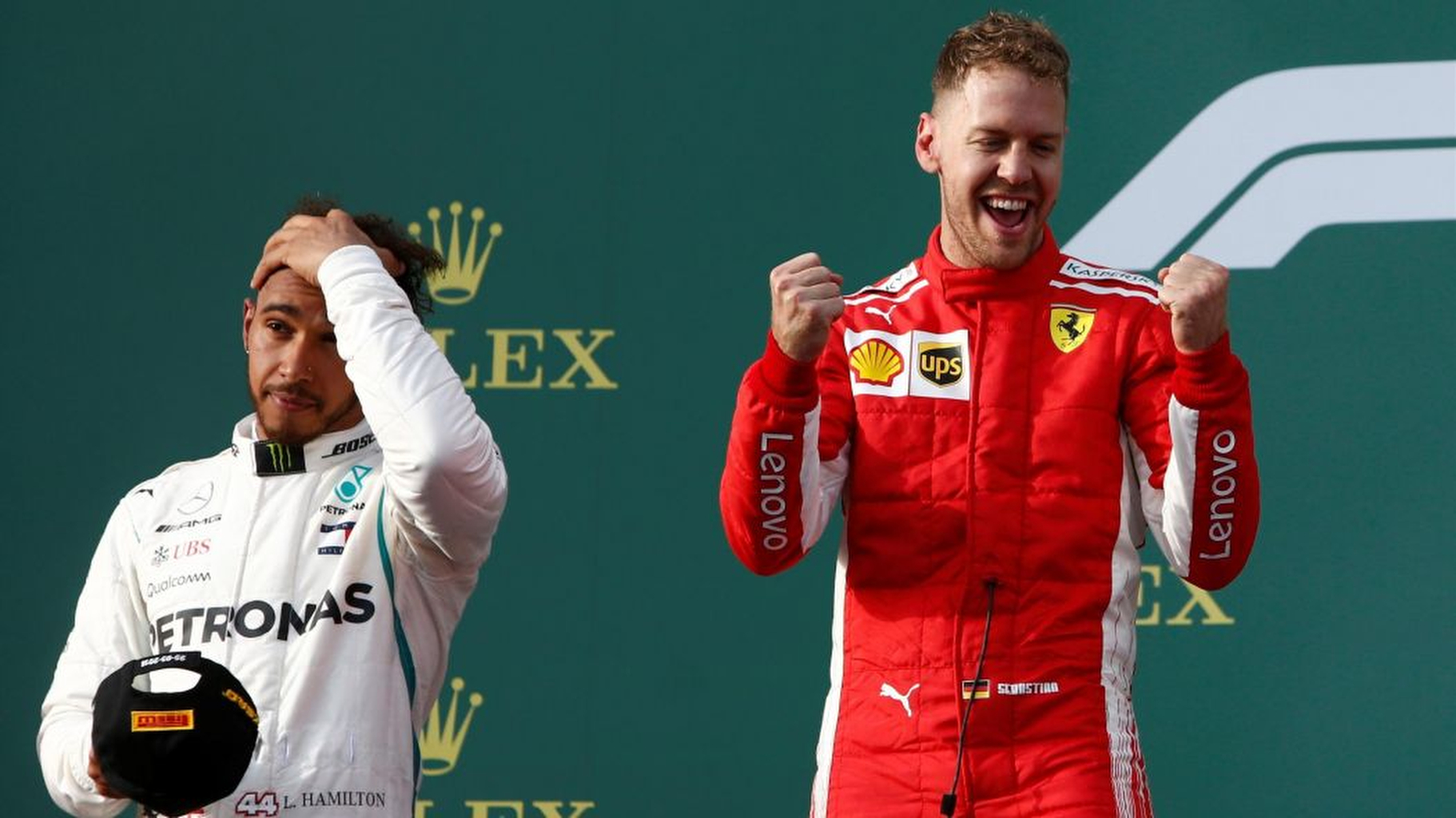 Home starting grid
Meanwhile in Donegal later that Sunday no less than four Mercedes lined up on the grid at the back of the Applegreen Filling station in Letterkenny.

A single Jaguar sat in pole position until someone parked in front of him. The start was planned for 1pm Summertime but was delayed for a drivers’ meeting. These were members of the Donegal Vintage and Classic Car Club and they planned to head to Killybegs on their day but one of the drivers that landed late informed the drivers that there were wile traffic jams in the Twin Towns because of Donegal’s big game.

By this stage two more Morris Minors landed, a classic Hilman a Honda, and a Rover 100 landed for the first run out of this season. 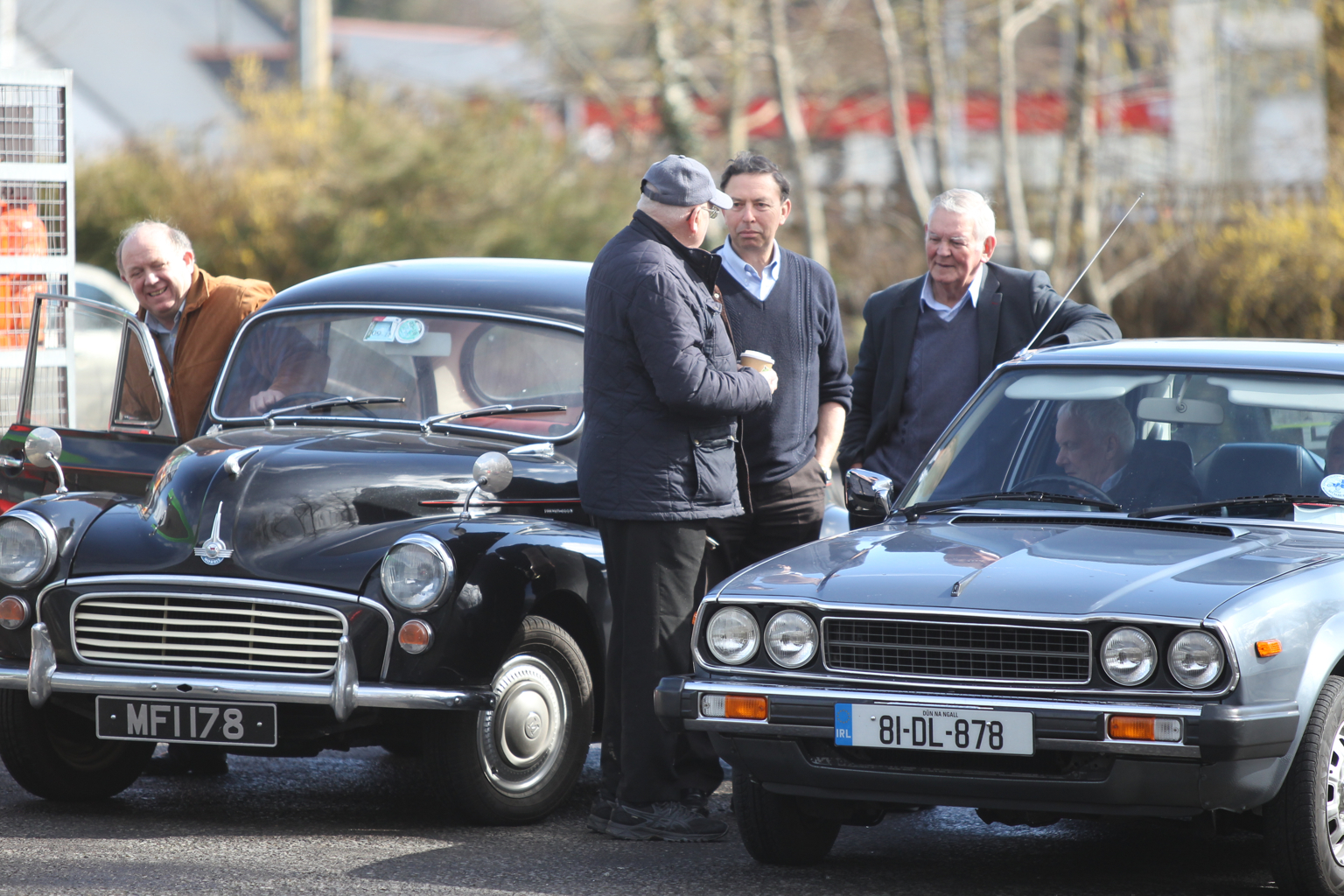 Having a yarn on the starting grid for the Donegal Vintage and Classic Car Clubs outing on Sunday to Fanad. Photo Brian Mc Daid

Peter Browne’s Beautiful Rover 100 was the star of the show and the hours over the winters months made his original 57-year-old 2.4cc six cylinder classic look amazing. 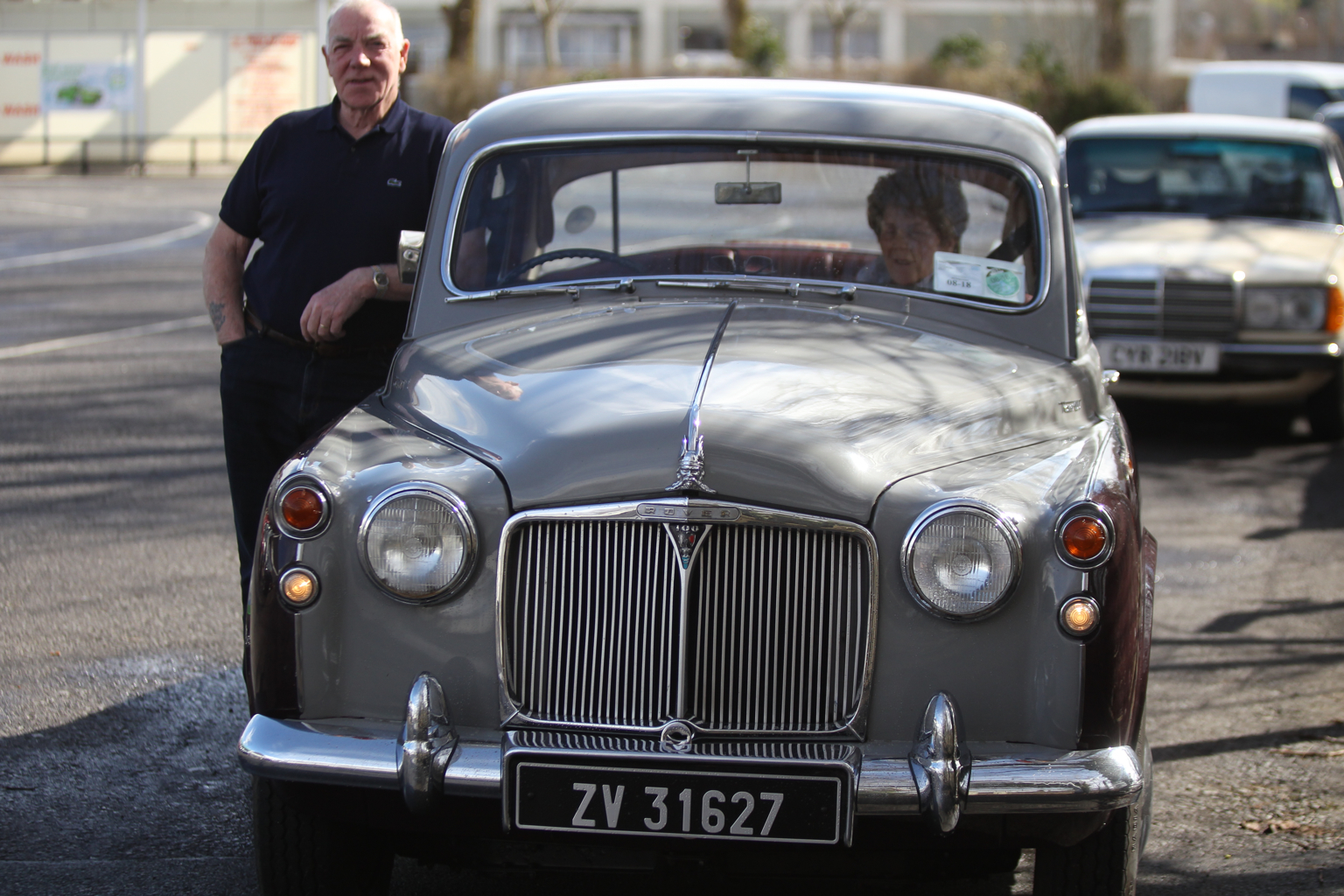 Peter Browne with his 1961 2.4 six cylinder Rover 100 on its first run out of the season with Donegal Vintage and Classic Car Club

Sitting proudly awaiting the start of the run out with the smell of petrol, hot antifreeze and the curing of newly painted rocker covers which have been brought up to engine temperature for the first time this year Brendan Duffy from the Showband the envoys get the show on the road.

The cars make they way to Letterkenny before taking a right to head for Fanad. 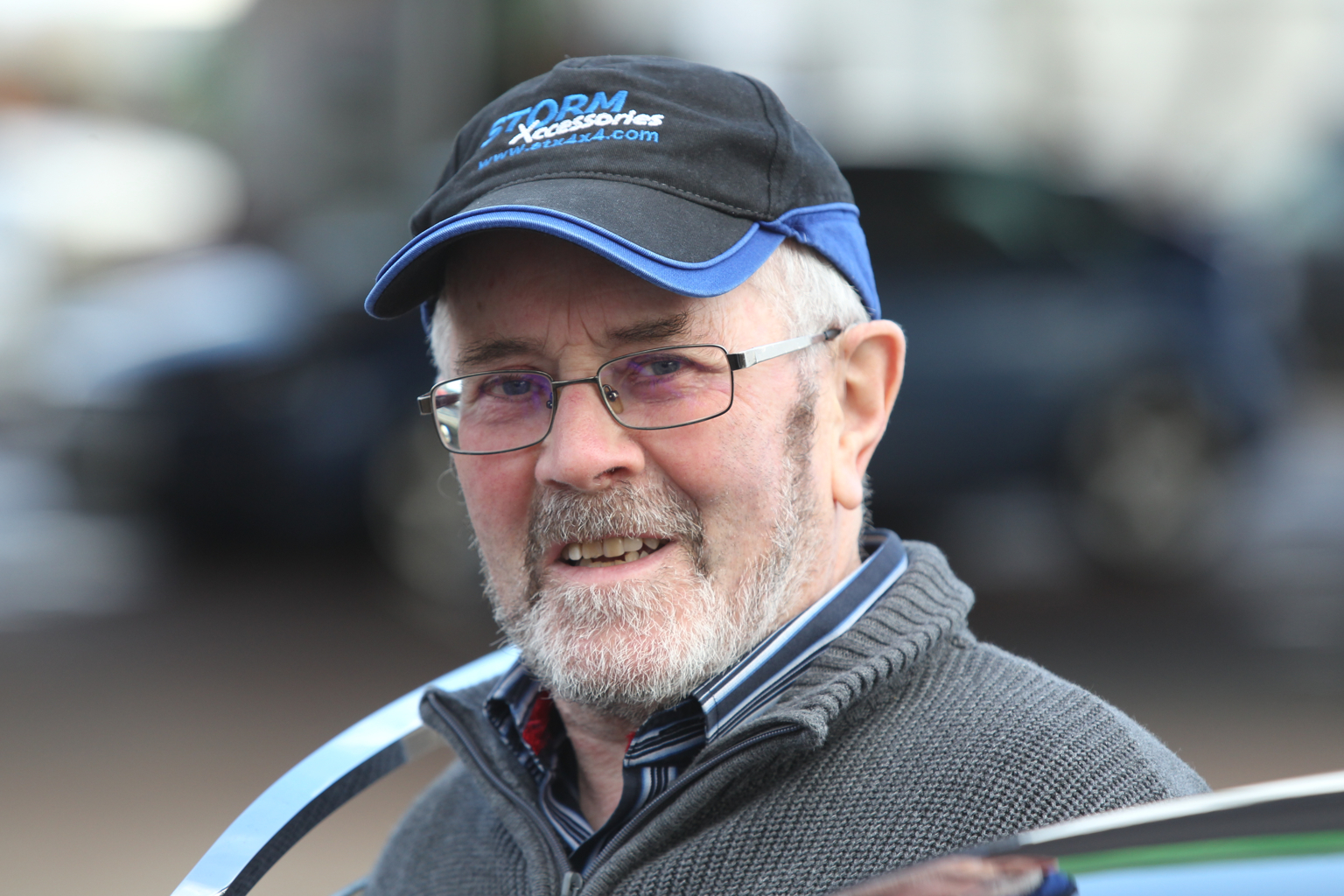 Paul Mc Laughlin out in his Jaguar for the vintage car run.

The toot of a minor and the twin of a jag greet them that take time to look at these fine collection of cars heading down the tank into Ramelton and across the Mall in their way to Fanad.

Easter Sunday Car Show at LYIT
Last Sunday they were out on the road but on Easter Sunday coming a good chance to see them they will be at their annual show which club member Fergus Cleary organises every year for charity at the LYIT car park in Letterkenny.