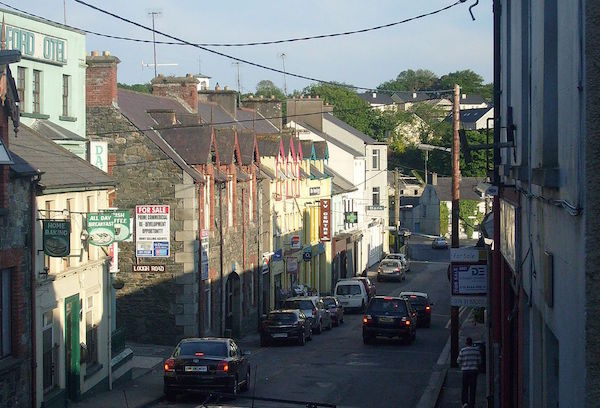 The business and commercial life of Milford has been dealt another body blow with the closure of McBride’s Supermarket and loss of eight jobs, including four part-time positions.

Located on Milford’s Main Street, staff said the introduction of the one-way system had a detrimental impact on the premises that formerly housed the town’s post office.

Some members of staff have served in the supermarket for over 23 years.

The McBride premises will close its doors at 2.00pm on Good Friday.

The current proprietor, Sean McBride has run the premises since September 2004 when he purchased the building from Hugh McClafferty.

The premises was long associated with the family of the late Benjo Hannigan and the post office and shop was a hive of activity with mail sorting, all night telephone exchange, post deliveries and all forms of transactions including pensions.

It served a clientele from far beyond the confines of Milford and it was seen as one of the town’s most progressive enterprises.

In former times it was seen as one of the pillars of the Milford business community.

Milford’s strong commercial hub of jobs and business added to the importance of the post office. A member of staff said that people came here to collect their pensions and it became a hub for the community.

“This week has been like a wake,” confess staff members as the sell off the remaining stock on the shelves.

Milford was once the jobs base for hundreds of workers: McMahon’s Garage: the Milford Bakery and Flour Mills: two banks: an ATM machine on the main street, the Prewood factory: a leading dance hall and cinema, shops, drapery and furniture stores and much more.

The local hotel in the town centre was the base for many travellers, political conventions and weddings and the town formerly had its own golf course

Like many Irish rural towns Milford’s decline has not been halted and the faded ‘for sale’ notices are a prominent feature of everyday life.

Footfall for many small business premises are a constant challenge to remain open as proprietors struggle to pay their rates and water bills.

Business proprietors point to Milford’s decline having become more obvious since a one way traffic system came into operation over seven years ago.

Speaking at a Letterkenny Municipal District meeting in October 2014, Cllr. Ian Mc Garvey referred to concerns of local business in Milford regarding the loss business due to one way system and asked that traffic arrangement in Milford be looked at.