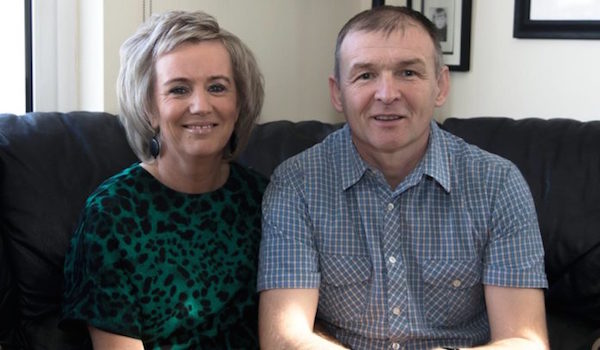 A Donegal couple innocently caught up in a Russian spy ring have warned others it could happen to them.

When Eunan Doherty opened his office door in June 2010 to find a garda standing there, many things went through his head.

But even the most far-fetched of imaginations could barely have imagined that he and his family were about to be embroiled in a Russian spy scandal.

Eunan, 50, from Ballyloskey, Carndonagh, his wife Maureen and their three children had gone on the trip of a lifetime to Moscow five years earlier. Now they were being told that their identities had been cloned and duplicate passports had been made by Russian spies.

Today, for the first time in an interview with the Irish Daily Mail, the now-retired fireman opens up about events that led to their passports being used in an international spy operation.

In the summer of 2010, US investigators broke up an alleged spy network with the arrests of 10 people in New York, Boston, New Jersey and Virginia.

All 10 admitted conspiring to act as ‘unregistered foreign agents’. Many had lived in the US under false identities for years.

The spies were later deported to Russia as part of a spy-swap deal which included the return of four people convicted in Russia of spying for the West.

Documents released by the US justice department at the time showed that one of the 10, who used the assumed name Richard Murphy, flew to Rome where he was instructed to collect a forged Irish passport in the name of Eunan Gerard Doherty before flying on to Moscow.

In April 2005, the family had sent their application documents to the embassy for visa approval ahead of their three-week trip to Moscow, which they thoroughly enjoyed — the Donegal man insists he remembers nothing ‘suspicious’ about the trip.

‘Our passports were never lost or in any other person’s hands while on our family holiday,’ he says. ‘It’s hard to know exactly where the passport was cloned and, I suppose, we learned a lot more about things later on.

‘The gardaí suspected that the passports, which had been sent to the Russian Embassy in Dublin to be stamped [for visa approval] had been cloned there. My passport then was the older type of passport, without the built-in security, and we had sent it to the embassy for the visa approval.

‘It was quite a long time after the holiday that all this started to come out. The garda at the door asked to come inside and he told me then what had happened. He explained that my passport had been used by a Russian spy and initially, I thought, we can sort this out pretty simply.

‘I took the garda to my home and showed him documents which we would have kept from the trip to Moscow. I knew there was nothing wrong on my side as we had just gone on a family holiday to Moscow.

‘It was just a matter of showing the gardaí that there was nothing improper on my end,’ he adds. His wife Maureen was later informed her passport had also been compromised. ‘The garda took copies of our flight itineraries and the dates of when we had travelled to Moscow. I was visited by the then head of passport control Joseph Nugent.

‘He travelled to our home here in Co Donegal and basically he had to replace all of our passports. At this stage, the kids had their own passports, but because they had been named on mine and Maureen’s passports, all our passports had to be changed,’ he adds.

Mr Doherty says now that, at the time, the garda investigation felt like they had to eliminate him from their inquiries, more than alert him to the identity theft.

‘It’s okay if you know yourself that you haven’t done anything,’ he says. ‘You like to think that justice always prevails as such, but you do hear stories where it doesn’t work.’

In October 2010, gardaí confirmed they were investigating the fraudulent use of six Irish passports by members of the spy ring.

A passport belonging to a female volunteer with the Irish charity To Russia With Love, which works with orphans across Russia, was among those implicated. All six passport holders had been granted visas at the Russian Embassy in Dublin, located on Orwell Road in Rathgar.

The investigation was undertaken in conjunction with the passport service of the Department of Foreign Affairs.

Richard Murphy was alleged to have collected an Irish passport in Doherty’s name in Rome, and then used it to travel to Russia. The passport was described in court as an old ‘transit passport’.

Murphy was born in Philadelphia and lived in New Jersey. During the case he acknowledged that from the mid-1990s, he lived in the US under an assumed name and took directions from the Russian Federation. Asked if he knew his actions were a crime, he told the court: ‘I knew they were illegal, yes, your honour.’

The Department of Foreign Affairs announced in February 2011 that the Garda investigation had concluded that: ‘There is an entirely persuasive picture of Russian intelligence service involvement in the manufacture and use of false documents based on the acquisition of details of six genuine passports belonging to Irish citizens.’

Acting on the Garda report’s findings, it was then decided that a diplomat from the Russian Embassy was to be expelled.

The Russians, however, appeared unperturbed by the matter — in fact, the Kremlin bestowed some of Russia’s highest honours on the ten returned spies.

This week, another mid-level Russian diplomat was expelled from the Russian Embassy in Ireland, with Taoiseach Leo Varadkar saying the decision for the expulsion was an act of solidarity with Britain. The Government said the diplomat was being expelled over the nerve agent attack in Salisbury, England, last month where former Russian spy Sergei Skripal and his daughter Yulia were poisoned.

However, the Russian Ambassador to Ireland, Yury Filatov, said the expulsion would ‘not go unanswered’. He described it as ‘unwarranted, uncalled for, senseless and regrettable’. And on Friday, Russia announced it was expelling an Irish diplomat from Moscow in a move the Irish Government said had ‘no justification’ and was ‘regrettable.’

In addition to the United States, at least 22 other nations have backed Britain by expelling about 57 Russian diplomats and intelligence officers, including France, Germany, Italy, Australia, Poland, Canada and Ireland. This was followed with 66 diplomats — the majority from the US — being sent home from Russia and the closure of the US consulate in St Petersburg.

In the Dáil, Tánaiste Simon Coveney defended the decision to expel the Russian diplomat following the attack in Salisbury. He said Britain’s assessment that it was ‘highly likely’ that Russia was responsible for the attack was compelling. Mr Coveney said it was essential for the EU to stand in solidarity with Britain.

Eunan Doherty agrees with the decision by the Government to show solidarity with the rest of Europe.

‘Given recent events, I think Ireland has to show that they are standing with the rest of Europe and especially when it is the rest of Europe — it’s not just Ireland and the UK,’ says Mr Doherty. The Donegal dad says he is convinced that the Russian diplomat who was deported in the wake of the passport controversy was the person responsible for copying his passport.

‘I think they were responsible for cloning Irish passports which were later passed on to Russian spies,’ he says. ‘The gardaí didn’t elaborate as to what they believe happened, but somewhere down the line it emerged that a Russian diplomat had been expelled from the country, it was a big thing. At the time, it wasn’t the type of thing you expected a country like Ireland to do to Russia.

‘I think they had to do something in response, in case it was seen that Ireland was an easy target.’ Though the Doherty family was issued with new passports, the identity theft still has ramifications for them, particularly when travelling abroad. And the fact that the perpetrator was caught red-handed is of cold comfort to Mr Doherty, who is still nervous about what might happen when he produces his passport because of the illegal use of his identity.

‘What really bothered me, more than anything else, was the consequences of what was going to happen in the long term,’ he says. ‘Really you only have one ID, you are whoever you are in your passport and in my eyes that had been compromised with the clone from the Russians.

‘I was afraid that it was always going to be an issue when travelling and that is always how I felt. It was the notion that something might happen when I was abroad — would I be pulled up over something I didn’t do?’

The imposter, he says, put him in danger of being arrested and detained, according to the gardaí who were dealing with the case. ‘At the time that all this came out I was told that if I had been on holiday in America, then I would have been lifted and detained,’ Mr Doherty says. ‘There would have been no questions asked until they had their information. I was quite lucky that I was at home when all this went down.

‘There was the potential that I could have been arrested through no fault of my own but because of the fact that someone else was posing as me — an imposter,’ he adds.

Indeed, in spite of the fact that the powers that be knew Mr Doherty’s passport was cloned, he was told there was no way of guaranteeing himself or his wife safe passage in other countries.

‘There’s no such thing of, here’s a number to ring, if you get stopped at a border control, so that was worrying,’ he admits. ‘Seemingly, it’s up to every individual border control officer to decide if they think a person is suspicious. A piece of paper is not going to change that I was told,’ he says.

For Eunan Doherty, this still seems almost unbelievable — that a council worker from a small town in the northwest of Ireland could be caught up in an international spy scandal that reads like something from a James Bond thriller. But it is proof, he says, that Ireland is no different from any other country in that it is not unsusceptible to espionage, regardless of any neutrality.

‘It shows that we are not immune to, as in my case, having an Irish passport caught up in an international spy ring,’ he says. ‘I think recent events have opened a can of worms — that we probably don’t have the facilities to look after our own national security or we think that nobody is going to be interested in Ireland.

‘If you look at it, Ireland is probably a very easy place for Russians to look on other people. For 99.9pc of people here in Ireland, if you talk about a Russian spy ring, they would say, “sure that would never happen to me.”

‘But I’m proof that it can, and we as a country need to be more self-aware.’