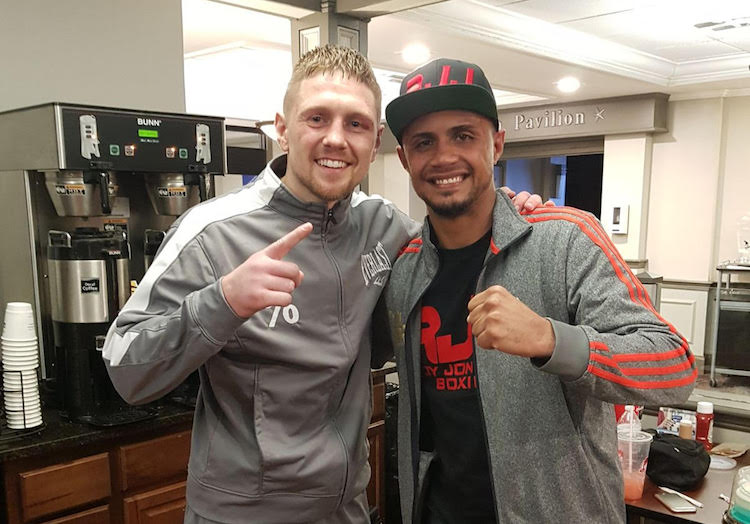 Jason Quigley ready to take on the world after Easter KO

JASON Quigley says the world’s his oyster after his latest KO win.

Quigley returned after a full year out of action with a deadly destruction of the durable Daniel Rosario in Quincy.

Rosario felt the full force of a bloodthirsty body blow from Quigley’s left hand and ref’ Mike Ryan stepped in to call a halt two minutes and 51 seconds into the sixth round.

“He looked weak to the body and that was the game plan,” Quigley, back in the ring after surgery on an injured right hand, said.

“After four rounds, I thought I was starting to wear him down and had weathered the storm. He came on strong again. He kept coming and coming.

“The right hands were working to the body. I landed a few and heard him wincing. The left hook to the body came out of nowhere. It’s not a shot I normally have.

“They call me ‘El Animal’. That name is changing, but I showed tonight that I am an animal.”

Rosario, just about, answered a count earlier in the sixth, but there was no coming back when Quigley, now trained by Dominic Ingle, nailed him again.

The Golden Boy Promotions ace said: “There was no reverse in Rosario.

“Coming into the fight, I knew he was one tough cookie. He was never beaten convincingly. That just goes to show what I’m made of.

“I did what I had to do. I’ll look at things I can better myself on and the world’s our oyster.

“This was another big learning experience and this is time to push on and get better. Bigger things are around the corner.”

Quigley spent 373 days waiting for the moment after having to bide his time since his title win over Glen Tapia last March. When it arrived, he didn’t disappoint.

“This was the perfect fight for me to get back and see where I’m at. I took him out when I got to work. There were doubts letting the right hand go. I landed early and hurt him early. I could see him wincing.

“They call me ‘El Animal’. That name is changing, but I showed tonight that I am an animal.”

On the same card, Mayo light-welter Ray Moylette improved to 9-0, 3KOs with a points win over Matt Doherty.

Moylette had a magnificent fifth round and looked on course for a stoppage at a time. Doherty saw it out, but Moylette was a comfortable winner.