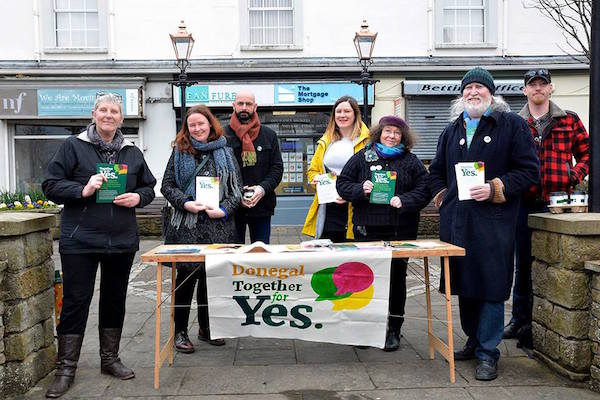 The Donegal Together for Yes campaign have said men have a duty to vote and to do so in support of the women in their lives.

The group held information stalls in Letterkenny and Buncrana on Saturday handing out information leaflets and answering questions the public have about the referendum to remove the Eighth Amendment from the Constitution.

The issue of men voting was a major issue in both locations.

Sinead Stewart, spokesperson for Donegal Together for Yes, said this is a decision for both men and women.

She said “Abortion is still seen as a woman’s issue and while this is true when it comes to the final decision whether to have an abortion or not, the majority of women accessing abortion services are already mothers and in relationships and so men really are a part of this decision making process. They are the ones who travel with their partners, or stay at home to mind the children they already have. This is a decision for both women and men.”

“We’re all equal at the ballot box, men have a duty to vote and to do so in support of the women in their lives, their sisters, their wife or partner, their mother and aunts, their daughters and granddaughters, their friends.”

Nora Newell, Donegal Together for Yes Spokesperson, went on to talk about a man at the stall in Letterkenny who said that he “hadn’t really given any thought to the issue of abortion until his wife was told that there was a problem with her pregnancy and that their child would probably not survive beyond birth.

“This caused them both such upset and distress as this was a much longed for child. They were then faced with having to travel to the UK as abortion healthcare was not provided here in Donegal. The man said that it was then that he realised that the only way that we can genuinely care for a family like his is to repeal the Eighth Amendment and to provide a full range of pregnancy healthcare in Ireland, including abortion.”

Sinéad Stewart, Inishowen Together For Yes Spokesperson, said she feels very encouraged following the information stall in Buncrana on Saturday.

“In general, more people are engaging with us and talking openly about the referendum and the consequences the Eighth Amendment has imposed on everyone, not just women in this country” she said.

She went on to say “I had one very touching conversation with an older man in Buncrana at the stall who was visibly moved.

“He had heard we were in the Market Square and wanted to come and thank us for taking the time to be there and inform people about the realities faced by by both women and men. He told me he would be very definitely voting yes in the referendum, because ‘you know all about it when tragic circumstances come to your own door.”

Donegal Together for Yes point out that whichever way people vote on 25th of May that women will still have abortions. By voting yes we will be able to provide compassionate healthcare here in Ireland and this is the decision the people of Ireland must make on May 25th. “It’s time to look after our own, at home” said Ms Stewart.

The referendum will be held on the 25th of May and polling stations will be open between 7am and 10pm.

People should check that they are registered to vote and they can check the register in any council office, post office, Garda station or public library.