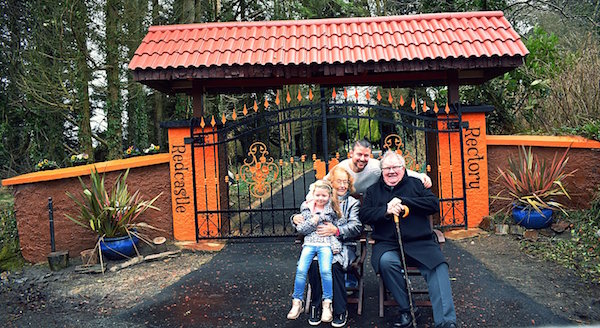 An Inishowen man has carried out a unique renovation project in the hope that young people may follow his example.

Kristian Shortt often passed by the downtrodden gates of Redcastle Rectory without a thought.

But something recently suggested to him that the gates of the old cemetery could look so much brighter with a bit of care and attention.

So, with the permission of Fr Mailey of Drung Parish, he set about work on renovating the historic gates.

The gateway has served as an entrance to this Old Rectory since around the middle of the 19th century.

It provides the entrance to an Old Georgian Rectory and served as a clergy house for Priests throughout the 19th and some of the 20th century.

It has an adjoining cemetery also, a typical feature of old-style rectories from that era. 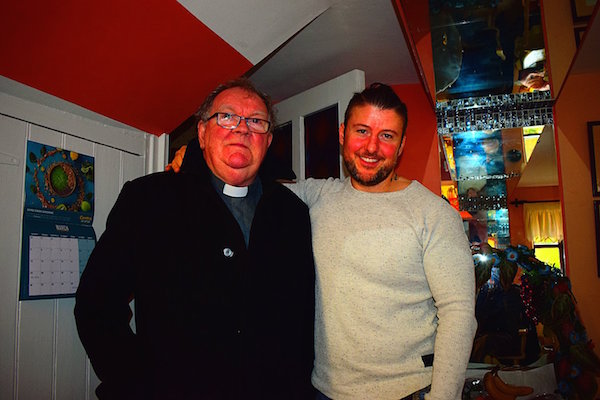 Kristian explained “I took it upon myself to really renovate and restore this old gateway to its former glory after decades of depletion. Now it stands colourful and radiant again with colours it has never dawned before and I believe it’s the most elegant and historic gateway to any house in the whole of Donegal, or maybe the whole country.

“And the inspirational message I wish to relay to people and children is that doing this and other innovative deeds like it, has a very enlightening effect on the soul. Creating something out of nothing is by far one of the nicest feelings on Earth. And doing it under the eyes of your children to admire it makes it all the more purposeful and enlightening.”

Father Mailey was delighted that it was completed in time for Holy week in his parish and he came down on Easter Sunday to give his blessing to the old gate.

Father Mailey agreed that many priests would have walked under those gates in decades gone by.

“Those Priests, even though long gone, would feel a sense of pride in their old gate as it stands tall and bright for all to see,” he said.

He added that he hopes his small example may prompt others to get out from behind their computer screens and do some small act of goodness.

“Whether it was the attacking of the lady from the Buncrana Pier tragedy for desiring to sue the council, to burying themselves unnecessarily in a celebrity rape case, to focusing on what Trump or other politicians are doing wrong…people are tending to engage in and focus on the wrong things in life, especially the younger generation.

“And too often, just like when I built the biggest snowman in Ireland, there were no children out playing in the snow like they did when we were growing up. They would prefer to sit inside now and look at TV and computer screens.

“For me, this sparkling new gateway marks the beginning of Spring and Summer and a time to give life to things and to people, not obsess on the petty foibles of others. And with doing the right deeds in life and creating things which can be an inspiration to our growing children, the happiness within ourselves can grow, and we won’t seek to hurt others or to feed the negativity that exists around us.

“And Father Mailey of the local Drung Parish embraces this message wholeheartedly and is very happy to put his signature on such a positive message to our young generation, and so he gladly came and gave this old Rectory Gateway his blessing on Easter Sunday.