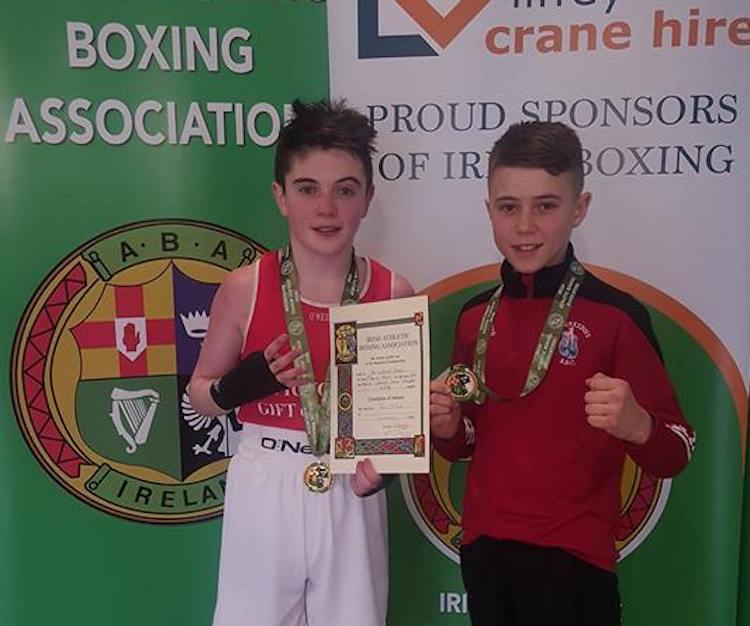 Letterkenny ABC was celebrating on the double at the weekend as Dylan Browne-McMonagle and Paddy McShane scooped Irish titles.

Browne-McMonagle, who has also made headlines of late as a talented jockey, collected the Boy 4 39kgs title while McShane landed the Boy 4 42kgs crown.

Both Letterkenny punchers took 4-1 split decisions in their finals.

Browne-McMonagle defeated Fr Horgans man Shane Stokes in his decider to continue his excellent form in these Championships.

A week earlier, he had inflicted defeat on Christopher McEvoy from Donore in his semi-final, Browne-McMonagle getting the nod from all five judges.

McShane won his fourth Irish title as he overcame Aaron Kirwan-Doyle from The Ballagh in his final.

McShane is now stranger to the big stage in Dublin and, having beaten Monivea’s John Ward last weekend, he topped the pile once more in the capital. McShane is certainly making a rapid name for himself.

There was no joy, however, for Illies Golden Gloves duo Lee Davidson and Jessie Callaghan in Junior 1 deciders.

Davidson lost out to John Joyce from Olympic Mullingar 5-0 in the Junior 1 39kgs final.

At 48kgs, Callaghan was beaten 5-0 by Kilkullen’s Aodhan Byrne.

There was, though, celebration in Donegal for that one with Byrne having strong bloodlines to the county, via his mother, Sinead Long, who hails from Ballybofey.