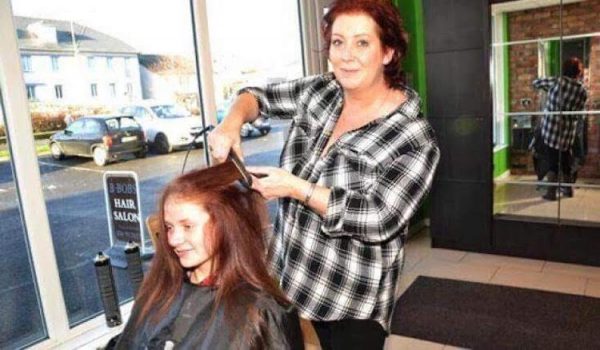 A cut above: Brigde bows out at B-Bobs after 25 years

When the 13-year-old Brigde Lavery was given a straight choice – get a career or stay in school – by her father, the answer was simple.

She spent her weeks between school, at the old ‘Tech’ in Letterkenny, and working part-time in a restaurant in Derry; a job she’d held since the tender age of 11.

Frank Lavery had his mind to the future for his young daughter, who had previously been at Coxtown NS in Carrigans. His advice was to the point: ‘You’ll not give up school to work in a restaurant’.

“He would only let me leave school if I got a job with a career,” the now Brigde Lavery-Diver says, 40 years on, as she closes the latest chapter.

At Finn’s Hairdressers on the Diamond in Derry city, Brigde was to begin a career that reached its height following her founding of B-Bobs hair salon 1992. After 25 years, Brigde stepped away from B-Bobs recently and rinsed out with no regrets.

“I never thought much about the 25 years, but I’m proud of it. B-Bobs was one of the busiest salons in the town and we did an awful lot. It gave me so much. I made some great friends out of it.

“I just felt that after 25 years that I needed something else. I didn’t want to be the boss anymore.  I just wasn’t happy being the boss. It tied me a lot.”

Her story began in Finn’s, where she earned the princely sum of one punt per week as she learned a trade that would eventually see her make it to RTÉ’s Live At Three show.

After four years in Finn’s, she was picked up by John Deery’s, based at Austin’s Department Store, before being offered a job at Whispers, a business that is still going on the Diamond to this day.

“I knew from there that it was for,” she smiles.

“I loved my time in Whispers.

“At the start, I didn’t have any interest in hair and I didn’t want to be a hairdresser. All I wanted was money to get to The Grill on a Saturday night! It was years before I made enough to get out.” 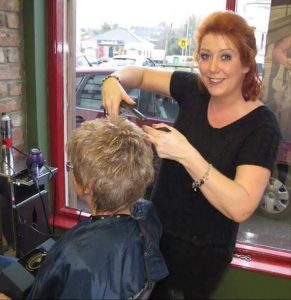 Brigde in familiar pose at B-Bobs

The tricks of the trade of the early days remain central to her work.

She was the last apprentice trained by the Finn’s, who also had Mary McDermott, now of Streaks Ahead, under their wing.

“They were very old school, but some of the stuff they taught us we still do,” Brigde says.

“That’s what I like about the trade. There are people out there who are hairdressers, but they don’t know anything about hairdressing.

“Now, people are drying and straightening the hair before they cut it. It’s changing again. For a long time, people became hairdressers without learning the craft.”

She talks of scissor combing, curling and perming – ‘the real hairdressing’, as she puts it – with an enthusiasm that could only come from experience.

While in Whispers, her mother, Rose, became ill and passed away. Her enthusiasm waned in those dark days, when, as she says ‘I was just fed up’.

Light came peering through the clouds, though. Geraldine McCroary, who co-owned Whispers with her brother Brendan, was taking over La Chique, an established salon in Letterkenny,

Brigde had the bug again and helped run La’Chique Nouveau until 1992 – when B-Bobs was born.

“I decided I was going to look at starting my own place,” she says, “but I couldn’t get a loan because there were so many hairdressers in Letterkenny. There were 32 at the time.

“The bank manager said I’d never get one so I scrapped the idea and went back to work. My boss found out, while I was on holidays, that I was thinking about starting out on my own. He said that he ‘owned’ me for five years and that I couldn’t move. I just went around the shop, lifted my scissors, comb, everything, and away I went! 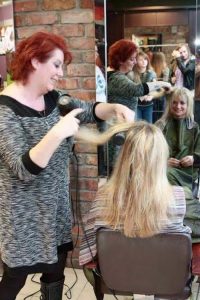 “I went back to the bank manager and he told me that if I got him 2,000 punts that he’d give me what I needed. Donal had a car that worth about 5,000 punts. We put the car into the Derry Journal for sale and it was sold that Friday. I gave in the money and got a loan of about 4,000 punts to start up B-Bobs.”

A neighbour in Killea, Mary Duffy, suggested the name ‘Bits and Bobs’, but it was her father who gave the added touch and, so, B-Bobs came into being.

Her first customer in was Bernie Gallagher, who remained a customer throughout her stay in B-Bobs, while her first male customers were a local band, Ego Minefield.

“I have some very loyal customers,” she says.

“When I was training, the neighbours allowed me to do their hair. I’m still doing hair for them. you can’t keep everybody, but I kept a great base of clients since the start.

“The customers made the place a success. You need a long-standing clientele. Passing trade is fine, but the regulars keep it going when things are quiet.”

In the early years, even RTÉ took note about the success of B-Bobs. Three hairdressers were selected to appear on Live At Three. One from Dundalk, another from Dublin and a third, Brigde, from Donegal. 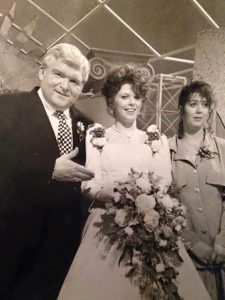 Brigde (right) on the set of Live At Three

So impressed were the producers that they called her back a second time a few months later.

“That was the first time that the same hairdresser was back on the programme,” she says.

“It was a great experience. And it was good for business. If that happened now you could make such a big deal on social media with something like that.”

One of her lasting legacies from her days in B-Bobs will be the charity contributions. For 11 years, since they first began in 2006, the B-Bobs charity day became an integral part of the calendar each November, raising north of €50,000 for local charities in the process.

The Good and New cancer bus was the prime benefactor each year alongside an additional charity or two, usually geared towards mental health; two charities that are close to her own heart following the loss of her father to cancer and in honour of her mother, who suffered from schizophrenia.

“All the girls who ever worked for me were brilliant with the charity day,” she says.

“They did so much for it and never expected anything for it.

“It became a part of the business and there was great fun around it. Other businesses in town were brilliant supporting it as well, giving out spot prizes and donations.”

Brigde had her own battle to fight when she was diagnosed with ovarian cancer a number of years ago.

“It was shocking to get that diagnosis, but I was lucky that they got it early. I had a year where it was just chemo, treatment and operations.

“The business was the least of my worries, but it was still a worry. Things were getting quiet.

“It took a couple of years to pull it back up. I had great staff at that time, though. Veronica (McGinley) was just amazing during it all. She ran the whole show. Customers were very good and very patient – but they still wanted their hair done.”

After being diagnosed with the BRCA gene (a test to determine susceptibility to breast cancer) , Brigde, who is thankful for the love and support of her husband Donal and children Alice, Rosie, Keenan and Ginny, had to undergo a double Mastectomy after the turn of this year – something that helped make her decision to walk away easier.

She says: “I couldn’t stand the worry about the business again. I decided that the time has come and I’m delighted I made the decision.”

Recently, B-Bobs has undergone a change of hands and is now operating under the watch of long-term B-Bobs employee Veronica McGinley, with a new name – Ricky’s – above the door.

Brigde is unsure as to her next move in life, but it’s unlikely that she’s made her final cut.

A cut above: Brigde bows out at B-Bobs after 25 years was last modified: April 6th, 2018 by Chris McNulty
Tags:
B-BobsBrigde DiverKillealetterkenny