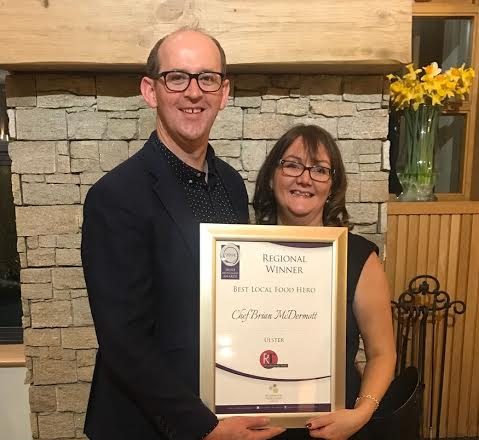 Brian – who is fast becoming known all over Ireland as the voice of Donegal food – is famous in his home county as a tireless supporter of local food producers and the food and hospitality industry.

The top award of the night and the only one to be awarded on a province-wide basis, the Local Food Hero recognises an individual who promotes food culture in their locality and inspires people to get involved with food.

“They may be actively encouraging the restaurants in their area to use local produce, or perhaps they are working to attract food tourists by creating food trails and markets,” the organisers said.

Brian said he was “overwhelmed” to be named Ulster’s Local Food Hero.

“This is the culmination of the most incredible three weeks in my career,” he said.

“As a chef my ethos has always been to promote local food producers, local growers and local restaurants.

“We’re lucky in Donegal, because we’ve always had incredible food right on our doorstep, and that’s a message I’ve spent my career trying to get out to a wider audience.

“I’m genuinely overwhelmed that I’ve been recognised in this way,” he said.

“I have to give all credit to the people of Donegal,” said Brian.

“This isn’t just my award, it’s their award, and it shows that the things we value here in Donegal – hard work, integrity, commitment to quality – really do pay off.

“I’ve had a great reaction to the book from all over Ireland and further afield, so I think the secret of Donegal cooking really is well and truly out!”

It’s the culmination of the busiest month in Brian’s professional life, as he

Brian – who was nominated by a member of the public – received his award at an events ceremony in the La Mon Hotel and Country Club in Belfast on Wednesday night.

135 awards were presented in categories which included Best Casual Dining, Best Emerging Irish Cuisine, and Pub of the Year in each county.

Adrian Cummins, Chief Executive of the Restaurants Association of Ireland (RAI) said the Irish Restaurant Awards continue to showcase the exquisite and admirable calibre of food available in restaurants and pubs nationwide.

“Online nominations have increased from 9,000 in 2013 to over 80,000 this year and with the increase in interest comes an increase in standards, making the judging process more difficult than ever,” he said.

“Our small island boasts everything from fine dining to high quality gastropubs, from the exotic taste explosions of world cuisine to the comfort of traditional dishes.

“We have an appreciation for what we eat, for the journey of our food from farm to fork, and for the dedication of those working in the food industry to serve up Ireland’s finest food.”

Brian now qualifies for the all-Ireland award in May.