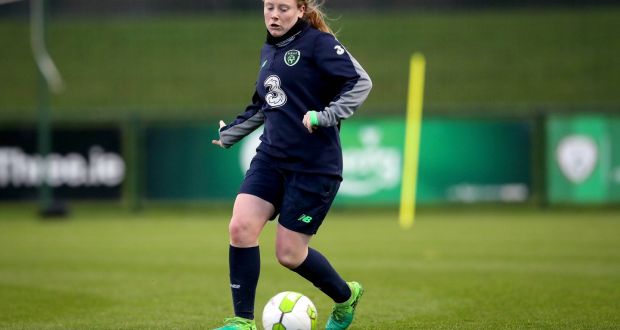 Amber Barrett was just a nipper in primary school when a Republic of Ireland senior team played at a World Cup – and the Milford woman hopes to fire the senior women’s class of 2018 to the big stage.

Barrett recalls mimicking the likes of Robbie Keane and Damien Duff during Ireland’s World Cup campaign in 2002; Keane’s late goal against Germany in Irbaraki and Duff’s bow to the crowd in Yokohama the memories of the young Barrett.

Talented all-rounder Barrett, who only made her senior debut last autumn in the away win over Northern Ireland, is eyeing up qualification ahead of two massive games in the coming days.

“It would be a dream come true,” Barrett told Buzz,ie.

“Everyone did the Robbie Keane in the garden or the bow of Damien Duff. Everyone has those aspirations. To get to a World Cup would be huge for us.”

In the corresponding away games, Ireland won 2-0 in Slovakia and earned a heroic 0-0 draw with the Dutch in Nijmegen.

Barrett has been impressed by new Irish boss Bell and said: “So far so good with preparation. Everything has worked well. Spirits are really good and alls guns are blazing for Slovakia.

“Colin gave me my first break. He seen something in me and he put trust in me. I had to go prove him right.

“To go and play against the European champions in front of 14,000 people was quite daunting. Colin instilled so much belief in us in the weeks coming up to it. We knew we were that well prepared that we were capable of getting a result.”

Listen to the full interview on the buzz.ie podcast below …