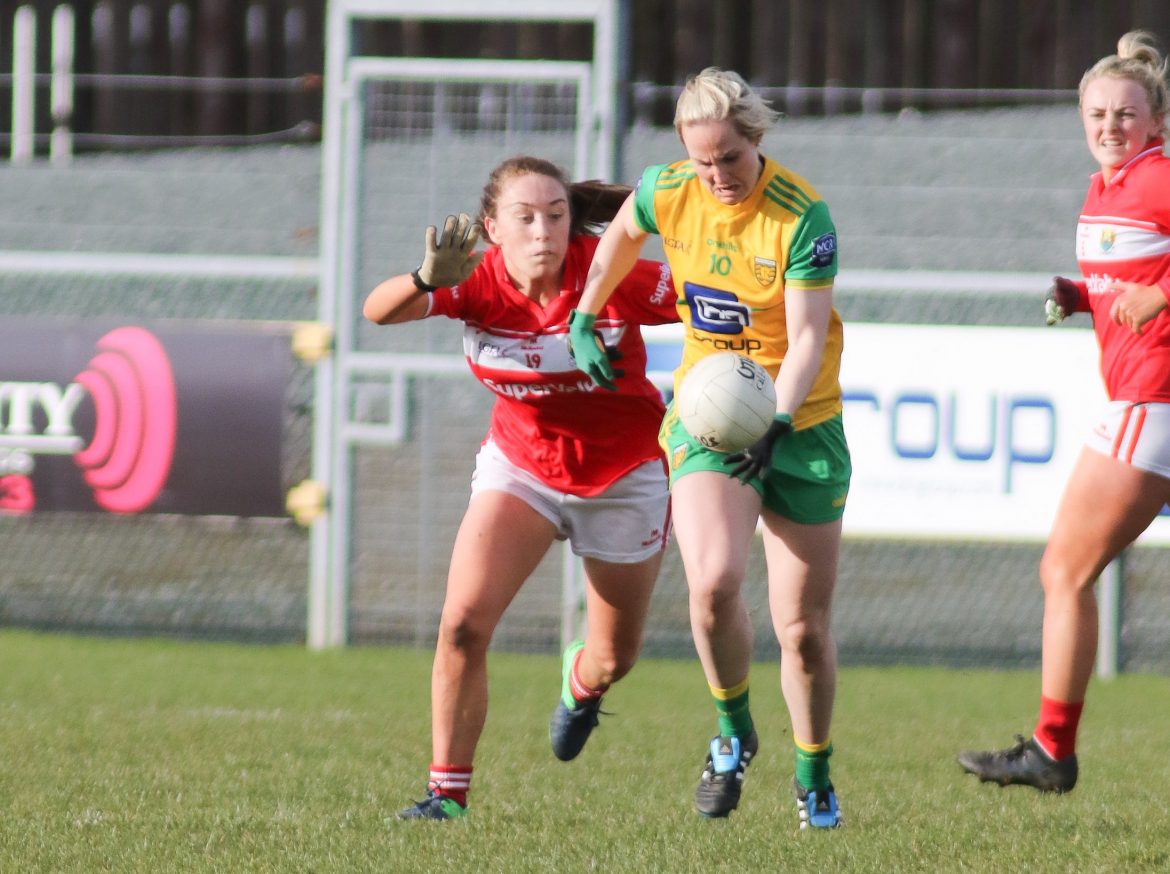 DONEGAL KEPT THEIR slim chances of a semi-final place in the Lidl National Football League Division 1 with comfortable victory over Cork in Letterkenny this evening.

The result means Donegal will have to hope that Galway fail to beat Westmeath tomorrow, while Cork’s place in the last four was already assured.

If Galway win, they and Donegal would finish level on 13 points each but Galway will go through having kicked more points, in their 0-16 to 1-13 draw against Donegal. 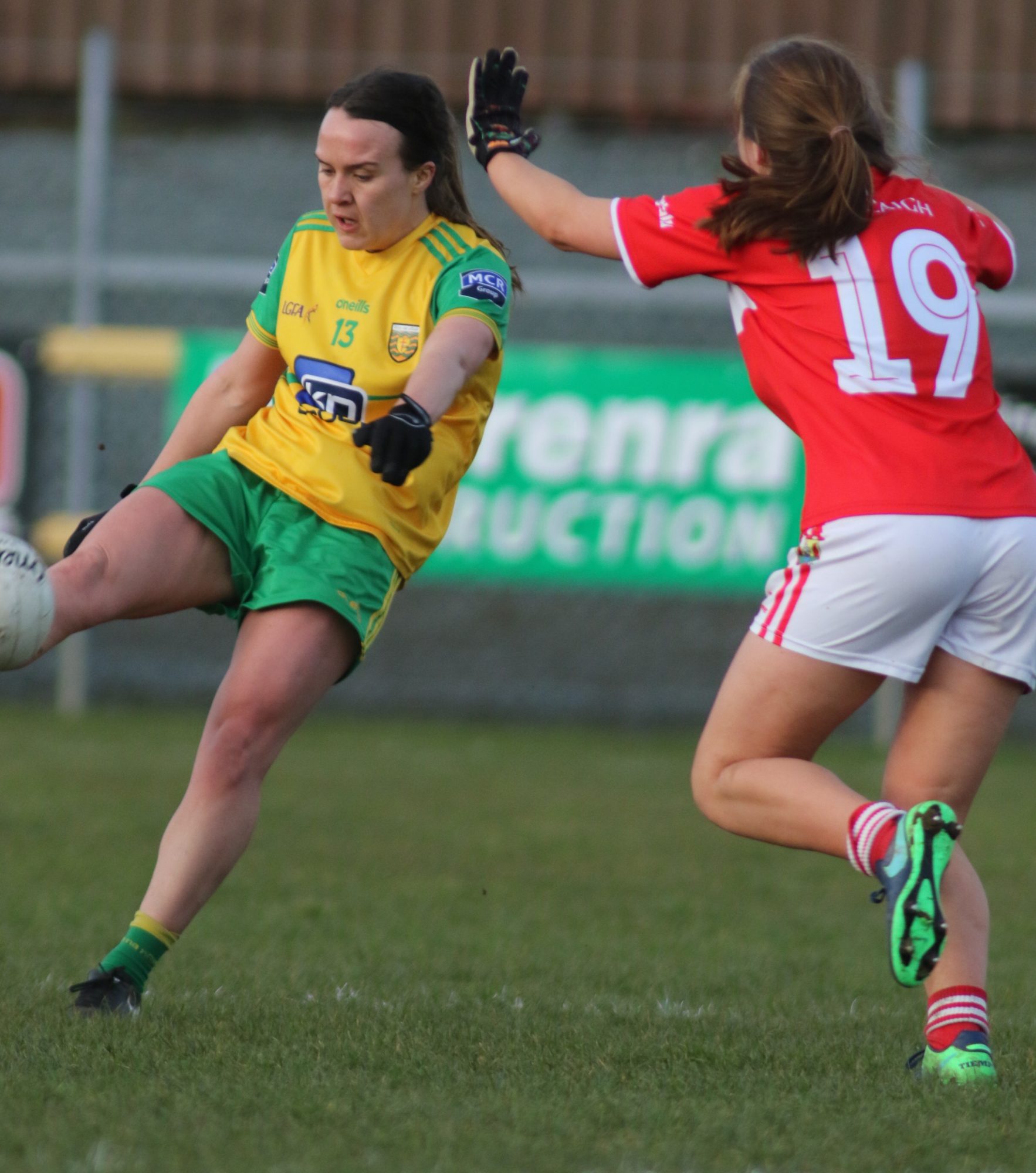 Today, Yvonne Bonner (nee McMonagle) grabbed 2-3 while Niamh Hegarty chipped in with two goals and last year’s league champions Cork failed to score in the second half until Niamh Murphy was on the mark 30 seconds from the conclusion.

Early points from Karen Guthrie and Katy Herron settled the nerves for the hosts before Cork got off the mark in the ninth minute though a score from Aisling Hutchings.

However, Donegal possess a serious goal threat and on 11 minutes Bonner rounded Martina O’Brien to scored the opening goal of the game following a flick from former Republic of Ireland soccer international Ciara Grant to establish a 1-2 to 0-1 lead.

Orlagh Farmer, though, at the other end struck a tremendous goal in off the underside of the Donegal crossbar just six minutes later having been frees by Laura Cleary. Then, Aine O’Sullivan grabbed a second Cork goal on 20 minutes from close range, smashing past Laura Gallagher  when Aoife Nic a Bhaird passed the ball on.

That put the visitors 2-1 to 1-2 ahead but Donegal soon turned it around with a free from Bonner and then a 22nd minute goal from a penalty by Niamh Hegarty when Guthrie had been hauled down by Sarah Leahy.

Points from Bonner and Grant meant Donegal went in 2-5 to 2-2 in front. 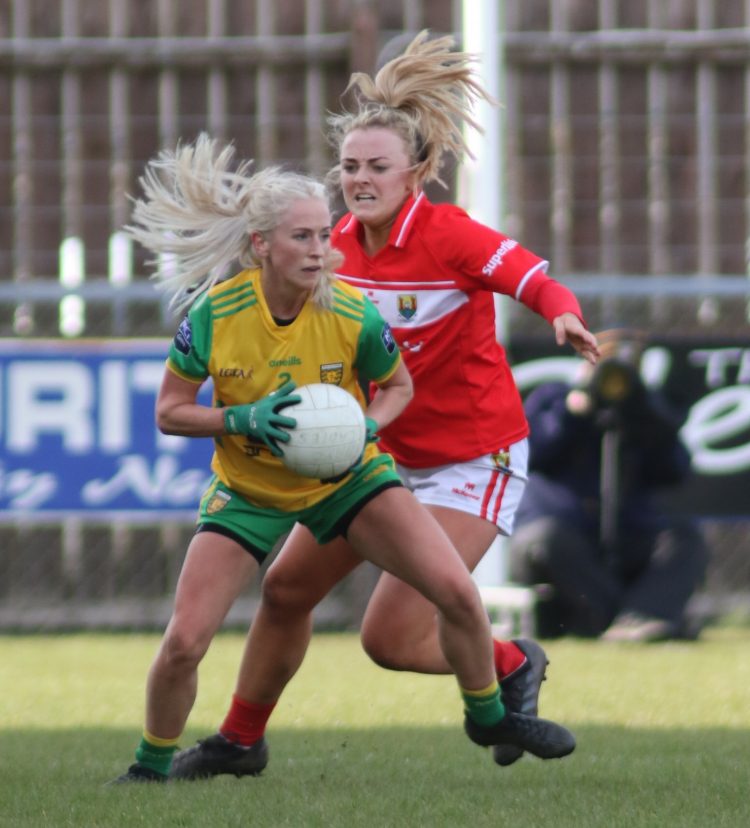 Geraldine McLaughlin opened the second half with a point inside of 30 seconds and Bonner, Grant and Niamh Hegarty points edged Donegal seven in front by the 40th minute, 2-9 to 2-2.

With Cork having been kept scoreless in the second half, Donegal goalkeeper Gallagher made a fine stop from O’Sullivan and from the resultant break, Bonner finished off a flowing move to edge the hosts 3-9 to 2-2 in front.

Niamh Hegarty scored her second goal of the evening from a rebound after Geraldine McLaughlin’s penalty was saved by substitute goalkeeper Caoimhe Moore seven minutes from the end. McLaughlin had been taken down by Eimear Meaney.