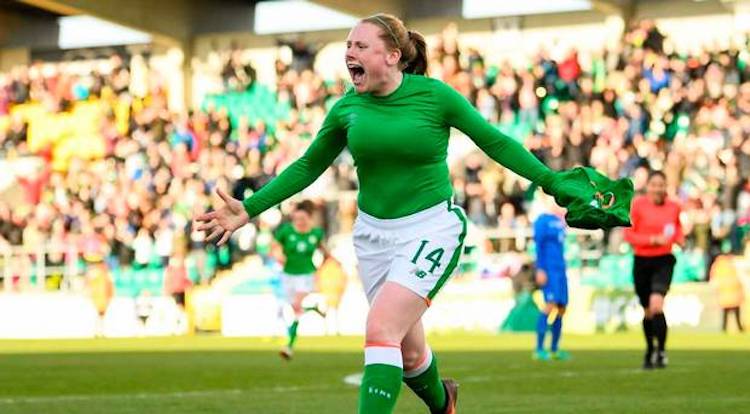 Amber Barrett seized the moment last night to blast a memorable winner as the Republic of Ireland maintained their push for World Cup qualification.

The Milford woman was on the field for just nine minutes when she scorched home her first senior goal to seal the 2-1 win.

“I don’t know what was going through my head, I just looked up, saw the goal and I put everything I had through it,” Barrett said.

“As soon as I got the header down, an extra touch would allow a defender to get in. I just smashed it and thankfully got enough power behind it to put it into the net.

“I’ve been in a lot of places and that roar that went up is something that won’t ever leave me, the buzz and support around was amazing. It was a massive result for us.”

Ireland had taken an earlier lead through Leanne Kiernan, but an own goal by the unfortunate Marie Hourihan, the Ireland goalkeeper, had Slovakia level before Barrett struck.

The Peamount United striker said: “We showed a lot of character up to that point. The girls just dug really deep and deserved that victory.

“Colin had us well rounded and we knew Slovakia would give us a game. We were starting to wonder where a goal was going to come from. We found the little spark from Leanne and the belief went up.”

The Girls in Green are without a number of key players, including St Johnston’s Tyler Toland – who injured a wrist on Tuesday – Harriett Scott and Stephanie Roche.

Barrett said: “That shows the strength in depth that we have. Girls are willing to step up to the plate.”