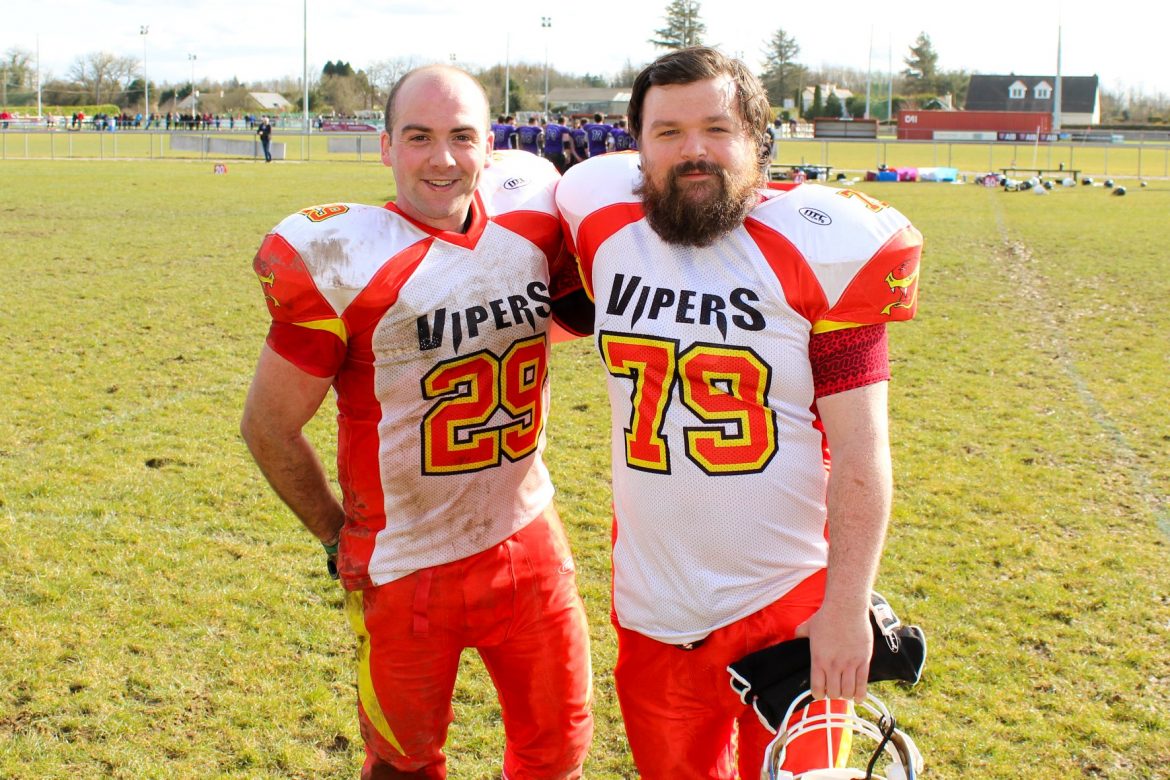 My Donegal… with Cathal Curran

Carrigans native Cathal Curran (pictured on the left) is currently working in marketing for the Kernan Group and as a personal assistant at the Donegal Centre for Independent Living.

This is Cathal’s Donegal…

(1) What is your favourite place in Donegal and why?
It has to be Century Cinemas Letterkenny, we have great sights and scenery in Donegal but I enjoy my movies and popcorn a bit too much.

(2) If you could change one thing about Donegal what would it be?
Just the weather, we have it all bar that, if we had 15/18 degrees 7 days a week it would be great. Not too warm either though, need a breeze for drying the clothes!

(3) Who is the one person that you look up to and why?
Has to be Frieda Gallagher. She’s a great woman altogether, very patient and a rock.

(4) What’s your happiest memory in Donegal?
Playing our first ever game of American football in Letterkenny at Coláiste Ailigh. Vipers V Galway Warriors. There was so much work put into it and we won well, there was a large crowd there to support us and it was excellent weather, it was a great day.

(5) What has been Donegal’s proudest moment in recent years?
Winning the 2012 All-Ireland Final and the manner in which they did it, it changed the way football was played and give the county a huge lift.

(6) If you found a magic wand that allowed you to grant one wish, what would it be?
A self-cleaning house with a self-starting fire in the evenings, that’s all I’d ask for.

(7) What is your favorite Donegal-made product?
McDaid’s Football Special.

(8) Who is Donegal’s greatest ambassador around the world and why?
Has to be our Daniel. Great advertisement for Donegal people and can fill stadiums in America. County singer David James is not far behind him though.

(9) What has been the biggest compliment you’ve ever received?
“It looks like your hair is just cut in tight, no way of knowing you’re going bald like”, from my girlfriend Frieda Gallagher, don’t know if I believe her.

(10) Who is your favourite Donegal sportsperson of all time?
Mark (Ruction) Callaghan from Newtowncunningham. He was unreal at both Gaelic and Soccer, never gave up in games and always had time for younger players. Fantastic leader and made people around him better players. His brother Marty Callaghan is up there also for all the same reasons. In case they are reading, they would be great additions to the Vipers!

(11) What is your favourite Donegal restaurant?
Kernan’s Diners, Newtown and Drumkeen.

(12) What is your favourite Donegal saying or expression?
“Hard to bet a cuppa tae sir.”

(13) What is the biggest challenge facing the people of Donegal today?
Our aging population and care of the elderly, unless money is invested into assisted living communities and the health service there could be a lot of issues to come.

(14) What is your favourite food that you associate with Donegal?
Hard to beat my mother’s stew on a Sunday, that’s as Donegal as they come.

(15) Is there anything that really annoys you about Donegal or its people?
The roads could be a lot better and the broadband speeds, apart from that and the weather we have a grand wee spot here in the hills.

(16) Do you have a favourite local band?
David Craig.

(18) Where’s the most unusual place you’ve logged on to Donegal Daily?
A meat factory in Townsville, Australia up the Sunny Coast.

(19) Is there anything about Donegal that you are very proud of?
The Donegal Sports Star awards are a great example of how highly regarded the county feels of its local stars across all types of sports in the county. Donegal do this extremely well.