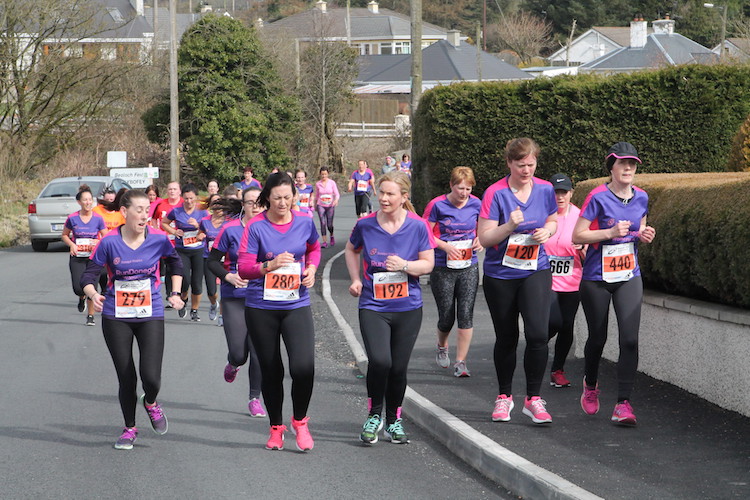 The twelfth staging of the event attracted a record number of 780 participants.

Race director, Grace Boyle, who established the annual race/walk with Bridgeen Doherty in 2007, said everything came together well on the day.

“This year’s Run Donegal Women’s 5k was launched at the start of March and things moved on steadily since then. So many people remarked on the great atmosphere about the Finn Valley Centre before, during and after the race. I was speaking to one of the hospice nurses and she said that normally when you go to an event like that, everyone is in a rush to get away. But nobody was rushing away anywhere on Sunday,” Grace commented.

“We had 600 pre-registered before Sunday, with 180 more registering on the morning of the event. With so many having entered before race day, it took a lot of pressure off. We were also so lucky with the weather too – it really was the perfect morning for it,” she added.

“We had a registration night in Letterkenny and I’d like to thank Liam O’Donnell and his staff for facilitating that. Finn Valley AC were a great help since the launch and we had the run of the centre for the day on Sunday. Thanks also to the Donegal Sports Partnership for their ongoing support. The help of so many individuals combined to make Sunday’s event such a success.”

The event was run in memory of Lisa McGranaghan from Castlefinn who passed away at the Donegal Hospice in March, 2016. She was 43. On Sunday, her husband, Kevin, and children Joshua (11) and Robyn (8) joined the masses as they remembered Lisa who was such a popular and highly respected member of the community.

“The McGranaghan family were delighted with the support shown to them and their family. It was a tough day for them. Hopefully it’s a day they will look back on with fond memories,” Grace said.

“We are thinking of making the Donegal Hospice the main beneficiary of the Run Donegal Women’s 5k every year from now on. Sundaywas definitely our biggest event yet. Given the numbers that took part at the weekend, trying to get 1,000 to the line next year is something we will definitely give some thought to for next year.

“The women of Donegal certainly stepped up this year, as did the community in the Finn Valley and Castlefinn areas. Boxer, Jason Quigley, was among some of the men who dressed up and took part and all that helped to create a buzz and a bit of banter.”

Donegal Sports Partnership Coordinator, Myles Sweeney, said he was delighted with the success of Sunday’s event.

“It’s great to see so many women getting out and getting involved. For some, this will have been their first time to take part in an organised race. We would urge them to keep active now and maybe look at targeting other events over the months ahead,” he said.

“The feel-good factor that walking and running gives was clear to be seen on Sunday, while there’s also a strong social element to it all. Great credit to Grace Boyle and Bridgeen Doherty for their efforts in getting everything organised and it was very much a team effort with many playing a part. This is a major event in the sporting calendar locally and long may that continue,” Myles added.

The race itself was won by Catriona Devine (nee McGranaghan) a sister-in-law of the late Lisa McGranaghan, in a time of of 19:04, with her Finn Valley club mate, Kay Byrne second in 20:38 and Sarah-Marie of Inishowen  AC third in 20:56.