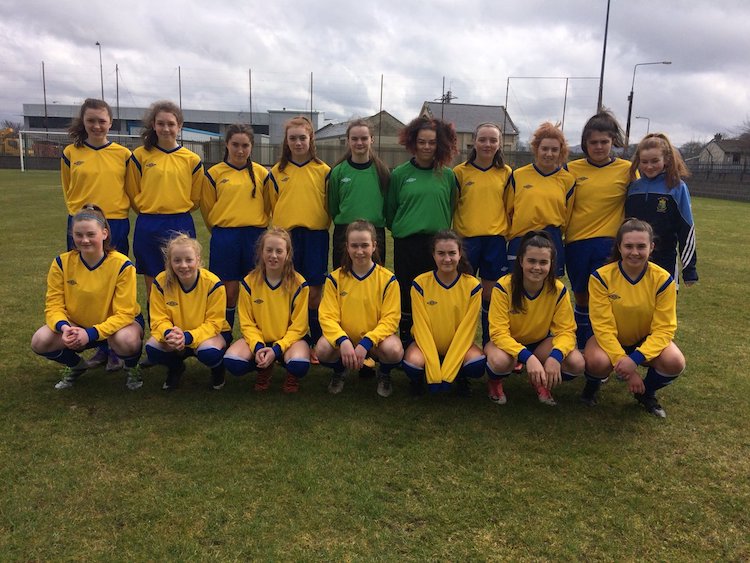 The Galway girls had two U15 Schools’ International starlets in the starting line-up with Captain Shauna Brennan and Kate Slevin applying their expertise for Cooney’s charges while Scoil Mhuire were hampered by the absence of striker Emma Doherty who was out of commission due to a broken leg.

The Connacht Champions made a positive start to proceedings as the talented Niamh Doherty was called into action for the Buncrana side early on. The netminder denied Alanah Fahy and Megan Wing in quick succession.

However the deadlock was broken on 23 minutes as Sara Cogley slotted past the diving Doherty to ensure an early advantage in a tense contest.

Cooney’s side went in at the break with that one goal cushion. Hone introduced Jemma Davies for McCarron at the break to refresh the attacking prowess of the Ulster stars.

But it was Claregalway who doubled their lead three minutes into the restart as Chellene Trill converted a brilliant individual effort.

The hat-trick of goals came courtesy of Elisha Bohan mid-way through the second half as Shauna Brennan played in an excellent ball from the left wing for Bohan to volley home.

Claregalway lost out to Moville Community College last month in the Junior Girls Cup showcase so the disappointment felt last time out was avenged with the Galway crew capturing the Minor title for their sterling endeavours to cap off a great season for the girls.

Both Scoil Mhuire and Claregalway College will compete in the First Year Girls Cup campaign shortly so we could see both teams progress again to the National stage later this month.