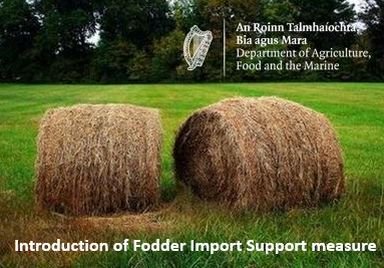 Over €1.5 million has been allocated towards the introduction of a Fodder Import Support measure, Fine Gael TD Joe McHugh has said.

The measure will operate through the dairy Co-operatives and will cover fodder imported by the co-ops from 5th April 2018 to 30th April 2018. Support under the measure will substantially alleviate the cost to farmers of imported fodder (approximately one third).

Mr McHugh, Government Chief Whip and Minister for the Irish language, Gaeltacht and the Islands, said: “This has been a long difficult winter and late spring that we are now emerging from, resulting in great pressures on the whole farming community.

“This scheme announced my Fine Gael colleague, the Minister for Agriculture Food and the Marine, Michael Creed, will support the importation of up to 20,000 tons of fodder into the country.

“The actual beneficiaries will be farmers who urgently need supplies of fodder.

“This initial allocation will continue until the 30th of April and is being operated through the co-operative structure and other approved importers. The scheme will be kept under ongoing review until the current crises is over.

“The Agriculture and Food sector is a strategic priority for Fine Gael. We recognise that farm families are the heartbeat of the rural economy and our vision for the sector will inspire the next generation to continue the tradition of family farming.”

“Application forms and terms and conditions will be made available through the Co-ops and on the Department’s website.

“Farmers should contact their local participating co-op indicating their intention to purchase and volume of fodder requested.

“The Department will pay the participating Co-op a standard contribution towards the cost of transport which in turn will be reflected in the ultimate price to the farmer. This transport contribution to the import cost will amount to approximately one third of the total cost of the fodder.

“A full list of participating Co-ops will be made available on the Department’s website, or from ICOS,” Fine Gael TD Joe McHugh said. Visit: www.agriculture.gov.ie/farmerschemespayments/fodderimportsupportmeasure2018/