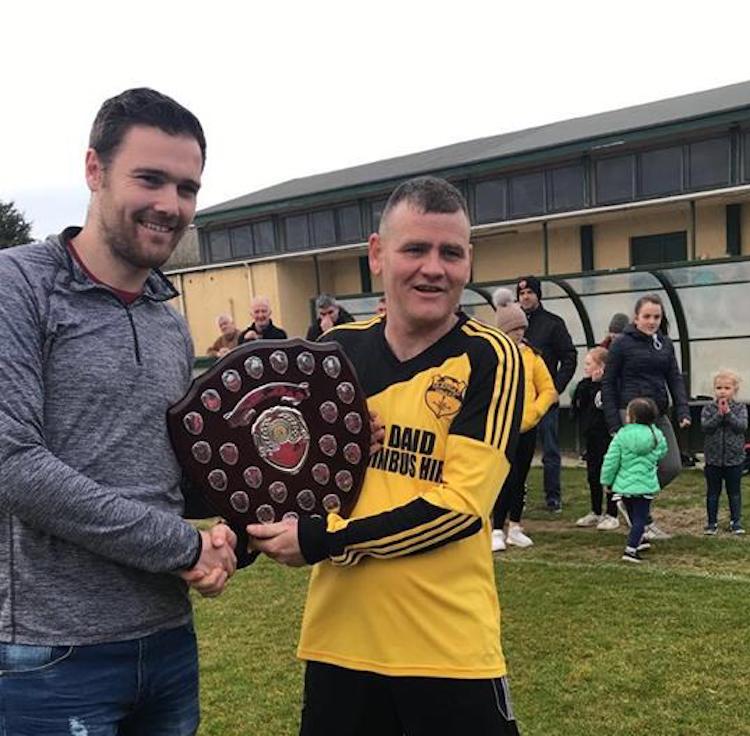 Glengad Reserves created their own little bit of history on Saturday evening when they lifted the Donegal Signs Reserve Shield for the first time after suffering two previous defeats in the final.

The foundation was laid in a very dominant opening half which saw them lead by three goals to nil. And although Carrowmena pushed hard in the second period the Crua men’s defence stood firm.

Glengad had all the early pressure with Mark Smith seeing a driven free kick gathered at the second attempt by Michael  Noone before Gary Kelly was off  target with two efforts from the edge of the area.

Carrowmena replied on 22 minutes when Darragh Kelly broke on the right and advanced into the area but his cross was deflected behind.

Carrowmena replied and Kelly’s dangerous cross was kicked clear by keeper Michael McLaughlin. On 31 minutes Glengad added a second goal after full back Mark McKinney advanced and poked the ball through to Gary Kelly and the big striker slid the ball low under the advancing Noone from 14 yards.

Carrowmena almost replied instantly after a free kick broke to Samuel Bredin but his effort was blocked by McKinney and the danger cleared.

On the stroke of half time Glengad virtually sealed  the win after McGonigle fed Gary Kelly who controlled and fired to the roof of the net from 20 yards for an excellent finish.

The same player had the first chance of the second half after McKinney had played a ball over the top but he blasted wide of the near post.

Minutes later Darragh Kelly broke into the area on the right and  his low effort was superbly tipped away by McLaughlin.

Glengad spurned the best chance of the second half when McKinney played a fine ball over the top to send Kelly racing into the area and while he managed to lift the ball over the advancing Noone it drifted just past the far post.

Carrowmena had most of the attacking play in the last 20 minutes with Kelly blazing over from the  edge of the area before Andrew Mclaughlin had a shot deflected behind.

Killian Dougal then volleyed their best chance over the bar after a corner was punched out to him before in the final action Dougal fired a free kick inches over the bar.

As usual there were plenty of contenders with Darragh Kelly and Michael Noone performing well for Carrowmena and Mark McKinney, Joe Doherty and  Paul McGonigle prominent for Glengad. But goals win games and the award goes to Gary Kelly who scored two excellent goals and was a constant threat to the Carrowmena defence all through.