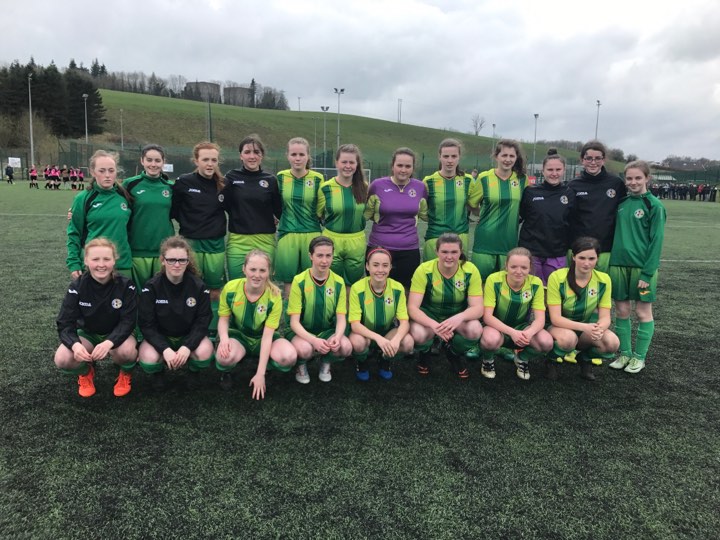 The first eleven spot kicks were all converted, but Donegal’s Helena McGee was the unfortunate woman who saw her kick turned over the crossbar by Tiffany Roberts, the MGL goalkeeper, for the match-winning moment.

Donegal had led from Bronagh Gallagher’s cracking goal in the 29th minute, but Kate Malone’s equaliser, in the first minute of the second half, energised MGL.

Ultimately, though, it went down to the 12 yard lottery of the penalties.

Eimear Sweeney, Gallagher, Catherine Grier, Siobhan Sweeney and captain Danielle McDevitt converted for Donegal, but the penalties by both teams were of a serious quality, although Donegal net-minder Clare Friel was unlucky on two occasions that the accuracy was so good.

In sudden death, Jessica Hennessey drilled home for MGL before Roberts denied McGee and the Dublin outfit were wheeling away to celebrate.

Donegal got the breakthrough they craved just before the half-hour. Grier’s delivery was perfect, but Gallagher still had work to do. Her connection was sweet and the finish even better as the Lagan Harps attacker beautifully found a spot in the far corner of Tiffany Roberts’ net.

But they were rocked back on their heels just 27 seconds into the second half as Emma Campbell evaded the Donegal rearguard. Campbell’s cross from the right channel was inch perfect for the unmarked Malone, who headed beyond Friel.

Donegal beat Cork in the semi-final, prevailing on penalties after McGee’s equaliser forced the game to extra time.

Donegal had the edge on a tepid first half, with McDevitt seeing her shot deflect wide from another dangerous corner by Grier.

Fiona Shovlin forced Roberts into a save and, down the other end, Zara Lawless almost caught Donegal napping, but shot over.

Jessica Darby drilled over the crossbar from a free kick as MGL began to probe.

After Malone’s leveller, Aoife Maher fired wide from 20 yards and the Dubliners were starting to dictate.

Taylor Massey almost sneaked it for MGL right at the end of normal time, but her ambitious shot flew over the top.

The participants were visibly tiring during extra time, but Suzanne Walker managed to get a shot away late in the day, but it crept narrowly wide.