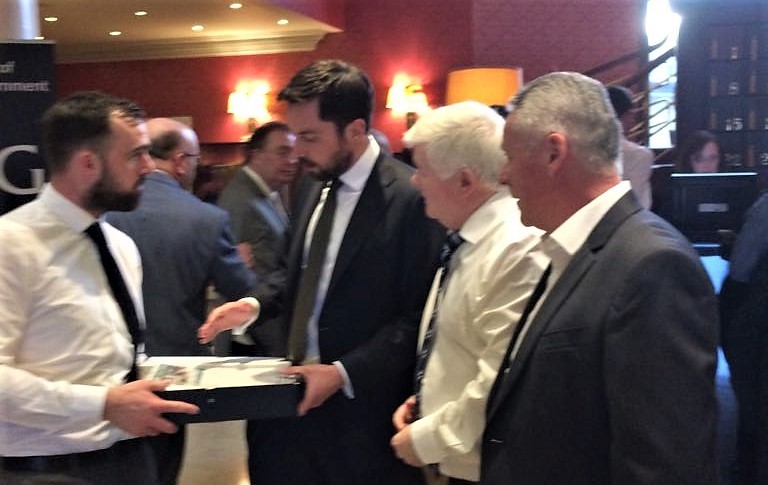 A petition from the people of Inishowen to save a much-loved amenity has been handed over to Minister for Housing, Planning and Local Government Eoghan Murphy.

The Petition to Save Swan Park gathered over 4000 names from locals who want to see necessary funding allocated to restore the area after it was destroyed in the August 2017 flooding.

Mayor of Inishowen Jack Murray, who set up the petition, met with Minister Eoghan Murphy on Friday evening in Co. Waterford. Cllr Murray, along with Cllr Nicholas Crossan and Paul Bradley took the opportunity to present the Minister with some 4000 signatures calling for the release of funding to restore Swan Park.

Cllr Murray said: “This petition was gathered in businesses throughout Inishowen, online and by local people gathering them within the community.
“I explained to the Minister, the sense of frustration in Buncrana as the government is not stepping in to restore this much loved amenity.
“The council has already commissioned a detailed assessment of the damage and have sent it to the department. To date however, no funding commitment has been forthcoming.
“Swan Park can not lie in ruin any longer. There can be no more delay. The government need to live up to the promises they made in the immediate aftermath of the flood eight months ago.”
4000 signatures from Swan Park petition presented to Minister Murphy was last modified: April 16th, 2018 by Rachel McLaughlin
Tags:
Cllr Jack MurrayInishowen Floodingminister eoghan murphySwan Park