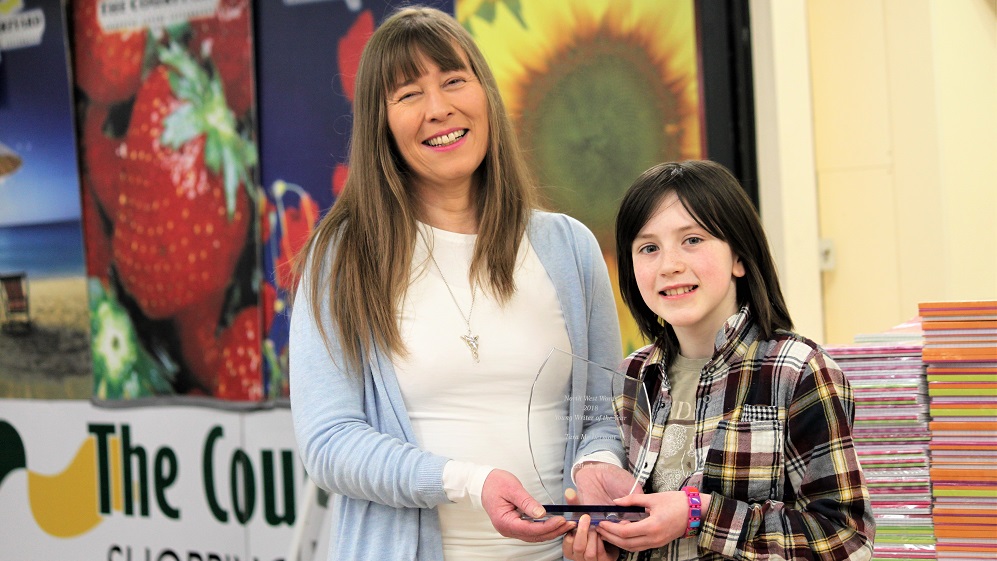 Tara McDermott was recently presented with the top trophy in the North West Words Young Writer of the Year 2018 competition.

The 11-year-old fifth class pupil at Stramore NS Glendowan won the overall prize with her creative work titled ‘Octavia’s Wish’. She was presented with the award from competition judge Deirdre Hines (pictured above). Tara’s school principal is Therese Mc Monagle, who is thrilled for her student winning this prize.

North West Words is a group that promotes the spoken and written word in the region by hosting monthly events with established and emerging writers, has an open mic for anyone to perform their work and has an online Arts magazine.

NWW volunteers launched the Young Writer of the Year competition with great success in January 2018. This year, there was hundreds of entries and they came from all across Donegal, Ireland, Northern Ireland, England and Africa.

Sponsored by Eason, the contest saw fantastic poetry and short story submissions from talented young people from across the North West. Both the poetry and prose could be based on any theme, giving these young writers a blank canvas for their imaginations to flourish.

Conor Mc Eniff from Macks ltd provided sponsorship and the trophy for the overall winner – The Young Writer of the Year.