Do you Park Smart? Gardaí appeal to motorists to lock up their cars

Gardaí have issued a nationwide appeal to motorists to park smart as new figures show that one-third of all vehicles broken into in residential areas had been left unlocked by the owner.

Figures from the Garda Analysis Service show that 8,571 vehicles parked at residential locations were broken into between 2015 and 2017. Of those, 2,824 were reported to be unlocked.

Over 200 cars in the Northern region of Ireland were said to be unlocked when the thefts occurred between 2015-17.

The analysis also shows that the most common location for these thefts was in driveways, and that half of the thefts occurred between 12midnight and 7am.

Gardaí are appealing for all vehicle owners to ensure they lock their vehicle no matter where it is parked. Do not store valuables in the car, but if you do have to, keep them out of sight.

On average, over €340,000 worth of property was stolen from vehicles each year. Property stolen included cash, laptops, tools, sunglasses, jewellery and sports equipment. 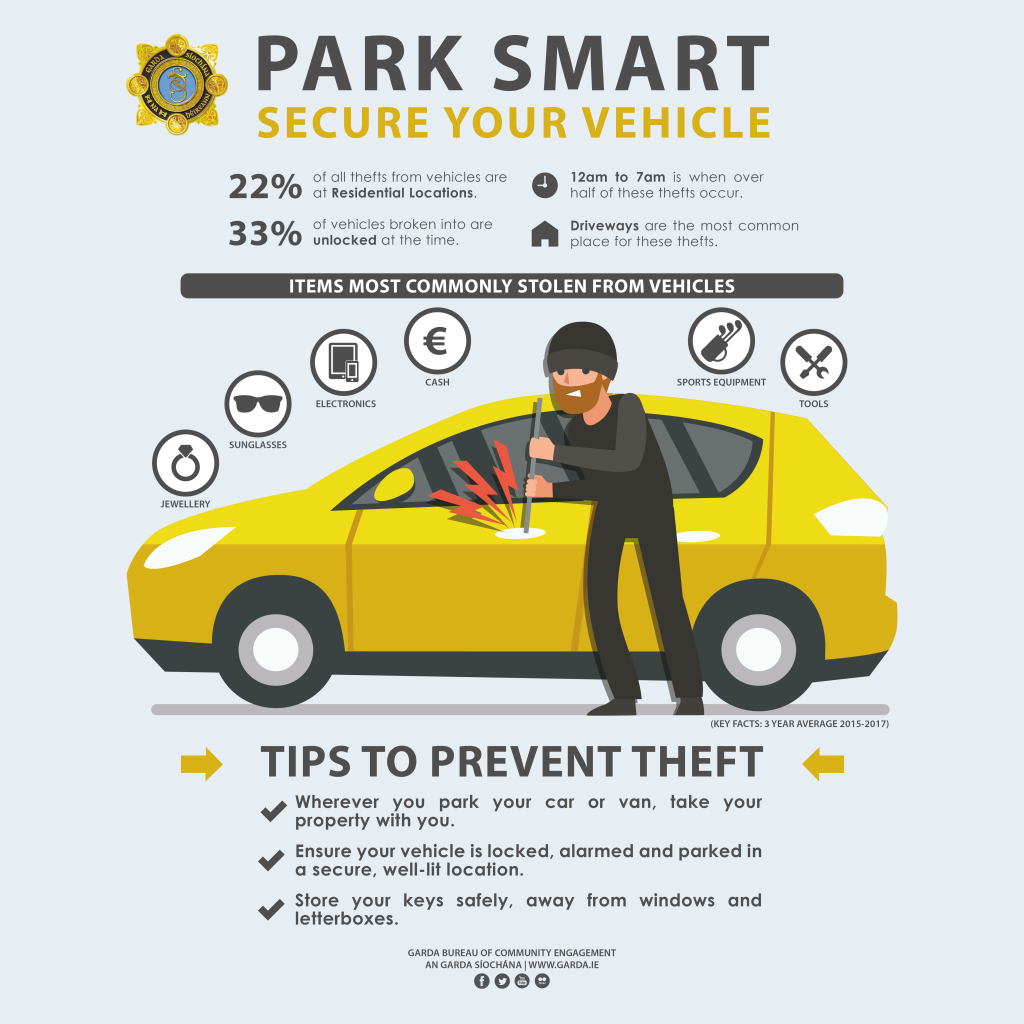 Sgt Kelvin Courtney from the Garda Crime Prevention National Centre of Excellence said, “Wherever you park your car or van, we would always advise you to take your property with you and ensure the vehicle is locked, alarmed and parked in a secure, well-lit location.

“Many of these thefts, particularly at residential locations, are avoidable with an average of 33% of vehicles being left unlocked in the last three years. Unfortunately, this poor practice has risen as 38% of vehicles were unlocked when they had property stolen from them in January 2018. We’ve even seen cases where two vehicles from the same household were unlocked and broken into.

“Sometimes it is impractical to remove tools and equipment from vehicles. In these cases, owners should take extra steps to ensure the safety of their property. Additional locking mechanisms to vehicles should be fitted.

“Consider a monitored vehicle alarm and tracking devices for valuable property. Reduce the payoff to the thief by marking and photographing the property and take a record of serial numbers, makes and models.  Download the household property register for free from the Garda Website for your records.”

Gardai are also warning people who collect cash from financial institutions/banks/ credit unions/ post offices to never leave the cash in their vehicles and leave the vehicle unattended as they deal with other business.

Do you Park Smart? Gardaí appeal to motorists to lock up their cars was last modified: April 17th, 2018 by Rachel McLaughlin
Tags:
car theftGardaipark smart