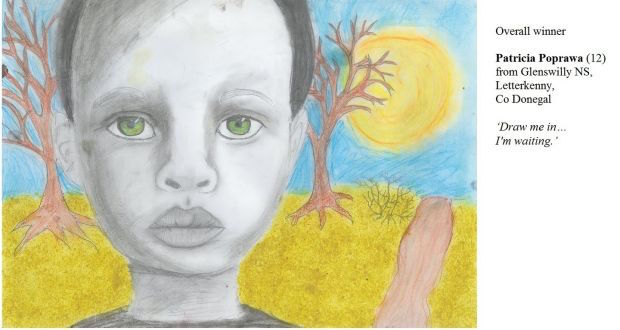 A painting titled ‘Draw me in . . . I’m waiting’, by a young Donegal schoolgirl has won the overall prize at this year’s Sightsavers Junior Painter Awards.

The theme for the 2018 edition was “Put Us In The Picture”, with 12-year-old Patricia Poprawa from Glenswilly National School picking up the main prize for her thought-provoking creation.

The winners of the competition, open to primary school children across the country, were unveiled this afternoon in The Science Gallery at Trinity College.

Ms Burke said “In the year that Ireland will ratify the UN Convention on the Rights of People with Disabilities, it was inspiring to see the appetite that children, teachers and communities have in exploring the nuanced conversation surrounding disability.

“I was incredibly impressed by the children’s pairing of artistry and intellect as they approached complex topics including identity, the social model of disability, allyship and othering.

“However, I was most moved and inspired by how their work was rooted in empathy and that even the youngest of entries were focused on constructive solutions to how we can make the world a fairer and equal place for all.”

The annual competition was devised by Sightsavers – a charity that works in developing countries to prevent blindness, restore sight and advocate for social inclusion and equal rights for people with disabilities.

Its aim was to inspire Irish children to express their artistic talent through painting, while developing an appreciation of the importance and value of their sight and the additional challenges facing those living with disabilities in developing countries.