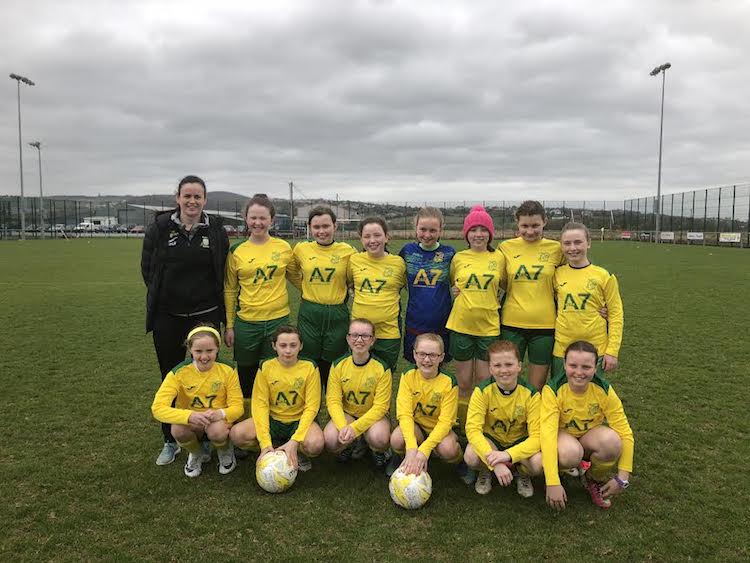 Bonagee under 12s (above) got their first win of the season with a good win over Swilly.

Both teams started well and didn’t take long to settle into the game.

On a windy night it was hard to control the ball. Swilly were first on the scoreline when a through ball found Susie Diver whose shot crept through the hands of Bonagee keeper Meghan Patterson.

Bonagee didn’t lie down and went on to score soon after wen a pass from Chloe Creevy found Grace Murphy who made no mistake with her shot.

Bonagee went in at the break 2-1 up thanks to Murphy and had a good bit of possession going into the second half. 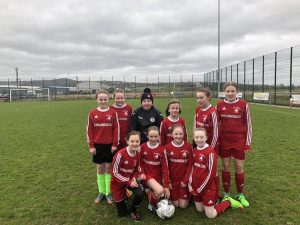 However, with Cailtin Doherty playing really well in centre mid for Swilly she got the ball down and played it through to Kirsten Stewart, who had a lot to do taking it past the Bonagee defence and slotting it into the corner of the net.

Bonagee didn’t stop there and went on to win the game, Grace Murphy going one on one with Aine Connelly in the Swilly net who made a fine saved and denied Murphy.

Murphy however got her deserved hat-trick wen she took it past the Swilly defence and placed it in the corner of the net.

Laura Callaghan was then played through with five minutes left on the clock and chipped the Swilly keeper to make it 4-2 to Bonagee.

A great competitive game from both teams.

Two goals apiece from Sarah Conaghan and Abbie McMenamin paved the way for a well-deserved win for Finn Valley over Raphoe Town at a windswept Deele College on Monday night.

A strong swirling wind made conditions difficult for the girls, but the visitors certainly managed better, playing much tidier football and finishing the game good value for their win.

They had the lead inside a minute, Abbie McMenamin turning in from a corner after uncertainty in the Raphoe defence and she doubled the Finn Valley lead by the 9th minute when a long-range free flew into the bottom corner.

Captain Ella McHugh was outstanding for Raphoe all night and almost halved the lead when she burst through, but her shot rolled an inch wide of the post and the visitors survived.

Samara McBrearty also had a half-chance as Raphoe battled in the windy conditions, but Valley had the wind at their backs in the first half and were in total control.

It was a different story in the second half as Raphoe pressed and pressed, but once again Valley’s quality shone through and with Sheila McElchar and Leah Lawne among many fine performers for the visitors they added a third when Sarah Conaghan raced through on the break to smash home.

At the other end, Valley goalkeeper Claire Diver was have an outstanding game and she saved brilliantly from Samara McBrearty and Ella McHugh as Raphoe piled on the pressure.

Eventually McBrearty found the net, turning in a clever shot to the bottom corner, but Valley responded brilliantly and Sarah Conaghan raced through on the break again to smash home a superb goal.

Raphoe fought back again, Ella McHugh finishing an excellent performance for Raphoe with a fantastic goal, but by that stage there were only a few minutes left on the clock and the visitors held on to take a well-deserved three points.

This game was played in very windy conditions which had a major impact for both teams. Amy Moore put Lagan ahead on 15 minutes after good work by Orlaith Doherty.

Mary Ann Ward pulled one back for Gweedore Utd with 5 minutes to go until half time.

Amy Doherty pulled of a good save from Marie Gallagher just before half time.

Sonia Gallagher for Lagan made a good run down middle before Sine Harris Ryan shot went wide of post.

Aine Ferry could have taken the lead shortly after restart but good defending by Shauna O’Donnell and support from Mia Devenney, making a good block on her shot, kept them, at bay.

Mary Anne Ward scored twice in the last few minutes for her hat-trick.

Aileen Sweeney nearly pulled one back of Lagan, with Aine Ní Fhearraigh finishing the scoring for Gweedore United.

llistrin and Kilmacreanan played a very good game of football on Monday night.

Illistrin, playing against a very strong breeze in the first half, started the better and had a good chance with Orla McCrossan combining with Sarah Robinson who in turn fed Sarah McGinley who shot narrowly wide.

Shortly after illistrin took the lead which in turn turned out to be the winning goal. When Sarah Mcginley played a lovely ball through to Leanne McGettigan, she burst through the Kilmacreanan defence and buried the ball into the bottom corner. Kilmacreanan had one very good opportunity but a good save from Alexandra Odonnell kept them at bay.

In the second half again illistrin piled on the pressure and some good play from Kate Malone, Eabha Daly and Ella Rose McDermott allowing Alicia Brady in on goal but the Kilmacreanan defence managed to get back in and cover.

Kate Malone and Hannah McGinley came in and done some magnificent work up and down the pitch keeping the pressure on Kilmac.

Kilmac had one very good opportunity at the end but some good last ditch defending from Darcey Kelly and Riona McFadden kept them out.

Donegal Women’s League – All the latest from Monday’s U12 action was last modified: April 18th, 2018 by Chris McNulty