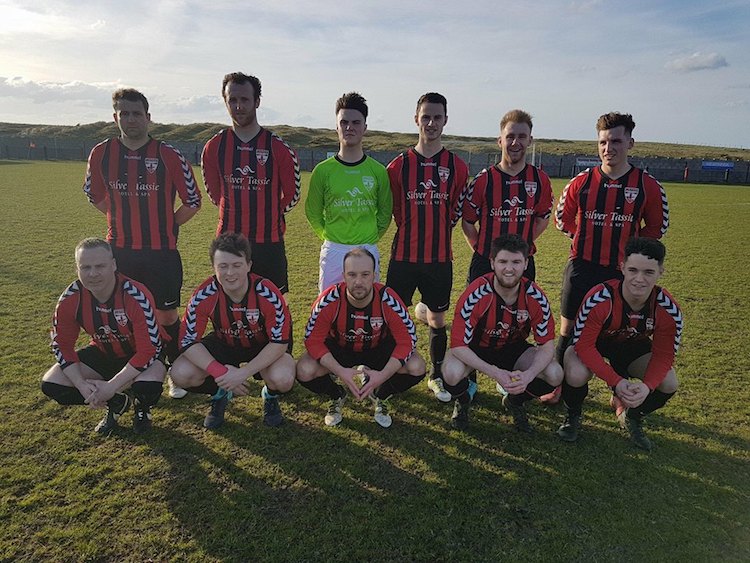 Fanad United closed the gap at the top of the Ulster Senior League to three points with a 2-1 victory over Finn Harps Reserves at Traigh-a-Loch on Wednesday evening.

If it wasn’t for an inspired performance by Harps net minder Joe Boyle this would have been a more comfortable win for Fanad.

Playing with the wind in the first half, Fanad had most of the chances.

The first chance of note came in the 15th minute when after a sustained period of pressure the ball fell to Keelan McElwaine at the edge of the box and his shot was well saved by Joe Boyle.

Fanad’s pressure finally paid off in the 21st minute when they broke the deadlock. A ball forward from mid-field was flicked on by Marty McAteer to Tony McNamee who controlled the ball before firing the ball into the bottom corner.

On the half hour mark Keelan McElwaine’s stinging shot from the edge of the box was deflected wide for a corner.

Fanad did extend their lead in the 35th minute when Marty McAteer headed on a ball to Daire McDaid who made no mistake.

McDaid almost got his second three minutes later but his shot produced a fine save from Joe Boyle.

On the stroke of half time Zak Brolly produced an excellent goal line clearance to deny Marty McAteer. 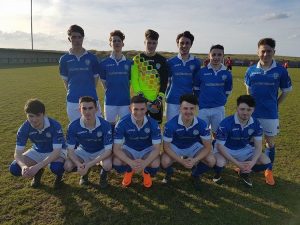 Ten minutes into the second half Zak Brolly broke forward from defence and found space in the box but his shot produced a decent save from Dane Dunworth.

Five minutes later Tony McNamee and Daire McDaid combined well up front only to see McDaid’s shot well saved by Boyle. From the resulting corner Shaun McElwaine rose highest in the box and his header seemed to be heading for the top corner only for Boyle to palm the ball away at full stretch.

Harps were starting to gain more possession and Zak Gorman seen a header from a corner saved by Dunworth.

Two minutes later Daniel Stolarczyk seen his rasping shot from outside the box hit the side netting.

With 20 minutes remaining Daire McDaid done well to create space in the box but his shot was blocked on the line by Paul Ferry.

Fanad were left furious 18 minutes from time when they appealed for a handball in the area, but referee Packie Coll dismissed their claims.

This came only minutes after Jordan Toland was taken down from behind in the box but them appeals were also turned away.

Joe Boyle again thwarted Fanad in the 75th minute when he produced a superb save with his feet to deny Daire McDaid.

Ten minutes from the end Boyle denied Tony McNamee with a decent save.

Harps did pull a goal back with four minutes remaining when sub Stephen Doherty’s curling shot from the edge of the area went into the top corner.

Harps then piled on the pressure in the remaining minutes but Fanad, marshalled well at the back by Shaun McElwaine and Oisin Langan, held out for a vital win.

Finnian O Donnell shot straight at keeper on 20 mins when in a good position.

Jack Malone was caught offside when in a good position for Derry on 40 minutes.

In the second half, Swilly started bright and Marty McDaid played a ball through for O’Donnel.

Shortly afterwards Sweeney put in a good ball only for McNamee to put wide.

After good build up the ball found the back of the net through McBride after a fine long range shot.

On 60 minutes Derry had another chance but went wide.

Shortly after some down play by Marty McDaid caused Derry some problems but Derry scrambled it away.

On 77 minutes Blaney, after some good work, got a shot off but was saved by the keeper. Derry had another chance right at the end with Jack Malone’s shot was collected by the keeper.

USL – Fanad narrow the gap at the top as Derry edge Swilly was last modified: April 18th, 2018 by Chris McNulty