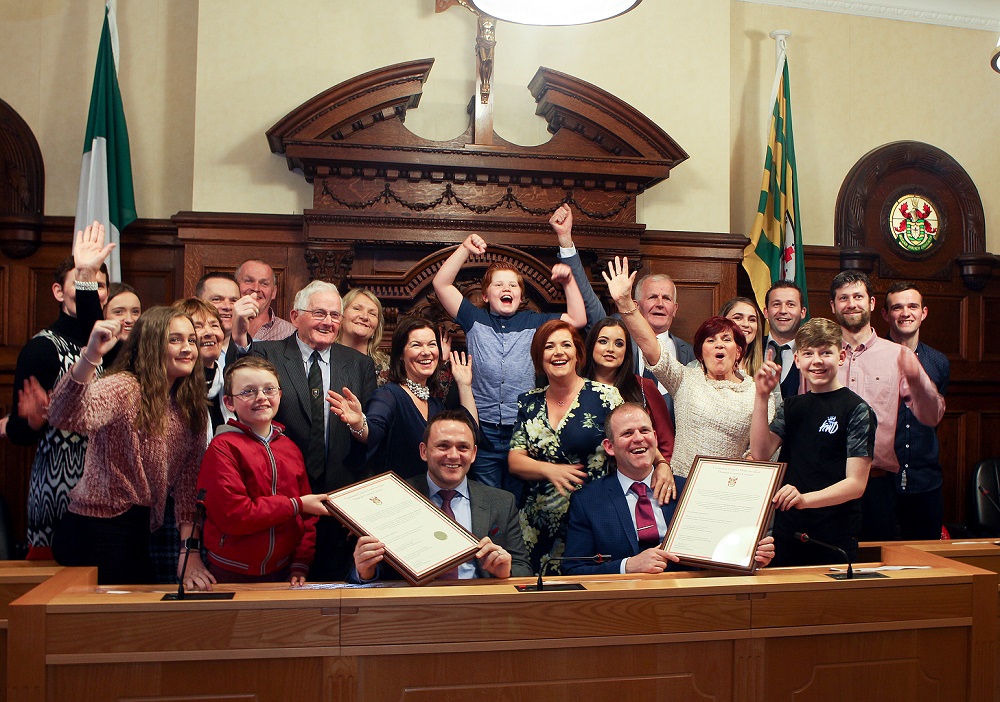 If you have the luck as a child to meet someone or something to inspire you in a positive way it can set your belief of what you can achieve. If you really put your mind to what starts in your mind as a dream it turns into an amazing achievement.

For Manus Kelly and Donal Barrett it was motorsport and the competitors that they watched as young fellows from the ditches in Donegal.

Everyone got a “wee spin”  in Mandy’s Subaru in Lifford on Monday evening as Manus Kelly and Donal Barrett made sure as perfect teammates they had everyone looking out through their rally helmets.  A rolling sub system was in operation as they tried their best to include everyone who helped and shuffled everyone into play up to the front benches for photos or flowers in the packed chamber.

The back to back winners of the Donegal International rally in 2016 and 2017 and national title holders in 2015  were invited into the best room in the house in Lifford as guests of honour in a civic reception courtesy of  Donegal Co Council. 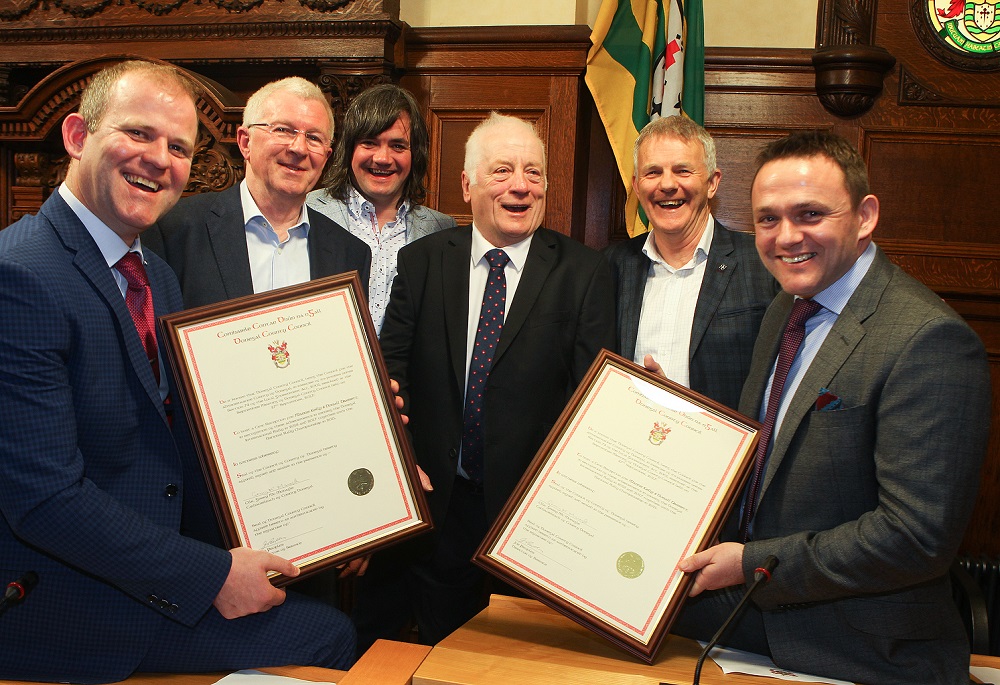 They talked about days before the left Donegal watching the rally every June as young lads never for one moment thinking they would ever come near to matching their heroes they idolised growing up. 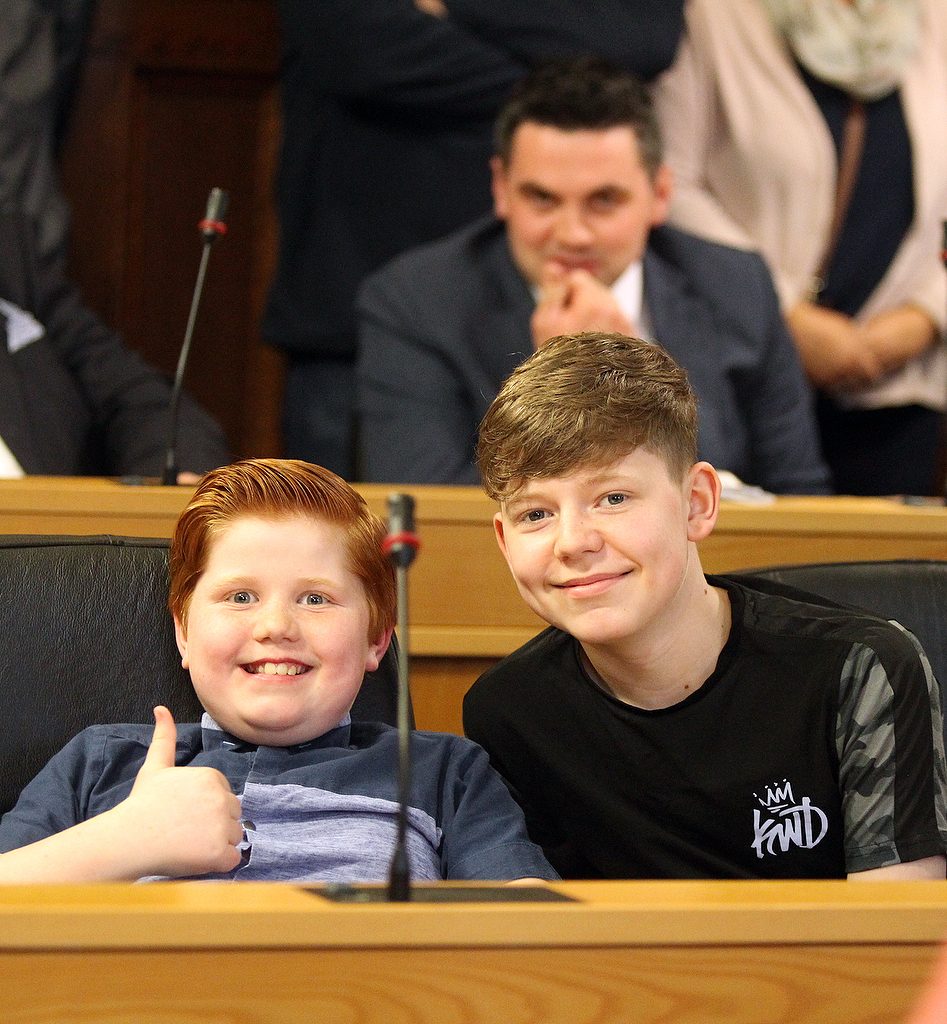 Charlie and Mandy Kelly sons of Manus Kelly pictured in the council chamber in Lifford with Cllr. James Pat McDaid in the background who made the nomination for the civic reception. Photo Brian McDaid

Donegal’s first citizen The Cathaoirleach of Donegal County Council, Sinn Féin Councillor Gerry McMonagle address the chamber as he welcomed and honoured the motorsport heroes and also thanked them for their endorsement and their ongoing help in promoting the council’s road safety programme.

Brian Brogan the Donegal Motor Club Chairman addressed the civic reception and like his fellow club members Manus and Donal, went on to mention all the competitors and organisers through the years that have made the  Donegal International Rally the blue ribbon event it has become since it started in the early seventies. 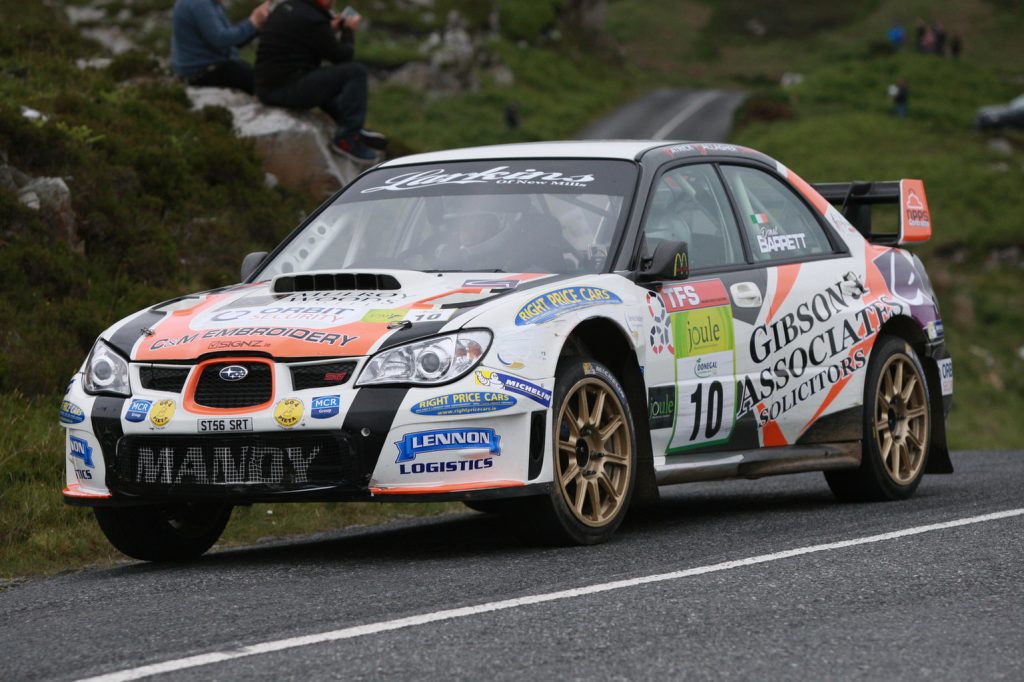 Manus Kelly was born in 1978. Ari Vatanen won the rally that year in a black Ford Escort Mk2. The event was only a hand  full of years old and before that  people like Donal Barrett’s fellow townsman  Milford’s Phonsie McElwee, who had a Cinema in Milford  when to Dublin to collect reels of film and also wore down a path to the Royal Irish Automobile Club with application after application from a new club that were dreaming of one day running a motoring event in their home county of Donegal. There’s nearly 50 years between Phonsie’s hopeful hand delivered letters to Dublin dreaming of one day putting our rally on the big screen and Donal and Manus in England dreaming of Doing the Donegal. 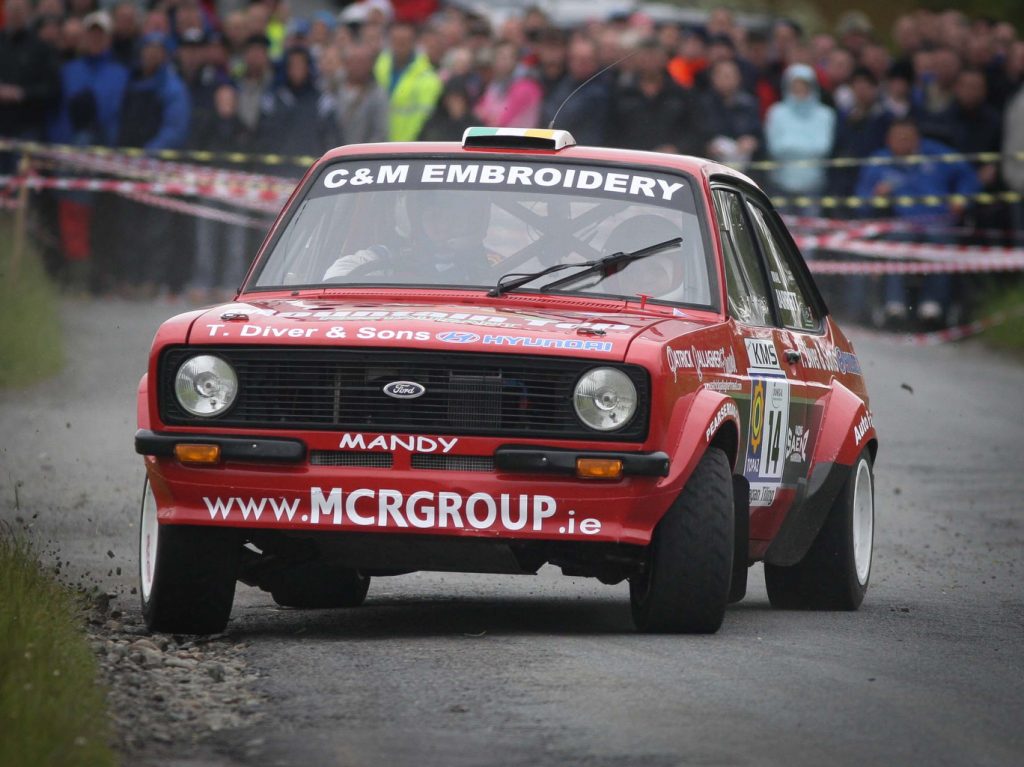 Manus Kelly in full flight in his Mk2 escort with Donal Barett on the notes on the Donegal Rally . photo Brian McDaid

Both have the same ingredient in their mix

They both had a positive belief in what they are doing. A photograph summed this up in 2016 in the Mulroy Woods Hotel in Milford at the celebration for Manus and Donal first international win. I watched the invited guests who were glued to the big screen as the film rolled through a projector sitting on a seat which was place high on a table, such was the crowd there that night. 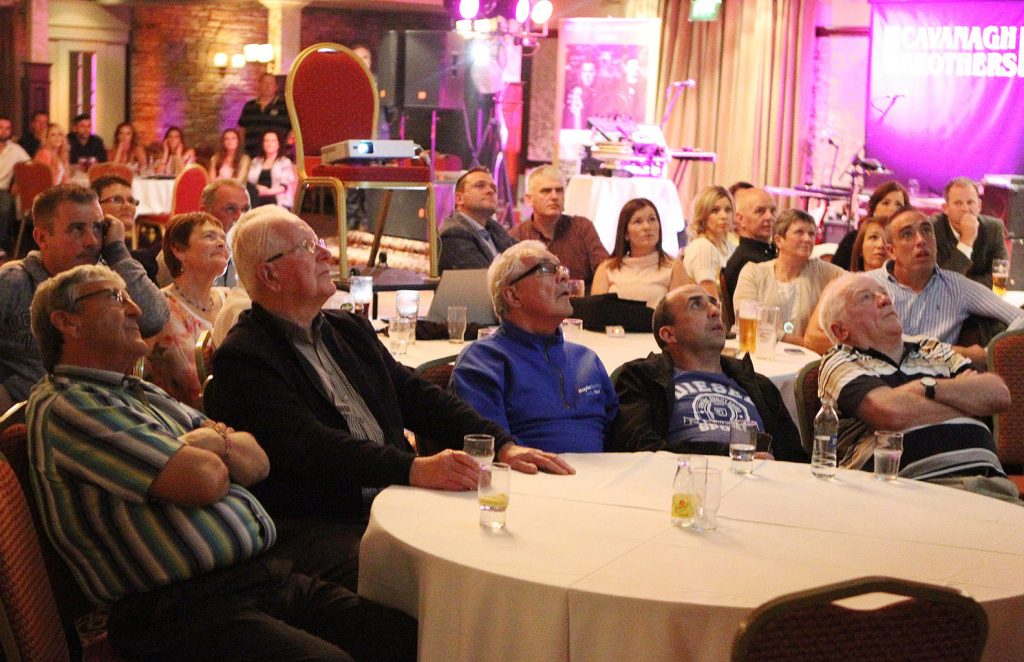 Donal Barrett and Manus Kelly sit in the background as the history makers watch footage of final stage of the 2016 Donegal rally in the Mulroy Woods Hotel , (formerly the Milford Inn) Seated from left, the first Donegal man to win the Donegal Rally, Vincent Bonnar, beside him The first secretary of the Donegal Motor Club and Founder Member of the the Club, Phonsie McElwee, The first ever winner of the Donegal Rally Cathal Curley , John Bonnar, Vincent’s Son at the the first Donegal Navigator to win the Rally Seamus Mc Gettigan. Photo Brian McDaid

It was the in-car footage from the final Fanad stage where 9 seconds were gained on one of the most challenging stages in Ireland. Watching in the background in the picture was Manus and Donall watching everyone else enjoying their success.

If I could be excused for nominating someone like Phonsie McElwee as ambassador to represent everyone that help organise the Donegal Rally to the success it has achieved, and also name someone like Seamus Doherty who has been a part of Manus Kelly’s team before it was called a team. Seamus and boys like him would have thought nothing of getting the first of Mandy’s rally cars transported to the rolling road at Galway university for testing when the first Millington engine was fitted. Seamus is just one of many that have worked in the background from day one to make Manus Kelly and Donald Barrett the successful local team it is. 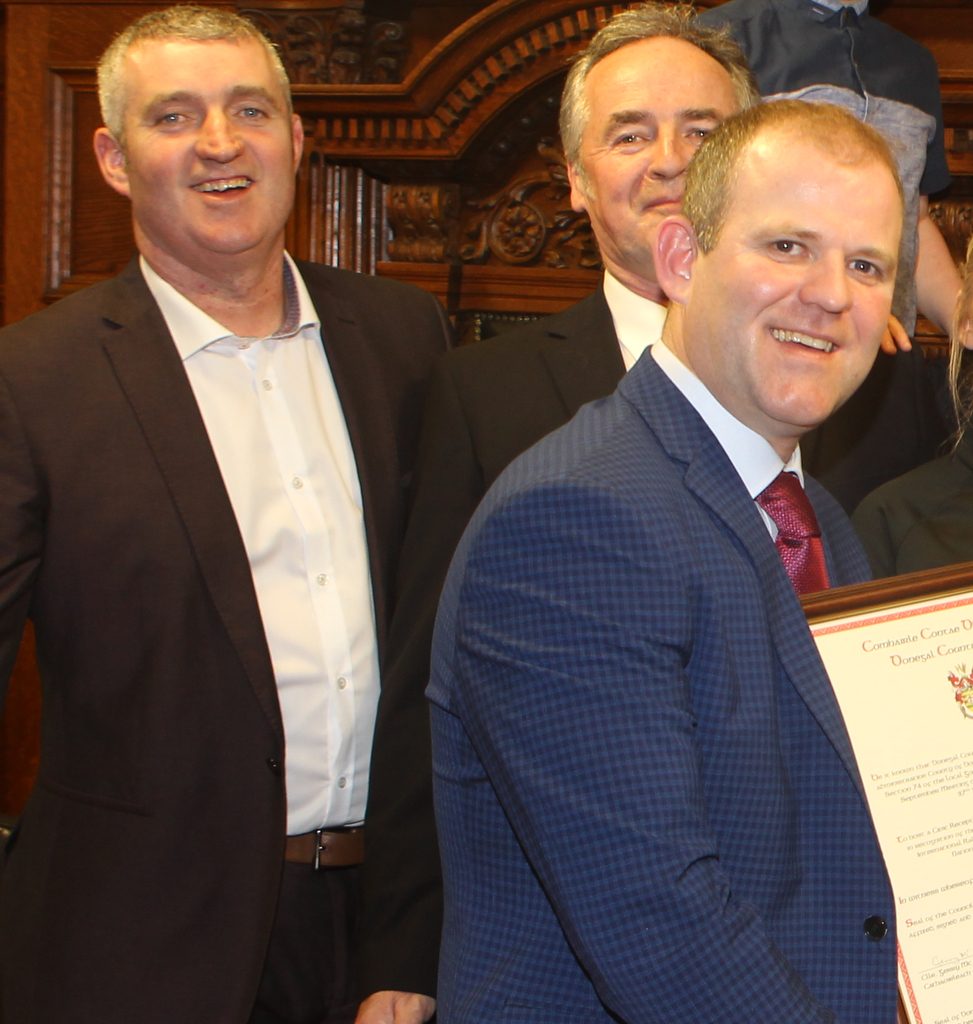 Seamus Doherty one of the men working in the background since the start with Manus Kelly in his rallying career. Photo Brian McDaid

As visiting competitors to  Donegal The late Ellen Morgan has to be up there for her contribution over the years to the Donegal International Rally. On Monday evening a perfect ending to a perfect civic reception was that of Manus Kelly inviting the only other Donegal born double winner of the Donegal Rally, James Cullen to take the stage where he made a special presentation to Donal Barrett on behalf  of his late navigator when he presented  The Ellen Morgan Memorial navigator’s trophy. 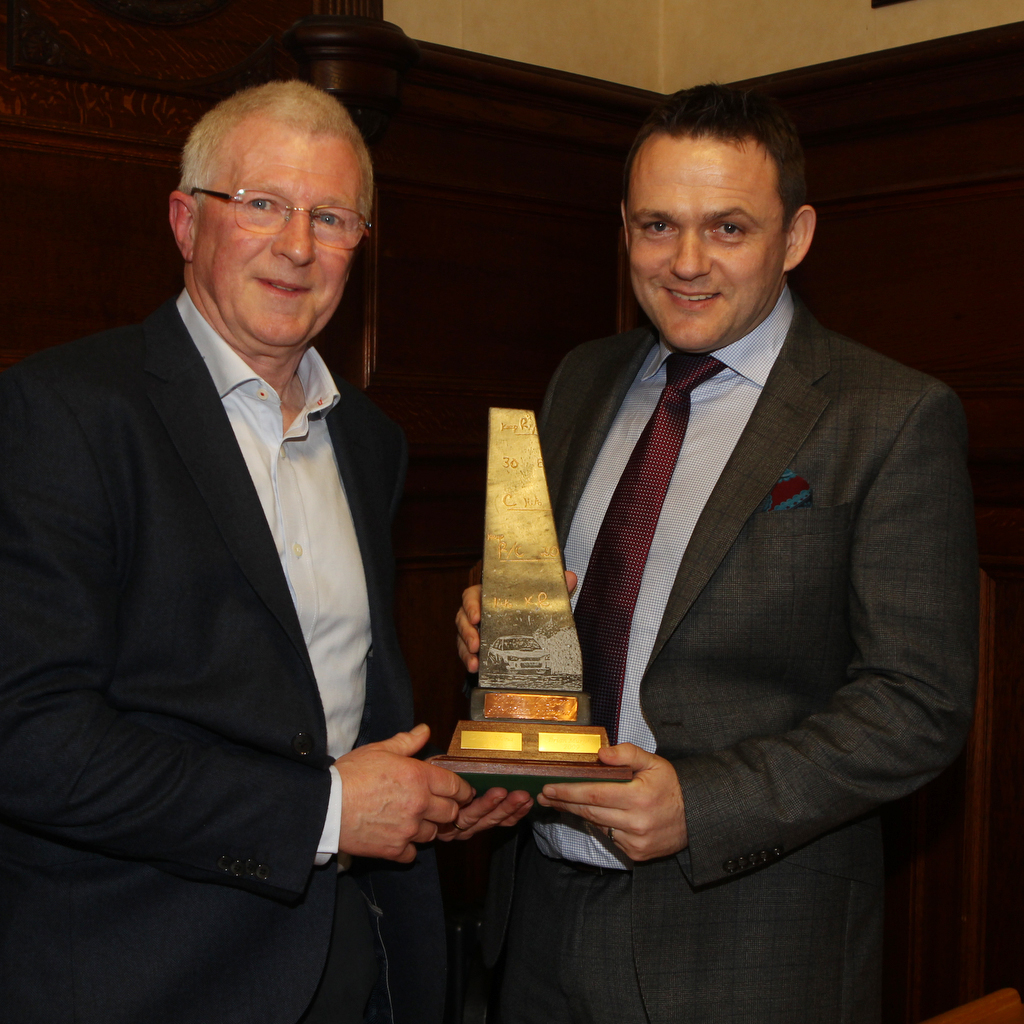 At the back of the chamber on Monday evening a guest stood at the doorway, his name, Dáire Nolan, Head of Commercial Fuels at Applegreen Ireland. He was invited to the celebration of the achievements of Manus Kelly and Donal Barrett success in motorsport so far. All going to plan he will come on board with all the local sponsors as a principal sponsor in the next chapter of this Donegal crew success story. It is hoped that the crew will compete in the Killarney rally before the Donegal International in June.