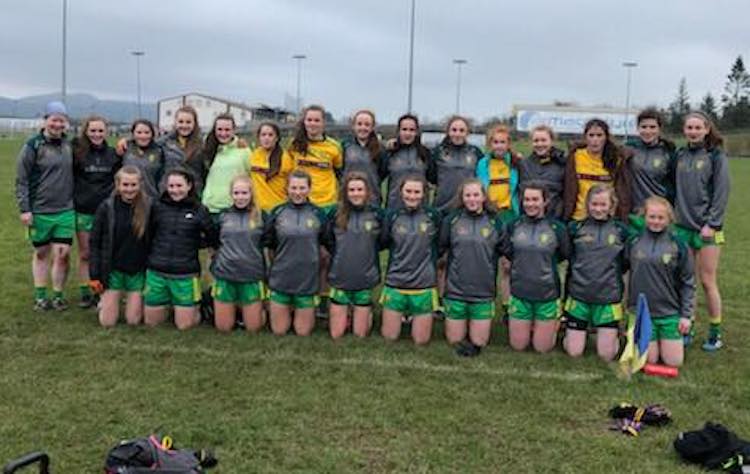 DONEGAL’S U16 girls host Tyrone at O’Donnell Park this Sunday in the Ulster Championship semi-final.

The county girls secured a home semi-final in the Provincial championship after topping their group.

The team defeated Armagh 3-07 to 2-02 in Silverbridge last Sunday to complete their group with maximum points with four wins from four.

Sunday’s opponents Tyrone finished runners-up to Cavan in the other Championship group.

Whatever happens at the St Eunan’s club this Sunday, the Donegal side are guaranteed an Ulster final spot on the weekend of May 12 or 13.

Win and they go into the Ulster A final. Lose to Tyrone and they will play in the B final.

Success so far has been built on a solid defence.

“The standard across U16s in Ulster is particularly high this year. We had really tough battles with Monaghan, Antrim and Armagh,” says manager Greg Harkin.

“Tyrone have a great side too so we are expecting another tough game on Sunday. These games are never easy.

“Our Donegal girls have been outstanding so far this year. They’ve had to dig deep when it was needed and have shown real character.

“We’ve done a lot of our training at St Eunan’s this year – the astro facility there is outstanding – so it’s brilliant to be back at O’Donnell Park again this Sunday in an Ulster semi-final.

“It would be great for the girls if as many people as possible get out to support them. I know some club U12 teams in the county are bringing their squads along to get behind the county team. The more, the better.”