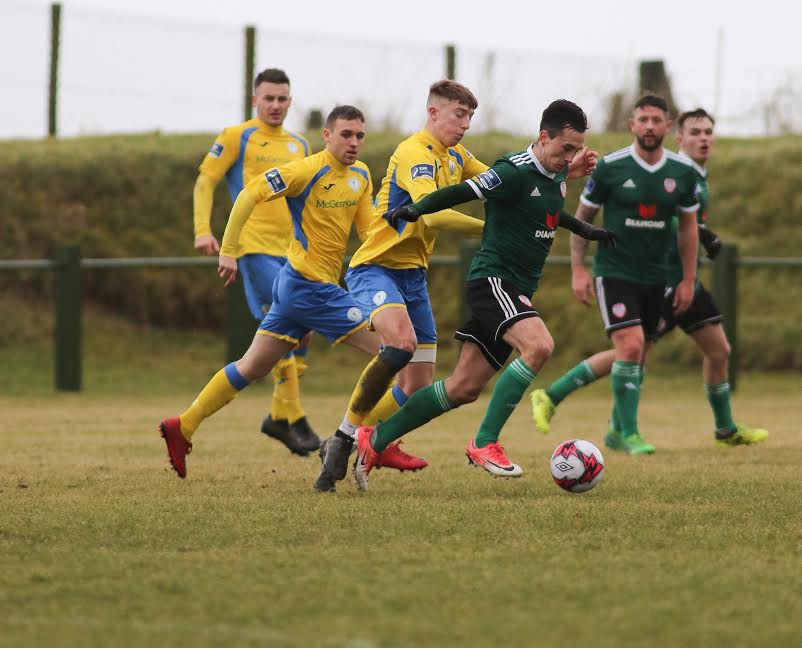 Todd strikes late as Finn Harps get back to winning ways

Sam Todd struck his second goal in as many games to scrape a win for Finn Harps against Cabinteely.

The big Carndonagh defender pounced six minutes from the end to fire Harps to win in a game they barely edged.

They had rarely threatened until that point, in the 84th minute when Todd struck gold, after BJ Banda prodded against Sean Hyland, the Cabinteely ‘keeper, at point-blank range from a Mark Timlin corner.

Todd, on loan until the summer from Derry City, has certainly stepped up to the plate in recent times and his goal gave Harps their first win in five games.

After a rather uneventful first half, Cabinteely went close twice in the opening five minutes of the second.

Dean Casey rattled the post with a swerving half volley as he seized on things when a ball across from the Harps left failed to pick out the intended target, Paddy McCourt. Casey’s effort had Ciaran Gallagher beaten, but the clink of the post and the sigh of relief almost went up in unison.

Soon after, Casey tried his luck again after dispossessing Mark Timlin on the edge of the box, but the midfielder flashed wide.

Harps had their first purposeful attempt 17 minutes from time when Timlin’s corner fell invitingly for Keith Cowan at the far post, but his stabbed effort was hacked from the goal-line.

Harps sent BJ Banda on to spice up their attack and the Letterkenny teenager had a golden opportunity in the 79th minute to put his side in front. Michael O’Connor put the chance onto the plate, but Banda’s spoonful fell on the floor as he shot wide with only Hyland to beat.

There was the rarity of an unchanged Harps line-up, something that hasn’t happened too often during Ollie Horgan’s reign.

McCourt, again, had been listed among those considered ‘doubtful’ pre-match, but the former Celtic ace was included from the off, with Gareth Harkin and Adam Duffy out of the reckoning because of injury.

Last weekend, a hat-trick by Donegal man Georgie Kelly condemned Harps to a 3-2 defeat at UCD.

Harps had claimed just one point from a possible nine since a 1-0 win over Wexford a month ago and their search for a win stretched to four games in all competitions, including an EA  Cup loss to Derry earlier this month.

The participants parted for the half-time refreshments after a dour first half in which neither keeper, Gallagher or Hyland tested.

The best Harps could muster was an ambitious Mark Coyle effort midway through the half, which floated over the top without calling Hyland into action.

Eight minutes before the break, Cabinteely fashioned the best move of the half when Karl Byrne’s centre was met by Eoin Stokes, but he turned wide from close range.

Cabinteely arrived in Ballybofey off the back of an impressive 2-0 win over Shelbourne seven nights ago and the Dubliners showed only a change of goalkeepers with Hyland coming in for Finn McGowan.

Hyland had largely a trouble-free night, but Harps began to turn the screw and, finally, Todd forced home to win the night and give Harps a badly-needed win.