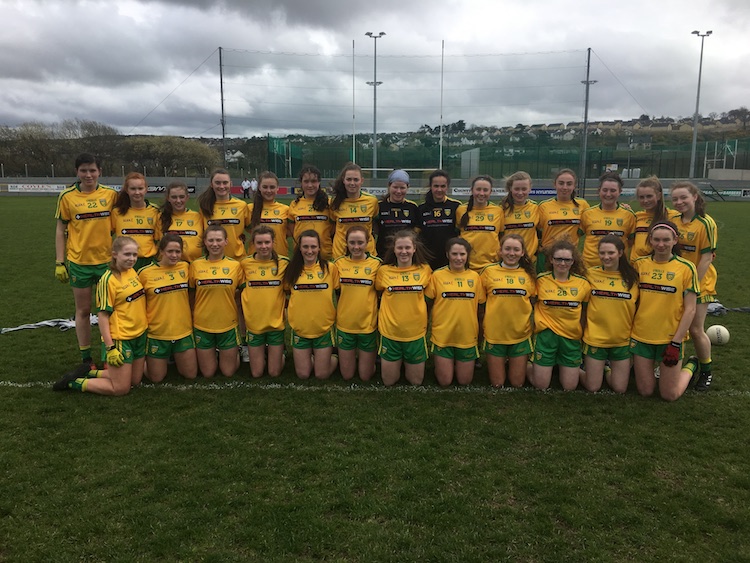 Donegal’s U16s are through to the Ulster A final after a nine point win over Tyrone at O’Donnell Park in Letterkenny today.

The Donegal girls put in an outstanding performance against a gritty Tyrone team.

The hosts took their scores when it counted with points from Niamh McDonald, Megan Havlin, Niamh Harkin, Katie Long, Laoise Ryan and Niamh Walsh to put the 0-07 to a point ahead with 20 minutes gone.

A superb goal from Megan Havlin sent the Donegal girls in at the break 1-09 to 2 points up.

Tyrone improved in the second half, inspired by their keeper who pulled off three incredible saves.

The Donegal defence, marshalled by the excellent Aisling McLaughlin, stopped a number of Tyrone attacks however.

At the other end Niamh Walsh, McDonald and Long pointed again.

Tyrone hit a goal with two minutes to go after a rebound from a superb stop from Donegal’s Bronagh Gallagher.

The Glenties keeper was injured in the incident and Tyrone sportingly conceded the game with two minutes left – Donegal won by 1-13 to 1-04.

Gallagher meanwhile was treated in hospital for her injury but was given the all-clear this evening and allowed home.

Armagh play Cavan next weekend with the winners taking on Donegal in the Ulster A final on May 12 or 13.