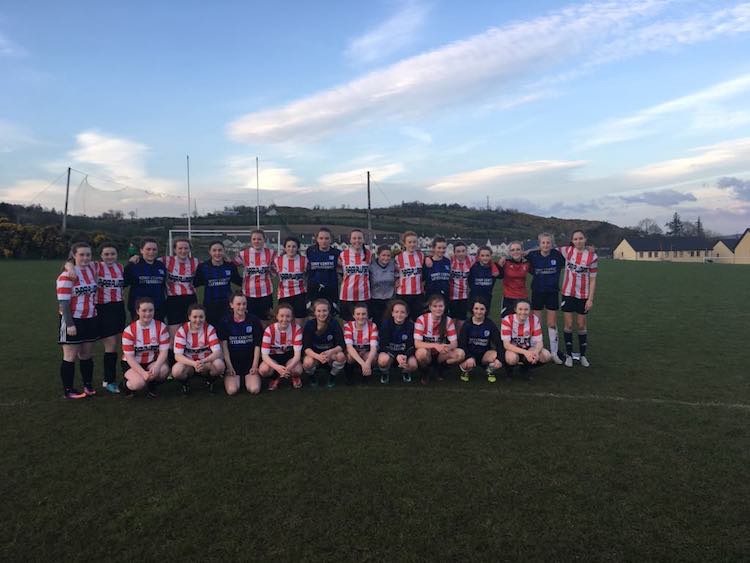 The goals keep flowing as the Donegal Women’s League action continues apace – here’s a round-up of the latest Under-16 and Under-14 games.

This game was played in blustery conditions, with the wind having a major impact for both teams.

Illistrin playing with the wind in first half pinned Lagan into defensive mood, Aislinn Coll dominated midfield and came close after 15 minutes with Neve Scanlan pulling off a good save. 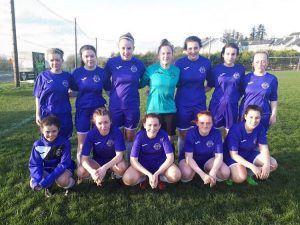 Meghan Walden nearly broke the deadlock from close range but Neve once again pulled off a good save.

Alisha Tobin and Maria Kealy had their chances to take the lead but Lagan cleared their lines.

Rebeka McGlinchey got on a through ball by Aibhe McDaid, but once again Lagan got In the block. Against the run of play and with 5 minutes to half time Lagan were awarded a corner which the Lucy Cannon delivering a excellent corner, and Rhianna Devenney fire home from close range.

Lagan got a grip on the game in the second half and began stringing passes together. A good combination between Holly Cannon a fine cross by Orla McGrath, was head just wide by Maria Boner. 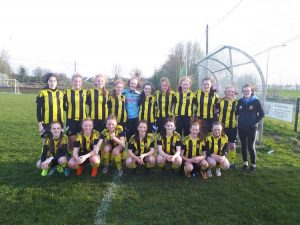 Erin Doherty hit a fine long range shot, which went in over head of Orla Corry. Orla was called into action again shortly after when Courtney Gallagher shot was well saved.

Meghan McDaid made a good run down right, before passing to Ciara Molly but she shot blocked by Clodagh Dweeney.

Swilly had to reverse their fixture to Raphoe. On a very windy evening Swilly started the stronger of the teams with Orlaith Connolly scoring in the 4th minute.

Raphoe settled and not long after  Shania McMonagle shot at the Swilly keeper and it was deflected into the Swilly goal.

Hannah O’Carroll for Swilly had a shot just over bar at 9 minutes and in the 11th Hannah had shot but Abbie McKnight pulled of a great save.

Chloe Moore scored a cracker on 22 minutes. Chloe great run up wing to score again  soon after. Alanna Kee’s shot came off Ellie to make the score 4-2 on 38 minutes.

Swilly took centre and with a lovely ball through from Aisling Irwin Chloe Moore scored to finish the first half off with a hat-trick leaving Swilly 4-2 up.

20 minutes into the secod half Lurana Hegarty was fouled and the free was hit narrowly wide by Aisling.

Raphoe never gave up and with five minutes to go were pushing hard for a goal but a great clearance off the line by Emily Irwin saved Swilly.

Both teams battled to the end in very windy conditions.

Kilmacrennan had the better of the game early on and had a number of chances that were stopped by the Finn Valley keeper, Caoimhe Brennan.

Kilmac broke the deadlock after 30 minutes and added two more in quick succession.

Finn Valley got one back just before the stroke of halftime.

Kilmac had the better of the second half and came out deserved winners.

This was a great showcase for the girls in Donegal Women’s league, with the ball moved from end to end and with Harriett McCrossan scoring twice for Lagan and Cody Walsh also twice for Raphoe.

Both teams defending well as these two girls were cause problems every time they got on ball, but Shania McGonagle and Rocha McCullagh were excellent in defence for Raphoe along with Lakeisha McCarron in goal. 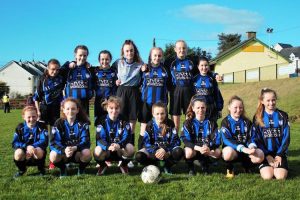 The battle of the game was in the middle between Erin Doherty and Lucy Cannon for Lagan and Cora McBride and Rebecca McColgan for Raphoe. A lot of the threats come down the wing with Emma Gribben and Gaby O’Donnell for Lagan but they couldn’t fine a way through with Abbie Lee Bell and Tammy Laird Quinn doing well for Raphoe. 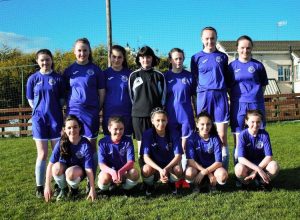 Ella McHugh for Raphoe was up against Lagan’s left back Niamh Sweeney, with both doing extremely well. Gabrielle O Donnell made a lot of good crosses with Kelsey Marshall defending well. Orla Doherty and A’alya Mustapha could have got the winner for Lagan but ball went marginally wide.

This game was played in ideal conditions on a glorious spring evening.  Both teams played excellent football but it was the hosts who came out on top with a comprehensive win.

Nicole McDaid and Maria Kealy both added goals as they finished neatly when put through on goal.

Darcey Kelly and Grace Nuggant defended very well for Illistrin while at the other end Leanne McGettigan and Sarah McGinley went close to adding to the score.  Katie Kelly for Gweedore United was defending very well.

Illistrin increased their lead at the start of the second half with well taken goals by Erika Gallagher and Ciara Molloy.

The impressive Jodie McFadden finished well for Illistrin before Aoibhin Randles finished off the scoring in fine style.

Kilmacrennan deservedly went ahead in the first half with a penalty score by Grace Doherty. However, with about three minutes to go Bonagee equalised through Hannah Hopkins.

Neck and neck at half time and it was all to play for.

Bonagee started the second half stronger and scored early to to go 2-1 Grace Murphy with the goal.

It was a tight game with chances at both ends. Kilmac ran out of steam when Bonagee netted a third through Hannah Hopkins again.

Finn Valley were hosts to Swilly Rovers on a fabulous April evening. The game was very tightly contested throughout. Both keepers were tested in the first half with the young Valley side having the better first half chances.

Early in the second half Swilly capitalised as Mae McCarron found the ball on the edge of the box and calmly slotted it passed Valleys keeper, Aibhe McMenamin.

Swilly maintained possession for much of the second half with further chances. In the last five minutes of the game Valley found some momentum with chances from Aimee Lafferty and Hannah Gallagher, but were unlucky to not find the back of the net.

Both teams contributed to a very entertaining game which finished 1-0.

Mulroy were not long getting on the scoreboard when a early ball crossed by Maire Kerr to the nimble Jessica Coll who finished it superbly.

Gweedore battled well but just were not able to get a break. Iseult Ni Mhathuna showing great skill on the ball  got the second goal for Mulroy.

Jessica Coll put away a lovely cross by Caitlin Heraghty to seal a third for Mulroy.

The Gweedore Keeper Mary Kate had a exceptional game and saved almost everything that came her way.

Jessica Coll sharp as usual ended her night with a well deserved hat trick. Aoife Sweeney and Kelley Carr had great game in the defence line.

Donegal Women’s League – all the action from latest games in U16 and U14 Leagues was last modified: April 22nd, 2018 by Chris McNulty