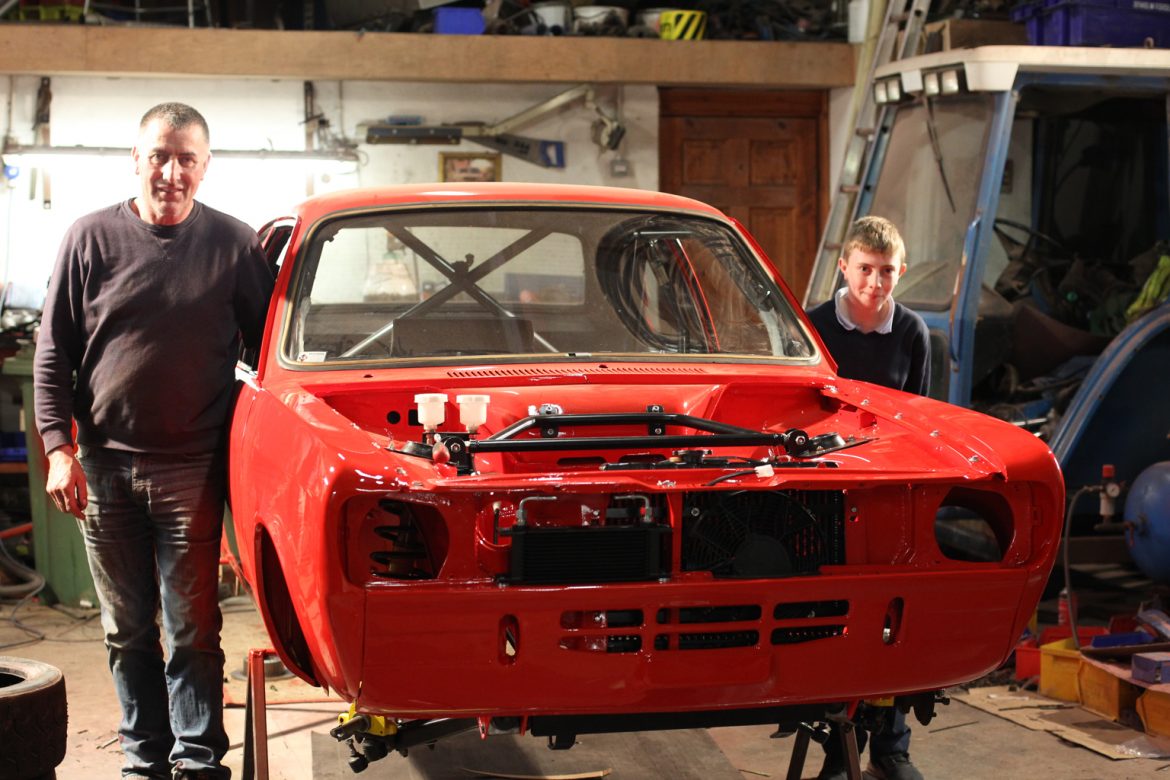 “Wardance Red” was the colour of choice when the  top notch Tiger Avenger hit the hills in the seventies, now Glenswilly’s  Brian Devine is creating a very classy looking iconic Avenger for the historic section on the Donegal International Rally

For a historic fan like myself it was a sight to behold walking into a garage workshop up Glenswilly and seeing the shell of a two door Avenger sitting high on stands coming to life once again.

With a bit of luck, Brian Devine will get an entry in the historic section. It’s twenty years since Brian drove in a rally at national level but this is the first time ever he will be hoping to do the Donegal International Rally.

Brian has built his car from scratch a red two-door Hillman Avenger, which has just been resprayed in an amazing red. 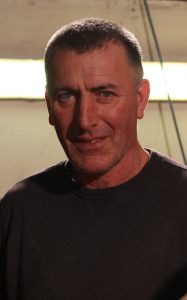 Brian Devine getting ready for the Donegal for the first time as a competitor with a classic Avenger which he built himself. which he will run in the historic section. Photo Brian McDaid 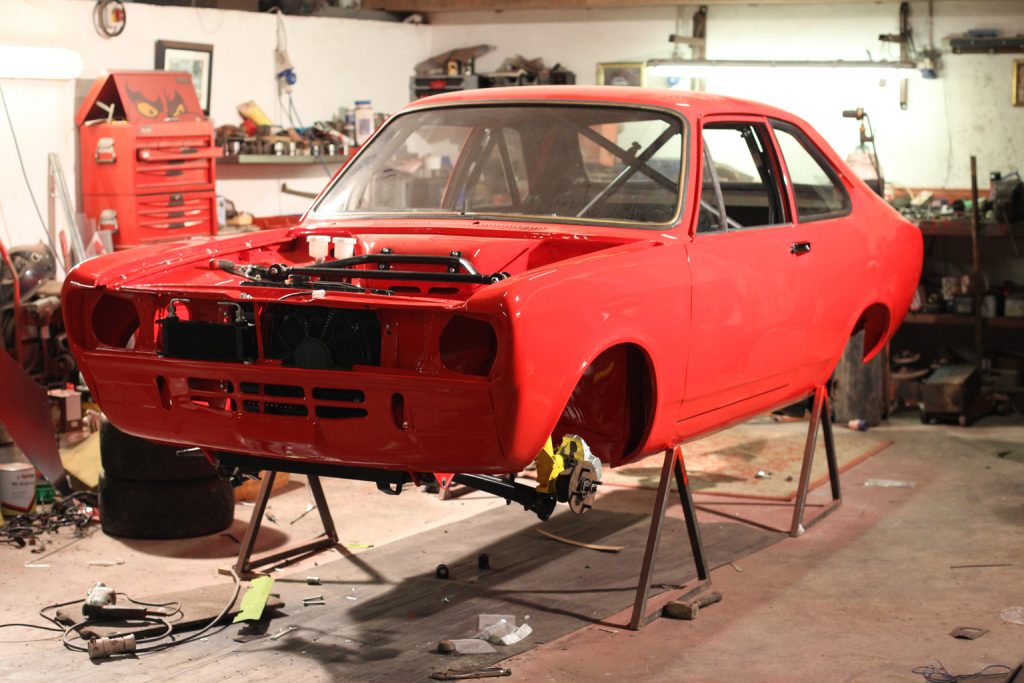 In 1972 For £1,350 you could buy one of only four hundred made Mk2 Tiger Avengers available in War dance red or Sundance Yellow. Surprisingly it’s was faster than the Ford Escort Mk1 Mexico back in the day. That’s the historic specifications  including twin weber carbs and uprated suspension and brakes gearbox first fitted to the  Avenger 1500 GT which was what the old group ones  where homologated  to when the were first rallied back in the early 70’s and nearly 50 years on that’s the strict spec that Devine will build his historic car to. 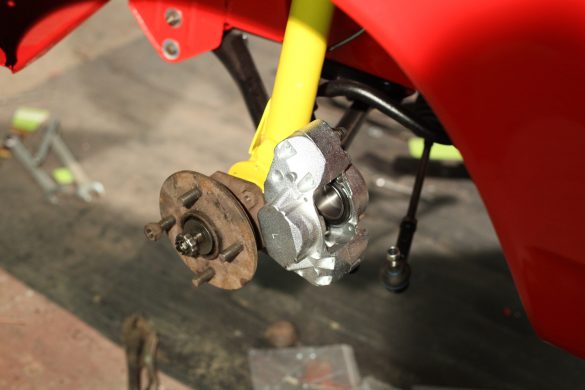 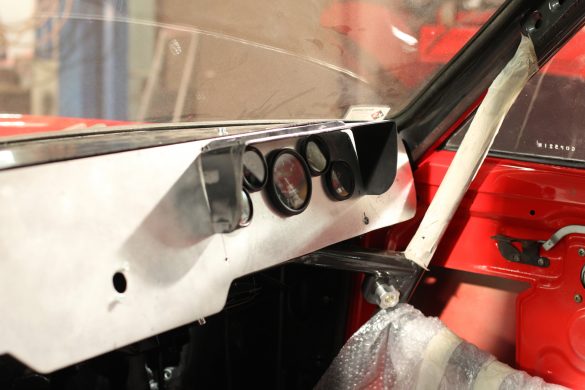 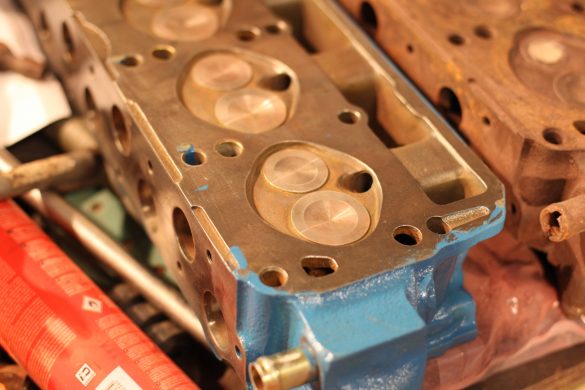 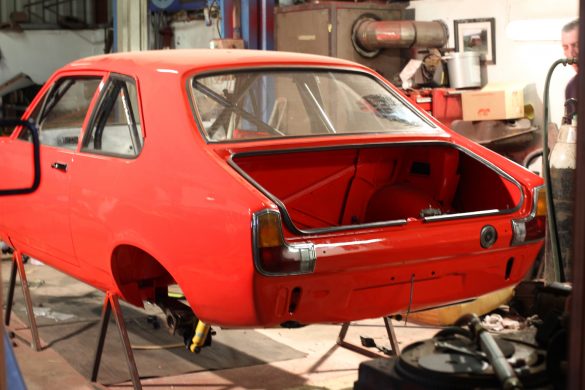 There was nothing perfect about a Hillman or Chrysler Avenger in the seventies, their gearboxes were soft, they would jump out of second gear and you would have to hold the gearstick in second if you were powering the car on (which I never did).

The clutch cable would pull through the bulk head and a pair of vice grips were used on the outer cable, to get the clutch operating again. The drum brakes on the early ones were crap if you went through a puddle of water and the headlights would pop out going over big bumps and big jubilee clips were opened out to fix them back into place. That was the impression I had when we were able to afford them and by that time they were well through the mill.

Other than that they were an amazing car to have growing up years ago, the first car I drove was my father’s series 6 yellow four door complete with a black Vinyl roof and the spotlights were wired directly into the headlights which in turn burnt out the dip switch. Think that electrical mistake would work on any car.

My first car that I owned was a series 7 Avenger which was originally gold and I got resprayed in a brilliant red, finished off with the “must have” black Dunlop Wheels. For all their faults they were iconic in Donegal because they were the car of choice of the great Rally drivers of the day, big D , John Joe Boyce, Eamon Harvey , James Cullen, just to name a few made family cars iconic when the were built into rally cars to take on the best of the rest when they arrived in Donegal for the rally. 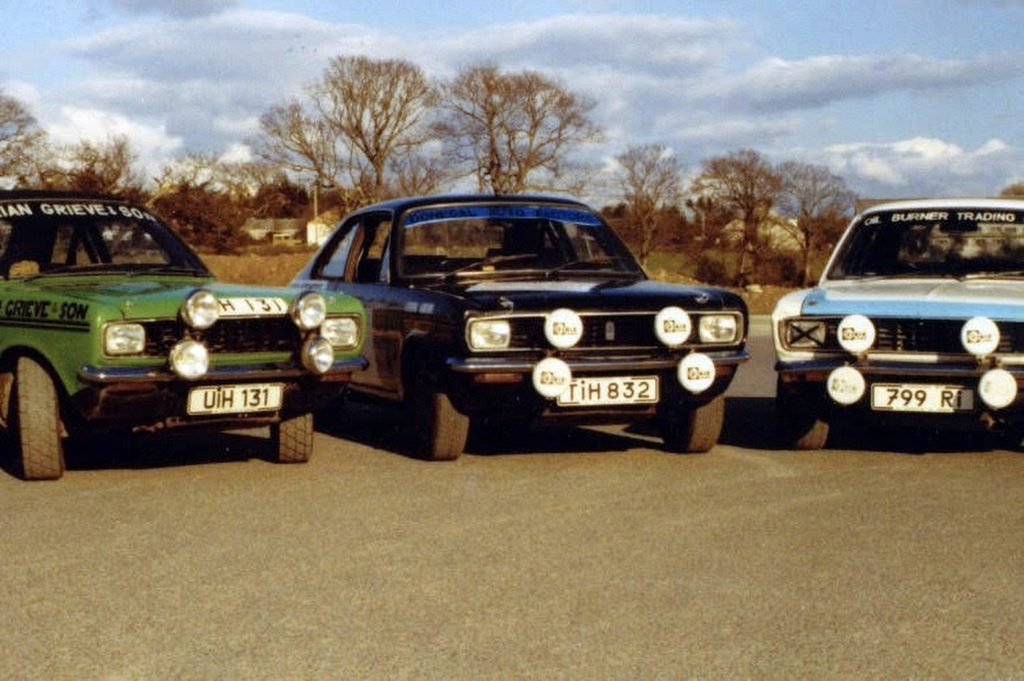 It took nearly a decade for Devine to get this Avenger to where it is today he has been gathering Avengers for years and has built up enough competition parts to build maybe two rally cars.

He knows where every part has come from and has a story to how he came about finding them as names of big avenger men back in the day echo through the workshop as Devine tells the story of journey so far.

Even parts like the high ratio steering rack that fitted to this Avenger was from the stock of competition parts that the late and great rallyman Clifford Agnew stocked in his motorsport supply business.

Devine has even called up his old navigator Tony Mc Hugh who sat on national one day events nearly 20 years ago in a yellow Twin Cam Corolla. Tony is up for the challenge and has his pencils sharpened and the rally suits out of storage as they prepare to light up the stages and bring back memories to a lot of us with of Avenger fans on this years Donegal International Rally.

This is a one off even down to the registration plate it will run under will remind a lot of the days of the six sharing a plate of chips in the Dolphin Cafe and running around Letterkenny and parking up outside the newly opened Four Lanterns in Letterkenny , of milkshakes of chips with no vinegar of old CB radios and big aerials and the power mic, CB handles like Snowman and The Bandit will come to mind when this car will run on an old Letterkenny registration from that era. 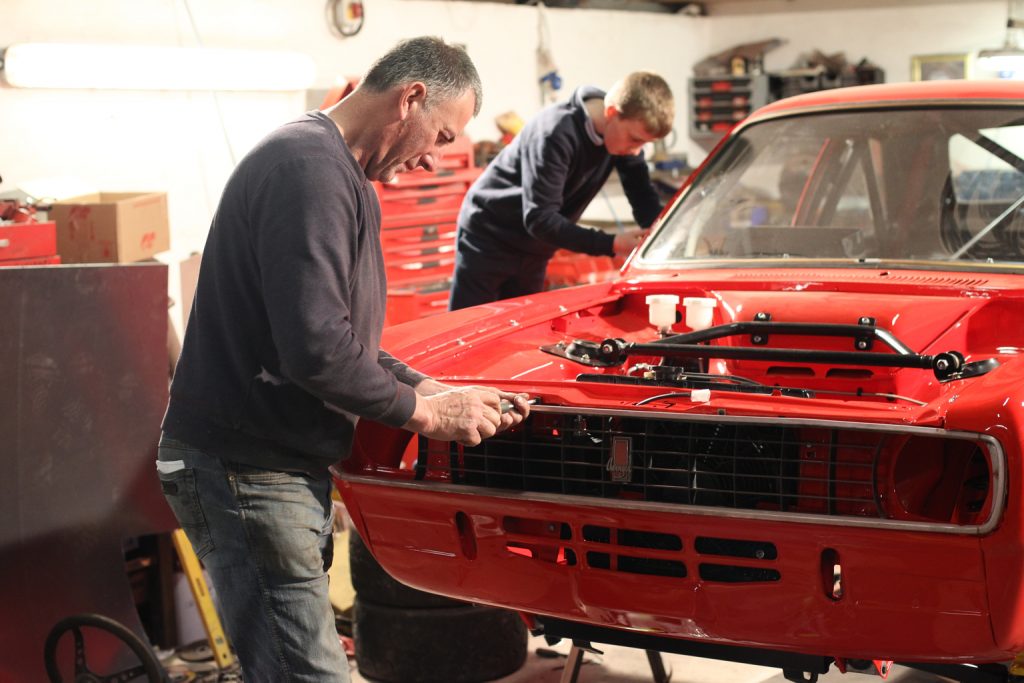 Brian Devine at work on his Avenger with his son William giving him a hand at his workshop in Glenswilly. Photo Brian McDaid

Brian Devine services for his fellow Glenswilly man, Damien Gallagher normally who is the current National Tarmac  Champion, Damien will not be getting an opportunity to defend his title because of a ban that includes the Donegal Rally. Brian also services for Philip Case Rallying which has taking Brian to rallies in main land Europe to work on the ever growing stable of cars serviced and maintained  by Philip Case who is based in Letterkenny. Brian took the decision to announce that he would get his Avenger finally built this year and do the Donegal. As we go to press this week that car is well sorted the 1600cc engine is just about to be built and in general all things coming together beautifully.

And finally … what a Cool-boy

On a final note I have included a small clip  and a photo of Toys Sumbeam from the Monaghan stage rally last weekend of Roy Baldrick and Dermott Friel in their Sumbeam which is also from the Avenger era. 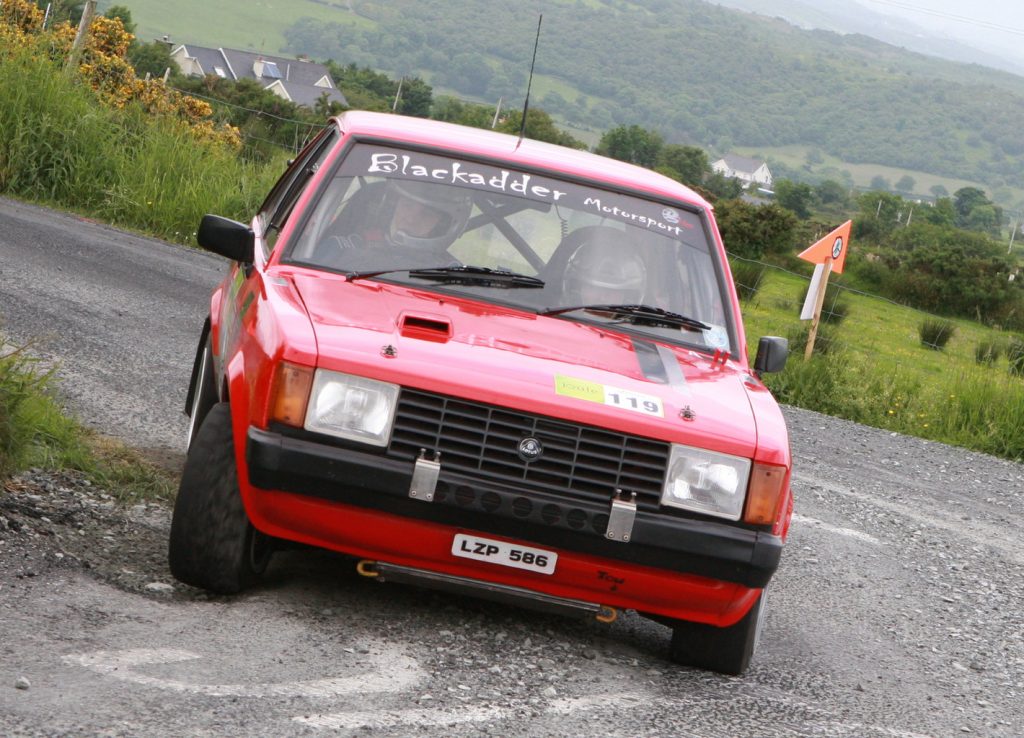 Roy Baldrick in action in his Sunbeam on a recent Donegal Rally the same car which he had a great spin on in last weekends Monaghan Rally. Photo Brian McDaid

The Sunbeam step sideways after landing following a set of double bumps and the in-car footage show Roy going from opposite lock to opposite lock in an attempt to keep the car from hitting the ditches. The sunbeam went completely sideways before spinning 360 degrees the opposite way on the narrow road missing all the ditches before pointing the right way as Roy quickly went down from 4th gear to 1st and lost hardly no time and continued down the stage.

Roy Baldrick is a Letterkenny man who rallied Sumbeam Ti’s years ago and got back into them in recent years in the modified era. Roy now lives in the townland of Coolboy outside Letterkenny which I think suits his calmness perfectly in his actions in this great rallying clip of him in Monaghan with Dermott Friel  at the weekend.