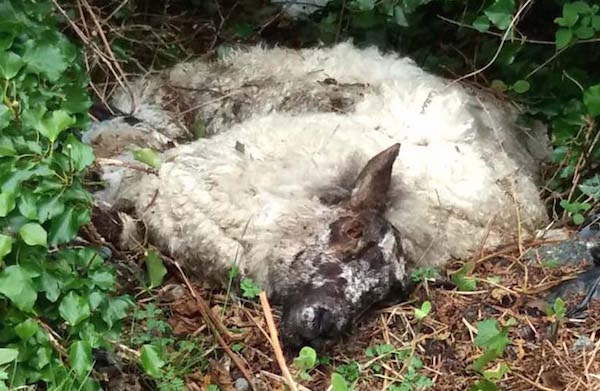 Members of the community involved in the Fanad Clean Up Day have expressed their horror and disgust at finding a number of dead animals along a number of roads.

In all nine animals were discovered including five calves, three ewes and a dog.

Adding to the shock was that a number of children were involved at a particularly obnoxious site where recently dumped sheep carcasses and some of the rotting calves were discovered.

On Tuesday the Council veterinary and road services along with an independent operator removed three sheep and two calves from very difficult terrain close to Mulroy Bay at Tullynadall.

Martin Roarty, the Letterkenny area Litter Warden who supervised the operation said it was the most sickening experience of his time as a litter warden. He also confirmed that two mature calves had mysteriously disappeared from the site over the weekend.

Mr. Roarty told the Tirconail Tribune that the dead calves had been dumped 25 feet off the roadside on steep and treacherous incline.

However the undergrowth and trees could not conceal the stench coming from the location. It is located on a stretch of road with no occupied houses between Kindrum crossroads and the townland of Tullynadall, a distance of around one mile. 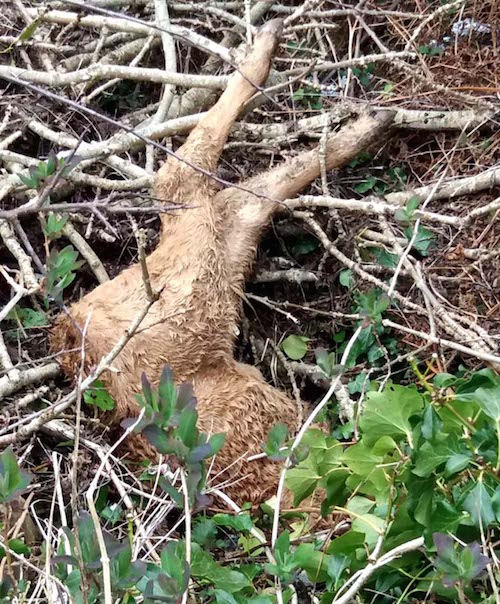 The Council’s litter services were not involved in disposing of these carcasses.

There are unconfirmed reports of livestock losses across parts of Donegal with dumping of dead animals reported being seen along the cliff faces on the Knockalla Road and on the sea coast.

A number of Fanad’s roads are not included in the clean-up day on the basis of safety: fast moving traffic and too many dangerous bends. One lady said she’d looked at some stretches of these routes and was shocked at the level of household dumping.

There were eighty volunteers engaged in the Clean Up Day in Fanad with a number of schools also participating. Close to three tonnes of refuse was collected. However, there is much more evidence in locations that are too difficult to access.

The extent of the refuse dumping is reflected on a half a kilometre of road outside Tamney where one family group collected seven large sacks of refuse including cans half filled with paint, a vast array of wine bottles, coffee cups and the debris from takeaway meals.

On a quiet road near Aughadreena volunteers were shocked with the number of Tennent’s lager cans in one location…over a hundred in all on top of a huge volume of black refuse sacks bursting at the seams with waste materials.

A spokeswoman for the Clean Up Campaign has spoken of their horror and revulsion of finding decaying calves and the dreadful smells. She said it was a traumatic day but nevertheless the community is committed to ensuring that the huge litter problem in the peninsula is cleared annually.

The group has spoken of their horror at finding dead and decaying livestock and have appealed to those responsible to have more respect for the environment and their animals and to use the authorised services available. 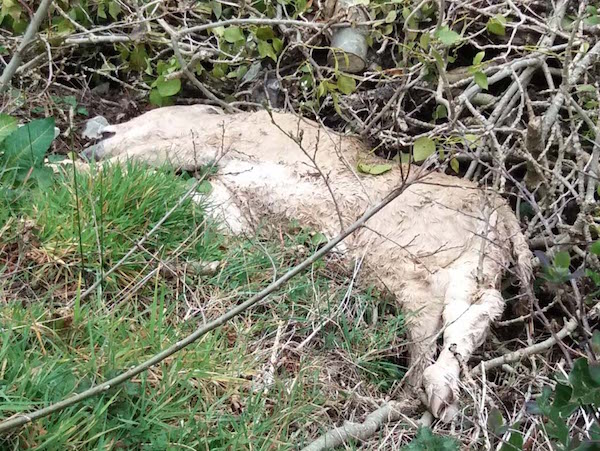 The remains of a dead calf which was also found.

Litter Warden, Martin Roarty who had the task of climbing down the dangerous slope at Tullynadall to inspect the number of dead calves said he was horrified at what he saw and heard from the volunteers who found the carcasses in Fanad.

“What was most worrying,” said Mr.Roarty is that there is ample evidence of bits of skeletons and bones to suggest that this has been a site for dead animals being disposed for a number of years. He said that the problem of litter remains a major one for everyone and detection on country roads where there are many unoccupied houses is causing a huge problem for the litter services.”

An appeal has now gone out from the volunteers engaged in the clean-up for anyone with knowledge of ownership of the dead animals to contact the Gardai urgently.

Martin Roarty says that these problems must be tackled and in most instances there is local knowledge and those dumping cattle are well acquainted with the localities involved.

He said: “Like so many other community volunteers, the Fanad group does massive work in the clean-up of the parish and they had almost 80 people involved. They filled four massive skips and there are remote byroads that are not done because of the time factor involved. Certain people are using quiet back roads to dispose of household rubbish.