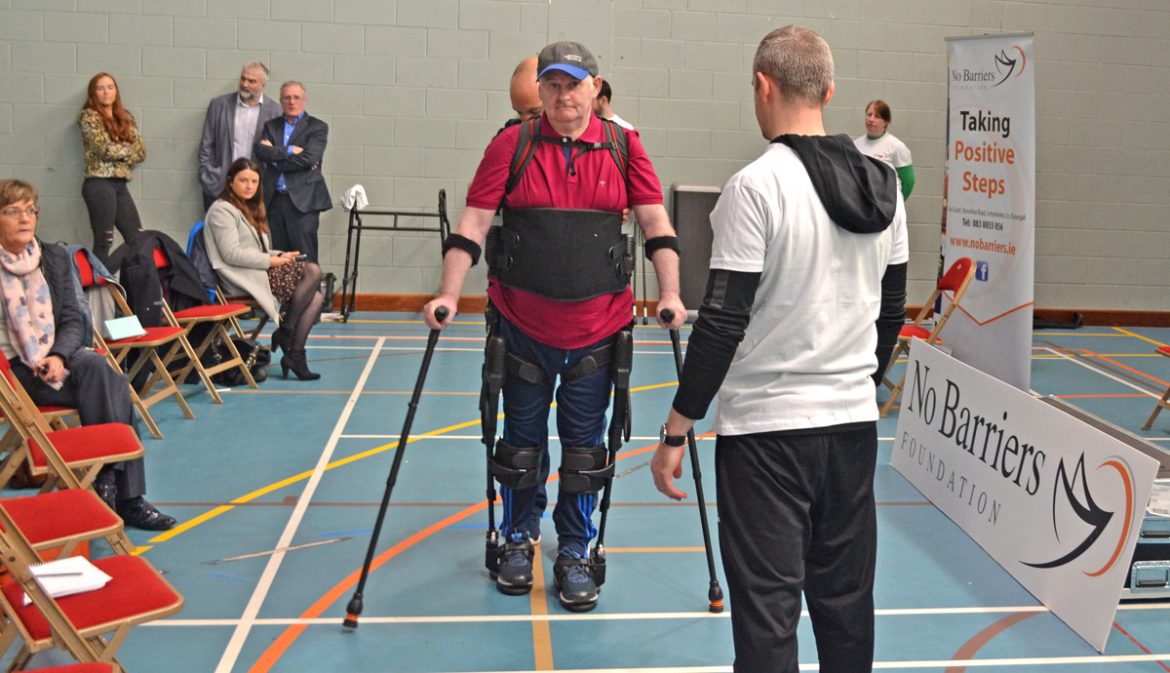 WATCH: There’s no stopping Jimmy Harte on this historic day for No Barriers

Dreams became a reality today as The No Barriers Foundation celebrated the introduction of a new Exoskeleton Robotic Suit to Donegal. Former Senator Jimmy Harte demonstrated this groundbreaking therapy tool, which will be transported to communities across the county in the coming weeks. For the full story, visit: https://www.donegaldaily.com/2018/04/26/watch-theres-no-stopping-jimmy-harte-on-this-historic-day-for-no-barriers/

Dreams became a reality today as The No Barriers Foundation celebrated the introduction of a new Exoskeleton Robotic Suit to the county. An extensive fundraising effort and a much-welcomed DLDC Leader Funding contribution fast-tracked the plan to buy a suit for the benefit of patients in Donegal. The purchase was secured only last week.

The bionic suit is a life-changing technology that enables people with partial paralysis, stroke, spinal injuries and MS to stand up and walk. This upright position is not only fantastic from a physiotherapy point of view but will also help improve the function of various other systems in the body.

Jimmy Harte is one such user who has experienced the profound benefits of the therapy tool, which he displayed on this momentous day at the Aura Leisure Centre Letterkenny. 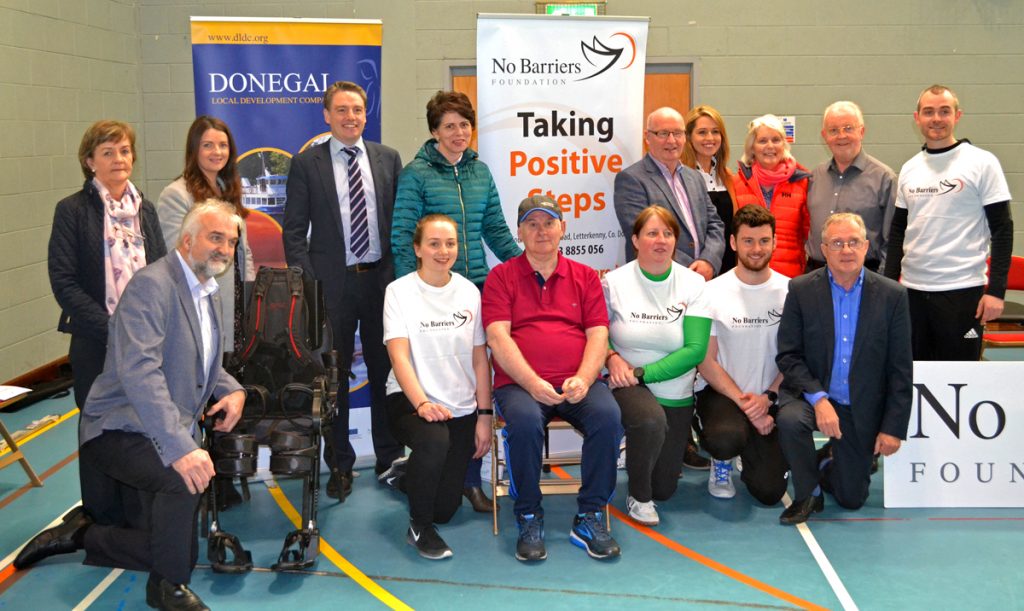 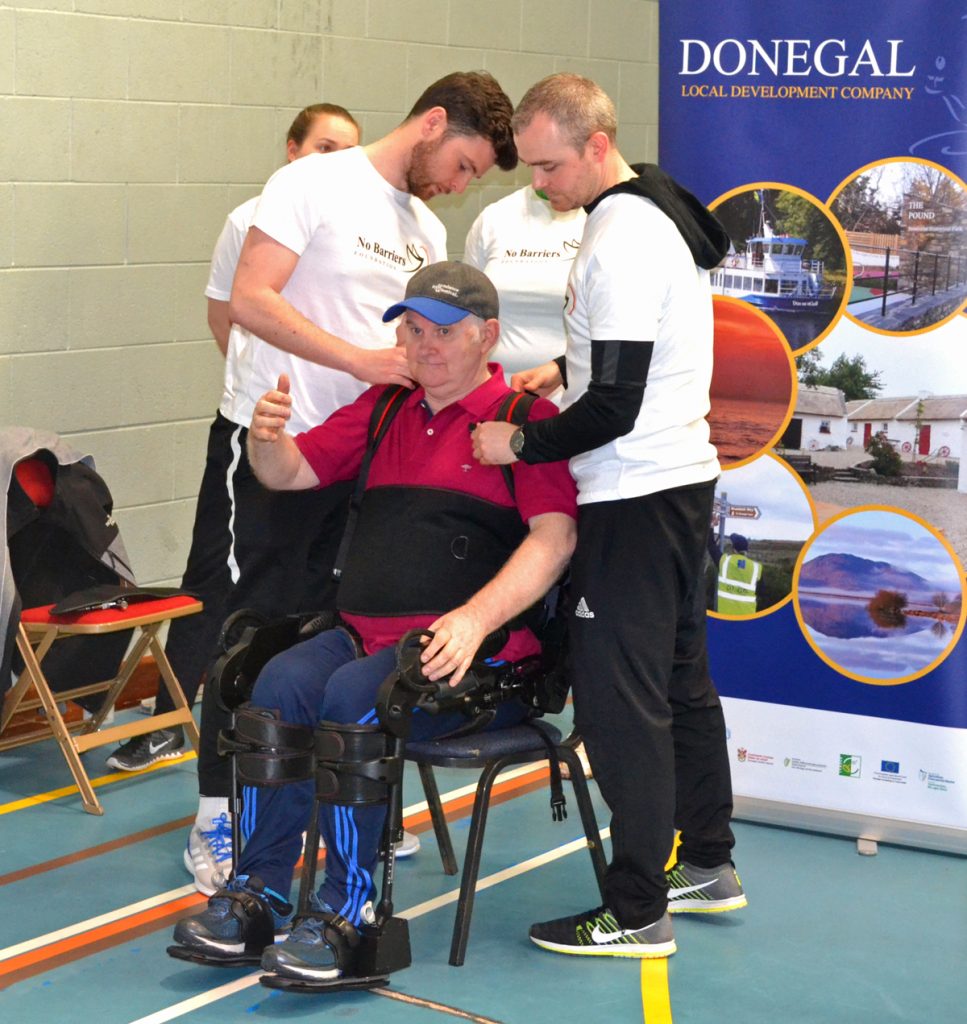 Mr Harte suffered serious head injuries after a fall in Dublin in 2013. He has since made a miraculous recovery and can walk with aids and assistance. The exoskeleton gives Jimmy the freedom to use the muscle activity he has for physiotherapy with support from the suit.

The No Barriers Physiotherapy team and Sebastian Stallasch from Ekso Bionics assisted Jimmy as he ably walked, stepped up and did squat exercises using the suit. It was a special moment for Jimmy, who was smiling from ear to ear as he walked towards his wife Mary. 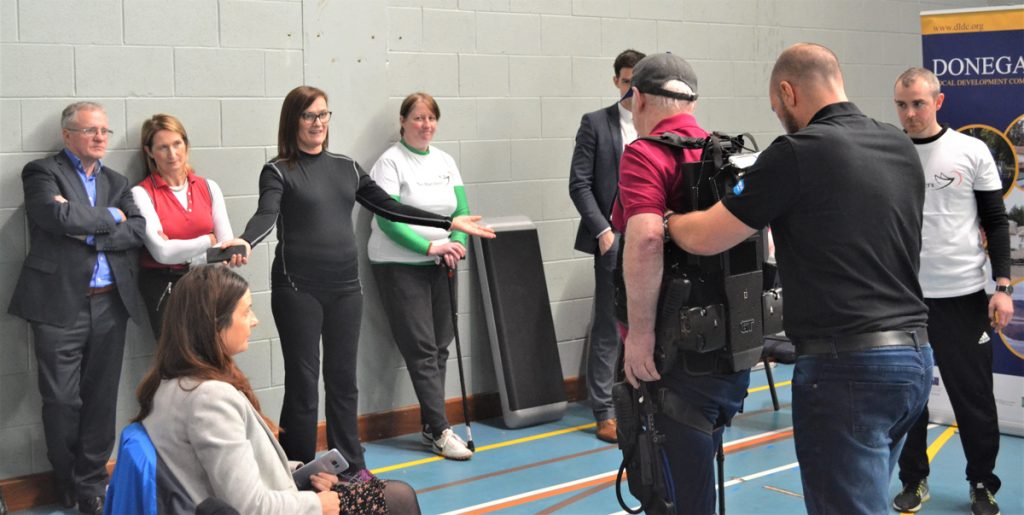 Mr Harte told Donegal Daily how the Exoskeleton will be of immense benefit to the county: “It is great for people with disabilities who want to get back walking normally. The equipment is simple but it is effective and it’s a good boost for Donegal to have this machine here now.”

Today was Jimmy’s third session in the Exoskeleton, and he said he could already feel the impact: “It is great that I can lift my legs and move. I notice after one session that my walking improves,” he said.

Michael Gallagher, Chairperson of the No Barriers Committee, said the mission to buy the Exoskeleton was a dream project that became a reality in a short period of time.

It was announced in January 2018 that LEADER funding of €121,035 was being contributed to the project to supplement the +€40,000 that had been raised from No Barriers charity donations for the purchase.

Mr Gallagher said: “Thanks to LEADER’s support, what was going to be a 3 to 4 year project came together in a year and you can see how this is going to mean so much to the community.”

Mr Gallagher invited patients across Donegal to apply for the project: “We all have loved ones and friends who have been affected in some way by either accidents or illness. Feel free to make contact with No Barriers and the physios will take over from there.”

Joan Barron, Aiveen Lavery, Gearóid McGeehan and Johnny Loughrey are the four physiotherapists who have been specially trained to begin local rehabilitation sessions within the next week. While the project will begin in Letterkenny, there are plans to move it into satellite operations around the county. 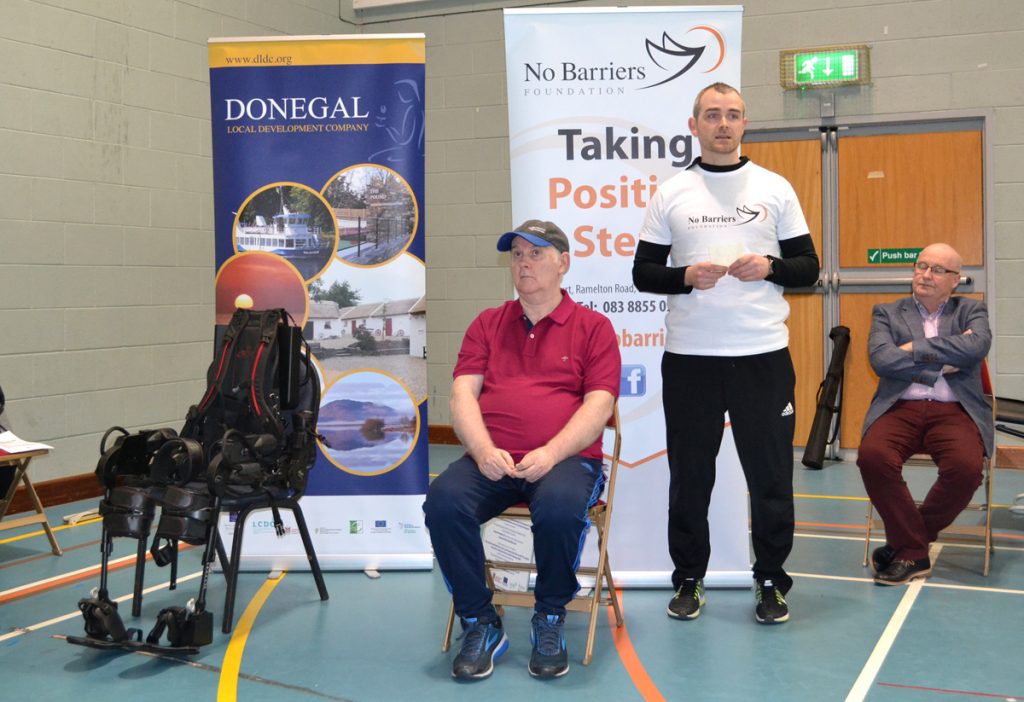 Johnny Loughrey, Director and Lead Physio for The No Barriers Foundation, said the main aim of No Barriers is to bridge the gap between private physiotherapy and public services and make it as cheap as possible for patients in Donegal to get world class physio services.

There are just 300 Exoskeletons in the world and 60 in Europe. Ninety per cent of the robotic suits are being used in hospitals worldwide, while the state-of-the-art Donegal EksoGT third-generation suit will be moved all around the community.

The suit, weighing 27kg, is easily transportable and adjustable to fit all body types and heights. “We aim to operate satellite clinics in different regions of Donegal. The goal is that patients shouldn’t have to travel for more than 30 minute to access the service,” Johnny said. 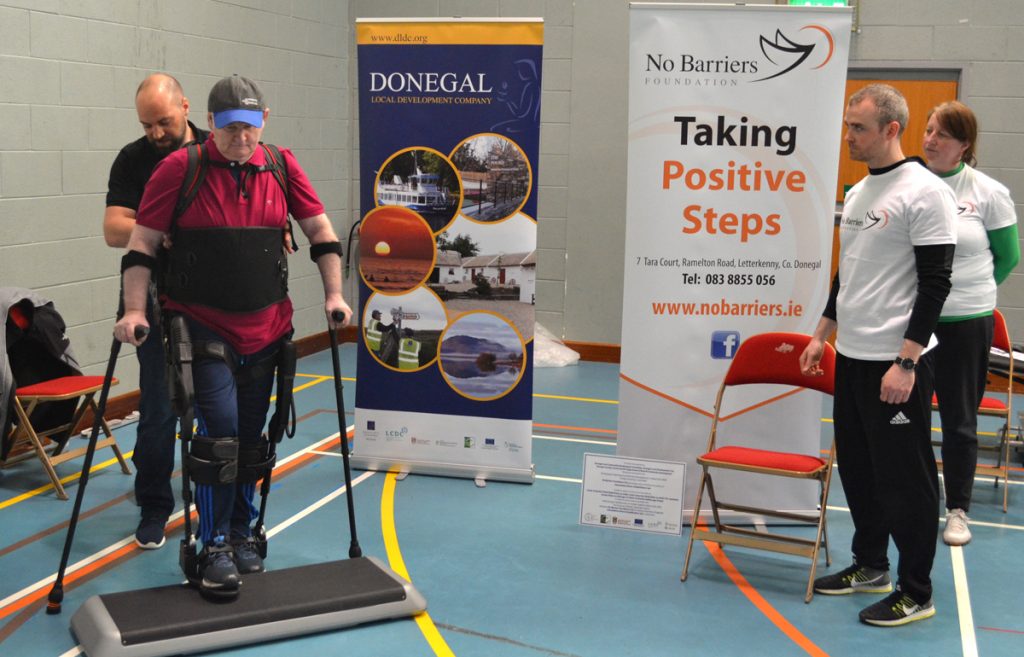 Ekso Bionics Clinical Specialist Therapist Sebastian Stallasch demonstrated the workings of the Exoskeleton as Jimmy Harte walked throughout the room. The interactive device is full of sensors that be driven by the user and can provide the correct assistance each patient needs for a successful therapy.

“Our mission is to bring people back on their feet and make them walk again,” Mr Stallasch said.

Frank Kelly, LEADER Rural Development Manager, commended the No Barriers Committee for their initiative to apply for funding and make this remarkable achievement for the local community.

Please also keep a good eye out for more information on events to support the charity, including the No Barriers Golf Classic on May 26th in Portnoo Golf Links.