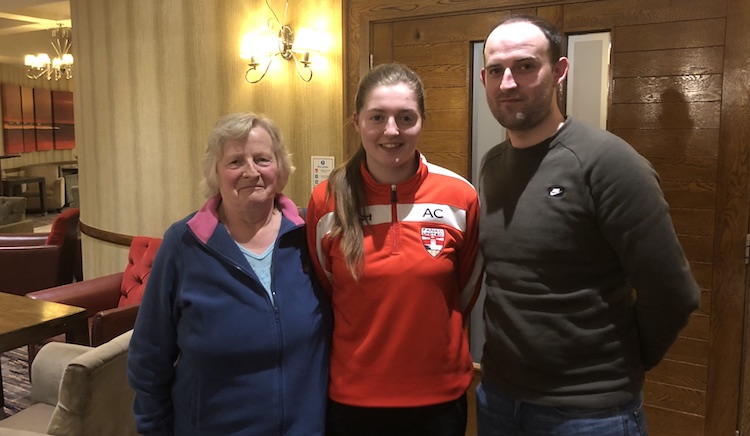 Amanda Callaghan returns to North West Women’s Super League action this week – but back in the colours of Fanad United.

The Rathmullan woman returns to the red and black having been at Lagan Harps for the last few seasons.

“I can’t wait for it,” says Callaghan.

“It’s great for Fanad to be back in the League. I haven’t played for Fanad now for a few years, but I’m back now and enjoying it.

“Growing up, I always played with Fanad and I played with them at senior level before they left the senior league.”

Callaghan was recruited by Lagan during Fanad’s absence and she had good success with the Orchard Park side, who were runners-up to Illies Celtic last year in the Super League.

Callaghn says: “We played at a very high level and we got to a couple of big finals too. We did very well and we were runners-up in the Super League last year and I’m very thankful for what Lagan did for me.

“But It’s good to be back at Fanad now; back to where I was brought up.”

Fanad have also taken in Zoe Green who, like Callaghan, was at Lagan of late and the midfielder expects them to be strong.

Sge says: “We have a good few players signed and there’s a strong team here. We can’t wait to get going. It’s a new experience for us now.

“Hopefully we can get up to the standard.”

Packie McElwaine has taken on the manager’s job of the Traigh-A-Loch outfit.

Callaghan says: “We’re starting from scratch. We have a good set-up and a lot of players coming out for training. We’re all committed.

“Packie is brilliant. He puts in so much effort. He’s doing everything he can for us.”

This year sees the second running of the North West Women’s Super League with last season’s top two – Illies and Lagan – set to clash at Stranaclea on the opening night of the new campaign.

Callaghan says: “The Super League was so much better than what we had. We were playing the same teams all the time and it got a bit stale in the Donegal Women’s League.

“The way this League is set out is very good. It was a good standard and it’s great for all the teams to have a good competition.”