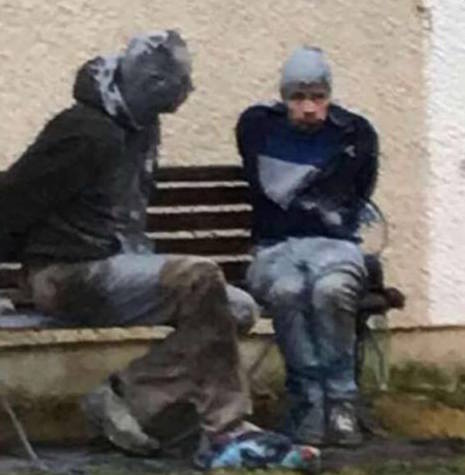 Breaking: Paedophiles who hid out in Donegal have been caught

Two notorious paedophiles who were hiding out in Donegal recently have been arrested in the North.

But tonight the two have been caught by the PSNI in Newry after an incident during which they were set upon in the Mullaghbawn area.

It appears the men may have been attacked before being doused in cement.

An angry mob shouted at the men before they were arrested by detectives from the PSNI.

Sightings of the pair in various towns across Donegal last weekend sparked a social media frenzy.

Pictures of the pair’s blue Peugeot car was posted online and shared extensively.

The pair event tried to buy a new car in Ballybofey on Friday evening but were recognised by the car dealer.

On Saturday morning they were chased from a car park close to the Poundland store in Strabane, Co Tyrone and again fled back to Donegal.

On Saturday evening the duo contacted Gardai and were pictured at Trusk on the outskirts of Ballybofey receiving a Garda escort towards Castlederg in Co Tyrone.

One local man who observed the pair being escorted towards the border said the sex offenders are not welcome locally.

The pair were first spotted in Letterkenny on Friday morning and were loitering close to a circus in the town.

Gardai in Letterkenny confirmed they had registered with them.

Breaking: Paedophiles who hid out in Donegal have been caught was last modified: May 3rd, 2018 by Stephen Maguire
Tags:
caughtdonegalNewrypaedophilesPSNIsex crimes