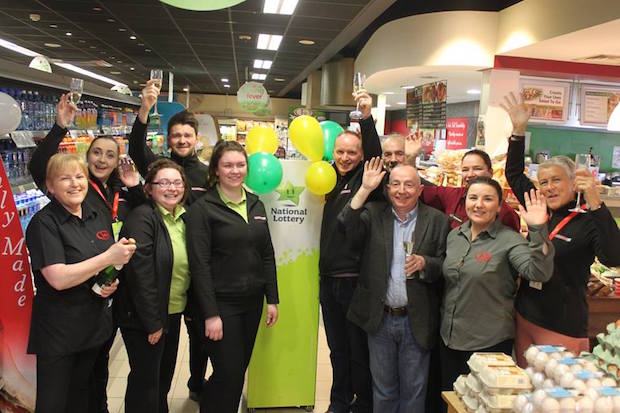 The winner of a bumper €284,964 lotto win at a Co Donegal shop has come forward to claim the prize.

The big winner of the day was a lifetime Lotto player from Donegal who claimed the Lotto Match 5 + Bonus prize in last Saturday’s draw.

The winning ticket was purchased at Kernan’s EuroSpar in Newtowncunningham.

And the local winner spoke of their shock at seeing their Lotto numbers of 30 years being called out on TV last Saturday night.

“We were watching the draw live on Saturday and I almost fell off the chair as I saw my numbers being called out one after another.

“We have been playing the same numbers for 30 years so maybe I was due a big win! The money will be evenly shared among the family but not before we indulge in some celebrations this weekend,” they said.

Play in store, on the National Lottery App or online by 7:45pm on Saturday evening tonight for your chance to win.

In 2017 alone, the National Lottery raised over €225 million for good causes. This level of funding has made a significant difference to communities, projects and individuals in the areas of Youth, Sports, Recreation, Amenities, Health, Welfare, Arts, Culture, National Heritage and the Irish Language.