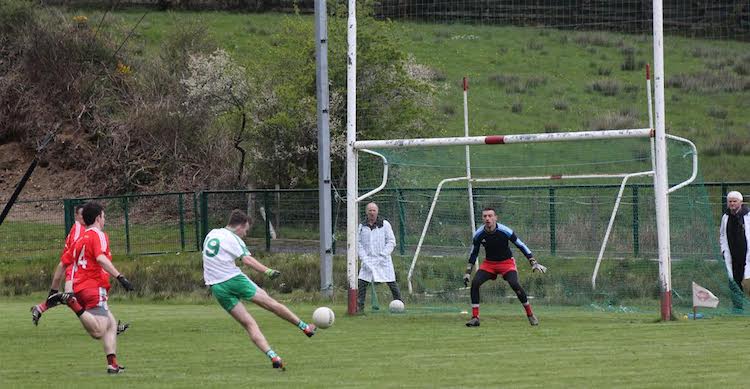 Sean MacCumhaills powered their way to a derby win over neighbours Glenfin at Pairc Tabhoige this afternoon.

By Charlie Collins at Pairc Tabhoige

A handful of late points put a gloss on the scoreline for Glenfin, who were wiped away by the goals in either half by Paddy Hannigan and substitute Aaron Kelly.

Hannogan’s goal late in the first half had MacCumhaills well in front and they were never in any danger of allowing Glenfin erode the deficit.

MacCumhaills – who suffered a first League loss of 2018 last weekend against Four Masters – roared out from the blocks.

By the 10th minute, the Twin Towns men were five points to the good.

Gary Wilson arched them in front after two minutes and from the seventh minute MacCumhaills hit four points in a three-minute spell.

Steven O’Reilly clipped over twice in quick succession before Wilson (free) and Gavin Gallagher added to the tally.

Stephen Carr’s free for Glenfin on 15 minutes only momentarily stemmed the flow.

Conor McBride and Wilson traded frees to leave MacCumhaills ten up at the short whistle (1-9 to 0-2).

A couple of times in the second half, Glenfin kicked a flurry of points, but when Kelly rattled the net for the second MacCumhaills goal, there was daylight between them.

They’d gone close when O’Reilly was denied by a super one-handed save by Andrew Walsh, the Glenfin ‘keeper, but there was no keeping Kelly at bay.

O’Reilly and Lafferty did the spadework and Kelly riffled a fine finish to the top corner.