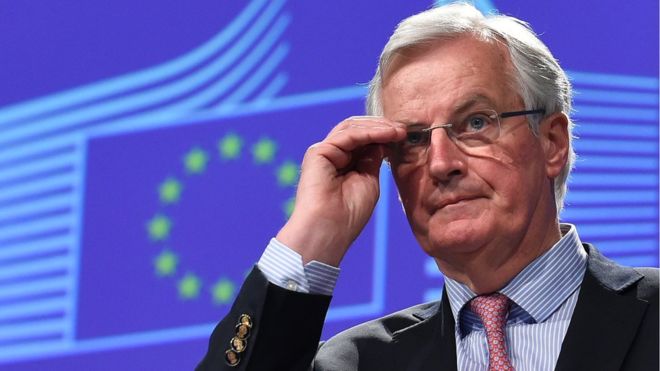 THE EU’s chief Brexit negotiator is due to begin a two-day visit to Ireland today which will include a visit to the Donegal/Derry border.

Michel Barnier will address the Irish government’s all-island civic dialogue in Dundalk before meeting business leaders and lobby groups near the border area.

In a statement the European Commission said: “Mr Barnier has already met unionist and nationalist politicians in both Brussels and Strasbourg, but the particular focus of this trip will be to meet business stakeholders from across Northern Ireland, including cross-border groups and companies in the border areas of Derry-Letterkenny and Newry/Dundalk and rural representatives in Dungannon.”

Last week, unionist MEPs Diane Dodds and Jim Nicholson issued a statement welcoming the visit, but expressed disappointment it was announced by a Sinn Fein MP.

Sinn Fein Foyle MP Elisha McCallion said she was delighted Mr Barnier had accepted her invitation to visit her constituency.

The European Commission added: “Mr Barnier has received many invitations over the past year but this occasion forms part of a series of meetings Mr Barnier has across the EU to engage with stakeholders on the consequences of Brexit.”

Mr Barnier visited the border in County Louth last May 2017.

Last week Brexit Secretary David Davis sparked a wave of criticism for failing to meet locals during a whistlestop visit to south Armagh.

His department also apologised for breaching protocol and not informing the Newry and Armagh MP Mickey Brady.