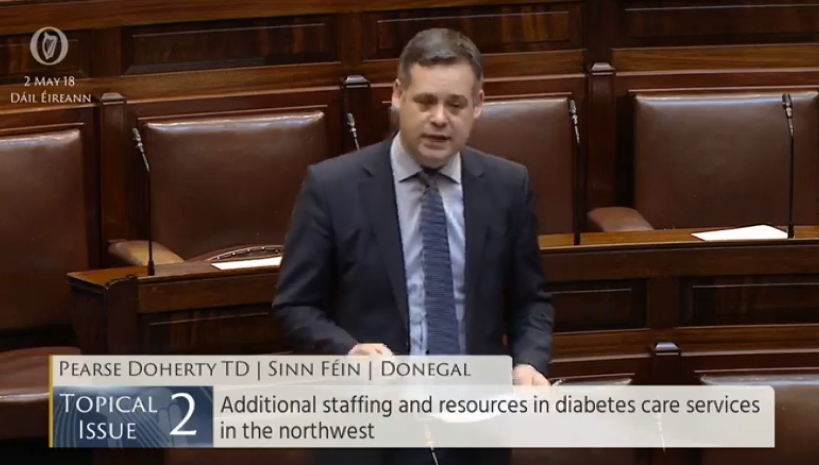 written by Rachel McLaughlin May 2, 2018

Sinn Féin Finance Spokesperson Deputy Pearse Doherty has this afternoon slammed the Government over the ever worsening crisis gripping diabetes care services in the northwest.

Deputy Doherty has described the situation as yet another example of ‘postcode healthcare’ as he called on the Government to urgently intervene to resolve the problem of lengthy waiting times for patient appointments and the ongoing failure to fill a number of clinical vacancies at both Letterkenny and Sligo University Hospitals.

Speaking during the Dáil exchange, which was heard by Minister of State for Mental Health and Older People, Jim Daly, Deputy Doherty said: “One only has to look at the latest data on patient waiting times from the HSE in respect of Letterkenny University Hospital to see the true extent of this emergency situation.

“Because if we look at the figures, adults with Type 1 diabetes continue to wait up to a year for routine appointments and up to 2 years for all recall appointments. This is despite HSE’s own guidelines which recommend that patients with type 1 diabetes be reviewed every 6 months.

“And when you consider that people with diabetes run a significantly greater risk of developing one or more severe health complications due to the condition compared to the general population, then these figures make for harrowing reading.

“Cardiovascular disease, kidney failure, neuropathy, eye damage and even amputations – these are just some of the many complications associated with the condition if symptoms go unchecked.

“And despite many of these being avoidable with the appropriate and timely medical intervention, then it’s reasonable to assume that patients in Donegal, Leitrim and Sligo face a heightened risk of suffering such complications given the unacceptable delays in accessing care.

“Because serious resource and staffing problems are continuing to go unresolved throughout diabetes services here, including paediatric, transitional and adult diabetes care.

“In terms of adult care, a second additional full endocrinologist post remains unfilled, despite it already having been sanctioned by the HSE’s advisory committee.

“Similarly, patients and advocacy groups have expressed disappointment at the fact that a vacant Consultant post at Sligo University Hospital is now unlikely to be filled by a Consultant Paediatric Endocrinologist to compliment diabetes services there.

“At Letterkenny, while long overdue efforts are being made to recruit additional dieticians, there is still no sign of a dedicated post for diabetes care.

“The entire SAOLTA healthcare group remains without a centre of excellence for diabetes – despite commitment after commitment from government.

“Minister, why are patients in the northwest in your eyes less entitled to these services than their counterparts in other parts of the state?

“Let’s call this for what it is – this is postcode healthcare. Where the people of Donegal and the northwest region are made to feel grateful for the little services being offered to them, and that they should be happy with their lot.

“They’re not happy. They’re are standing up and demanding that the Government takes action.

“This is about saving lives and to provide better health outcomes for patients.

“Minister, what action are you now going to take? I am demanding to know how you are going to respond to the fact that people in my own county are waiting up to two years for recall appointments because it is unacceptable that they have to wait that length of time.”

Speaking on behalf of Health Minister Simon Harris, Minister for State Jim Daly TD said the Department, the HSE and Saolta are addressing the matter through recruitment and the provision of extra resources in the northwest.

Deputy Daly said there is a recognition of the challenges in the north west and he made a commitment to increase the pressure on HSE management to ensure it is getting ‘optimal attention’ from the highest levels.