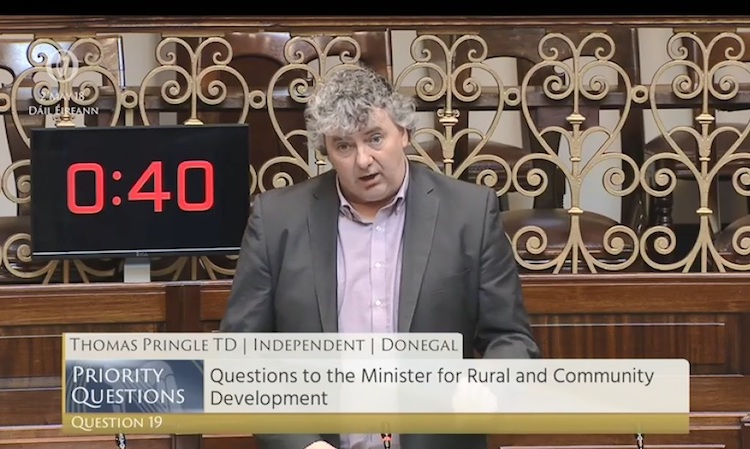 Independent TD Thomas Pringle has today confronted Minister for Rural and Community Affairs Michael Ring in the Dáil over what he believes are anomalies in the distribution of CLÁR funding across all counties and in particular for Donegal.

CLÁR is a funding mechanism granted to local authorities by the Minister for Rural and Community Affairs for projects the Council submits under the following 4 measures: Measures 1 (safety issues around schools), Measure 2 (play areas), Measure 3 (targeted community infrastructure needs) and Measure 4 (first responder supports applied directly to the Department for emergency situations).

All applications are assessed by the Minister’s office.

“After looking over last year’s figures it became apparent that Co. Donegal was granted significantly less funding under CLÁR in 2017 when compared to 2016,” Deputy Pringle said.

“Only three projects received funding in Donegal under the three main measures as part of CLÁR. This is despite the fact that Donegal has 6.4% of DEDS in the whole country and that over 20 projects were submitted to the Department by Donegal County Council.

“Altogether Donegal received 45% less than the pro rata average across the County in 2017 when compared to 2016 figures.

“I begged the question whether this had anything to do with the political climate at the time and decided to confront the Minister in the Dail on this.

“The Minister claimed Donegal County Council projects failed to meet the minimum standards or failed to provide the supported documentations and therefore lost out.

“However, I know of a number of projects which had supported documentation to hand over but this was never requested from the Minister’s office meaning the process was not fairly applied.

“Our exchange in the Dáil got heated when the Minister refuted my claim by providing a list of funding measures given to the county other than CLAR funding, citing the LIS scheme, LEADER, and Town and Village Renewal Scheme however he failed to address the anomaly I brought to his attention.

“The main issue here is that we can see where the funding went and that it did not go to Donegal where needed.

“To prevent this from happening again I asked for him to confirm that a scoring matrix will be used in the processing of applications for 2018 to ensure the allocation of funding under all measures is fair and transparent going forward.”