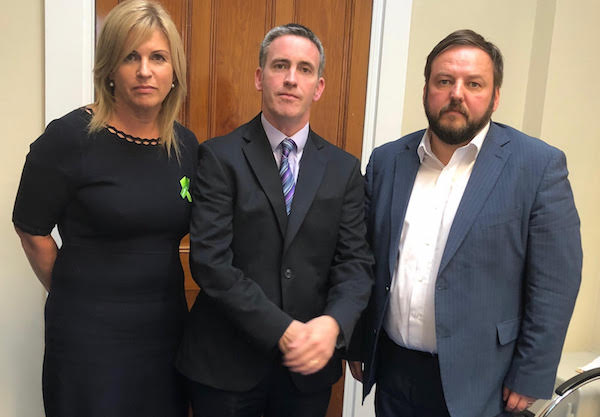 Minister commits to lasting solution for families affected by MICA

Housing Minister Damien English says he is committed to a lasting solution for the families in Donegal that have been affected by Mica defective concrete blocks in their homes.

Senator Mac Lochlainn was speaking after participating in a Sinn Féin delegation led by the party’s Housing Spokesperson, Eoin O’ Broin TD, meeting with Minister English in Leinster House, to push for a Mica Redress Scheme for the affected homeowners in Donegal and Mayo.

Speaking following the meeting, Senator Mac Lochlainn said “I attended the meeting last December in Carndonagh where the Minister outlined to the Mica Action Group, affected families and local public representatives the actions that he had taken since the publication of the Expert Panel Report in June, 2017. We all left that meeting hopeful that the Government would move towards a Mica Redress Scheme and that the affected homeowners would be supported by the State in making their homes safe and sound”

“At this evenings meeting, I conveyed the serious frustration in Donegal with the slow progress in implementing the first two key recommendations from the Expert Panel Report (the establishment of a simple standardised protocol for assessing the damage to homes and recommending remedial actions and need for this to be carried out by a competent registered professional).”

He added that himself and his colleagues reiterated the absolute necessity of a Mica Redress Scheme.

The Minister outlined that he expects to have the draft protocol from the National Standards Authority of Ireland (NSAI) on his desk soon and that he would then seek to fast-track the next public consultation process to a period of weeks rather than months to reflect the delays in the process this year.

Engineers Ireland will then train up a panel of qualified professionals so that they can apply the agreed protocol when assessing the damage to the affected family’s homes and recommending remedial measures.

In tandem, the Minister advised that he is ensuring the progression of legal measures and advice required to move to the stage where family homes in Donegal and Mayo can be made safe.

Senator Mac Lochlainn concluded “I welcome the reassurances from Minister English this evening. But there will no complacency from me and the people of Donegal. We will not accept anything short of a full Redress Scheme”.