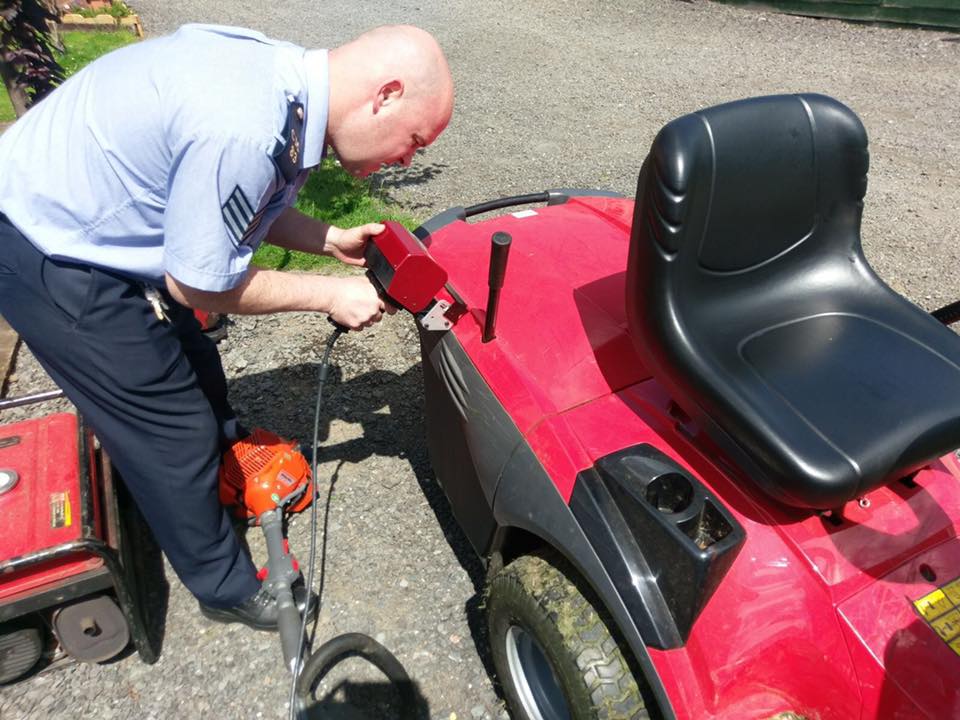 written by Rachel McLaughlin May 2, 2018

Plans are being made to buy a Property Marking Machine for Donegal to combat rural theft of commonly stolen goods such as garden machinery and expensive equipment.

A property marking machine is a device that adds a person’s Eircode to an item to make it easily traceable back to its registered owner.

Eircodes can be added to farm machinery, boats, garden tools such as lawnmowers and chainsaws, or for valuable technology such as iPhones and laptops in schools and colleges.

Sgt Coughlan has led a successful roll-out of the project in Carrickmacross, Co. Monaghan, where reported burglaries have had a significant drop since the scheme was introduced.

Sgt Coughlan demonstrated the machine to committee members on Monday to outline the benefits it has for rural crime prevention.

The machine manually engraves the owner’s unique Eircode into the item or onto a stamp. Sgt Coughlan explained that if Gardai find suspect stolen property, they can run the code through the PULSE system to check if it was reported as stolen, they can pinpoint exactly who it belongs to and then make an arrest on suspicion of handling stolen property – all within minutes.

If purchased, the machine can be loaned out to community groups across Donegal for public use. In Monaghan, Gardai have erected signs warning that property marking is in operation as a deterrent to thieves.

Sgt Coughlan said the machine cost €4,500 to buy and outlined how the project has been cost-neutral in his division through community fundraising and donations.

Cllr Seamus Ó Domhnaill put forward a motion to write to Chief Superintendent Terry McGinn to ask if resources are available to purchase the machine for Donegal. He suggested seeking options for Donegal County Council to buy a second appliance, given the size and population of the county. Cllr Ó Domhnaill also suggested that the DCC Roads Section could be asked to purchase the signage. Chair of the Joint Policing Committee Cllr Gerry McMonagle advocated the motion.