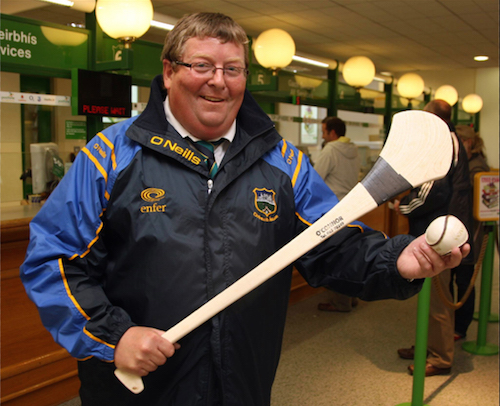 Tomorrow sees the opening of Donegal newest car park in honour of the late county councillor Tadhg Culbert. Here our motoring correspondent Brian McDaid recalls fond memories of a man who brought so much to his adopted town and county.

All going to plan the ever-increasing parking problem in Letterkenny will get a little breather when the council officially opens a new car park on the High Road in Letterkenny tomorrow.

Cllr. Ciaran Brogan when Mayor was the driving force behind pushing for this much-needed parking and didn’t forget one of his late colleagues. 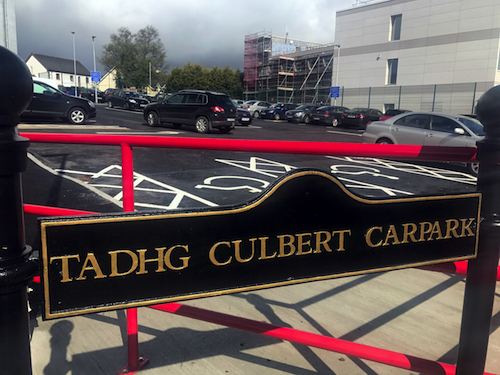 A view of the new Tadhg Culbert Carpark which was on the site of the old Letterkenny Fire Station and will open this week. Photo Brian McDaid

Putting this column together this week a local townie quipped to me, “Sure what did Tadhg know about car parks, sure he didn’t even drive a car.”

You come to learn from living in Letterkenny that this kind of remark is a complement of sorts to Tadhg in that they want you to know that they also knew Tadhg as well as you.

Tadhg was more likely to be on his feet walking down the town having a chat and a yarn to everyone he met rather than sitting behind the wheel of a motorcar. Thing is, I would nearly have agreed with them only to remember my meeting I had with Tadhg shortly before he passed away! 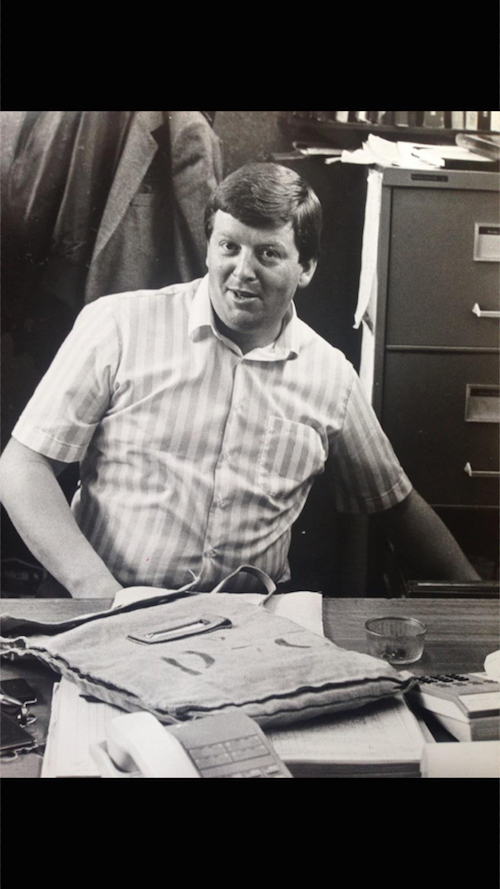 It was on the climb up Meenaroy Mountain one day near to the highest point that a car pulled out and passed me. The driver gave the horn a few toots as he me passed with the sun in both of our eyes. He gave me another few waves out his back window as he headed over the top of the mountain. All I knew was the car was a Toyota which did not look familiar to me, so I thought this driver probably had mistaken me for someone else. It was only a week or so after when I met Tadhg on foot walking down the street that he let me know it was him that passed me that day on the way up the hill. He joked with me, “Always remember that I beat you to the top of Meenaroy.”

On the day we met, both of us knew Tadhg’s time here was getting shorter and rather than chat about that our conversation went down memory lane as we chatted about times in Letterkenny. Working as a newspaper photographer I got to know Tadhg really well from the mid 80’s onwards. Most will remember Tadhg looking out through the glass in the old post office counter, having a yarn with you as he lifted enough ink with his post office stamper to double punch your family allowance, savings or pension book. But I also knew Tadhg as the public representative, both as councillor, chairman and Mayor of Letterkenny Urban District Council. On our journey down memory lane we recalled the lighter moments when Tadhg, as the director of the Letterkenny International Folk Festival on the night when it poured down from the heavens with thunder and lightening battering of the roofs at the Market Square but Tadhg pushed on in the storm and between the lighting strikes he opened the town’s festival. 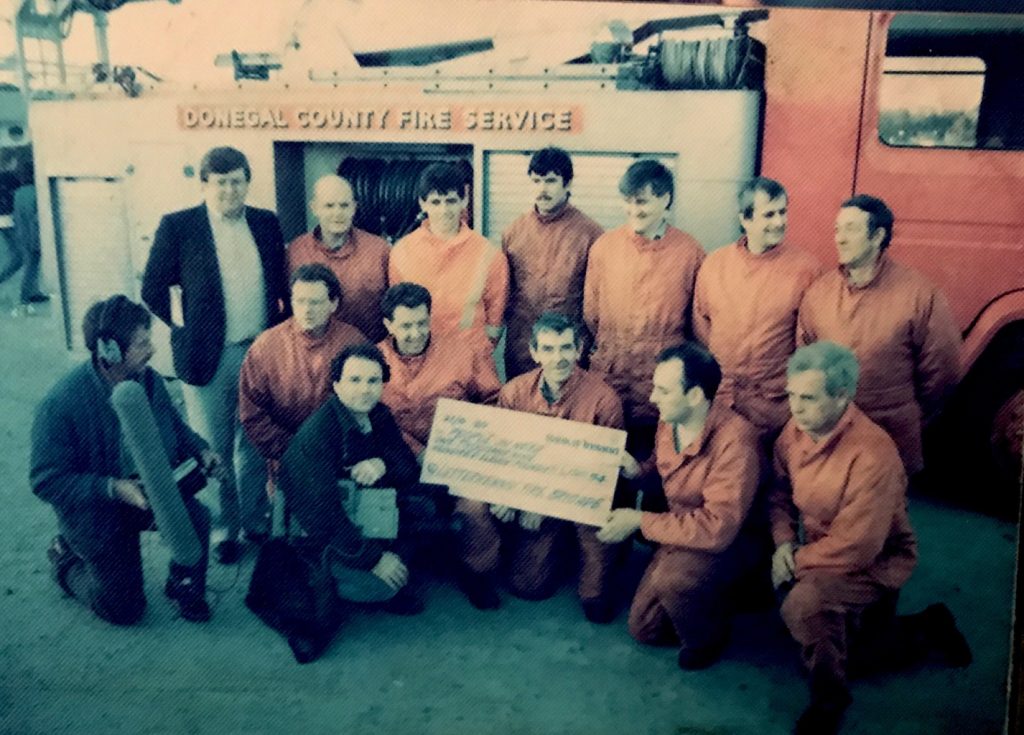 For the week that is in it, the greatest memory of Tadgh will centre around the first ever Telethon which was done nationally in conjunction with RTE.
Tadhg Culbert’s Car park will officially open in the site of the old fire station which was located there since the early 1960s. In 1989 the Letterkenny Fire Brigade came up with the novel idea of pulling their biggest fire engine, which weighed over 17 tonnes across the Old Railway Road to raise money for the Telethon and People In Need. They even had their own name for their fundraiser which the called “The Pullathon”. 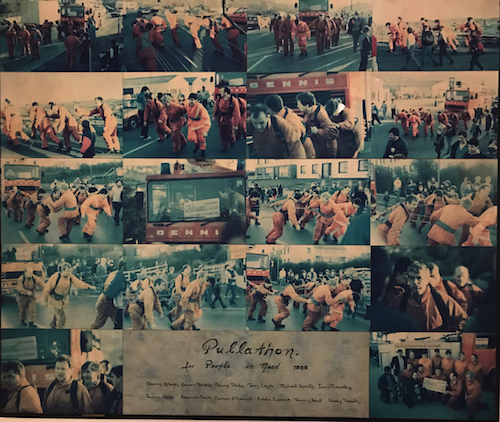 Pictures by Paddy Coyle of the Pullathon by the Letterkenny Fire Brigade in Letterkenny back in 1989 which Tadhg Culbert played a big part in.

On the run-up to the Pullathon in Letterkenny in the days long before social media, Tadhg Culbert offered to help in any way he could to promote the upcoming event. He even agreed to go around Letterkenny on the back of an old Bedford Fire Engine armed with a loudspeaker and an old tape recorder from RTE’s 2FM with DJ Larry Gogan talking about the fireman’s Letterkenny’s Pullathon.
Tadhg went on a speaker asking the Letterkenny people to come out to support the fundraising efforts by their local firefighters. Tadhg might as well have been on the ropes pulling the fire engine with the fireman because of the great job he did in pulling in support for a night that turned out to be an amazing success.
On the night the fireman started their pull from the Oldtown station gatehouse and headed across the Railway Road which originally was the track of the old Lough Swilly Railway line out of Letterkenny to Burtonport.
Things were going great until they got are far as JJ Reid’s garage and they found that the road had a rise heading towards the station. The firefighters were fast running out of steam and to make thinks worse RTE had started to film them. They did manage to get the 17-tonne fire engine to the end of the railway road with a lot of huffing and puffing much to the cheers of the supporting crowds on the night.
The late Michael Walsh and cameraman Tony Cournane, now retired from RTE, received the fireman’s fundraising cheque in a team photo which included all the members of the Letterkenny Fire Brigade and Tadhg Culbert who for all of his life was always on hand to help with anything that could be positive for his adopted town of Letterkenny. 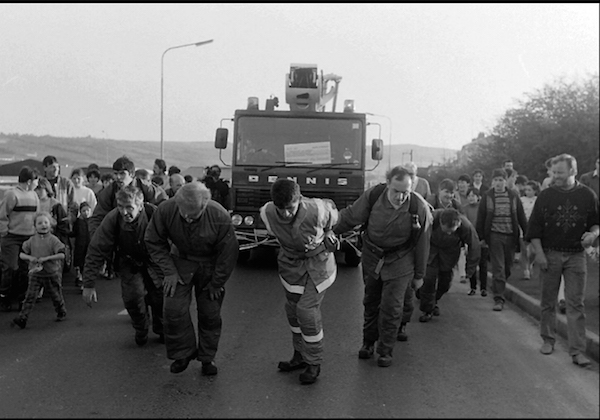 There would be so many health and safety issues nowadays that would prevent a crew of fireman anchoring themselves to the front bumper of a fire engine and pulling 17 tonnes across a mile of what once was the old railway road.

And even health and safety would prevent a non-member of the fire service such as Tadhg travelling in a fire engine let alone calling out with a loudspeaker. But those things happened years ago long before the claim culture took over.

Tadhg Culbert believed in people which in turn made them believe in themselves. While others were trying to see what you were doing wrong, great people like Tadhg were getting the job done. The Pullathon by Letterkenny Fire Brigade in 1989 included the late Eamon Harvey, the late Eddie Curran, the late Sam Eamon O’ Donnell and the late Benny Daly, pictured with Danny Grieve, Brian McDaid, Ronnie White, Louis Bradley Michal Herrity Tony Coyle. and Tommy Friel at the wheel

And finally a different park

Tadhg would never forgive me if I didn’t mention Tipperary and hurling. One of my favourite photos is of Tadhg the year his beloved Tipperary won the all Ireland hurling final in a park of a different kind. That day we done a picture in the middle of Letterkenny Post office with a hurley stick and a sliothar which we got a loan of from Brian McCormack’s sport shop across the main street. 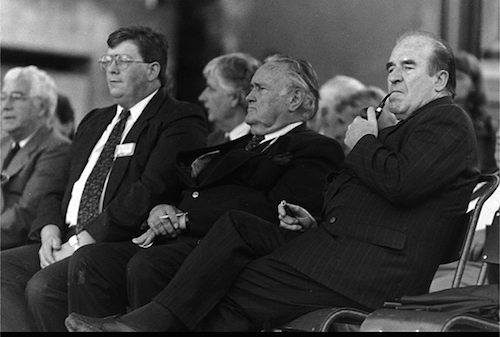