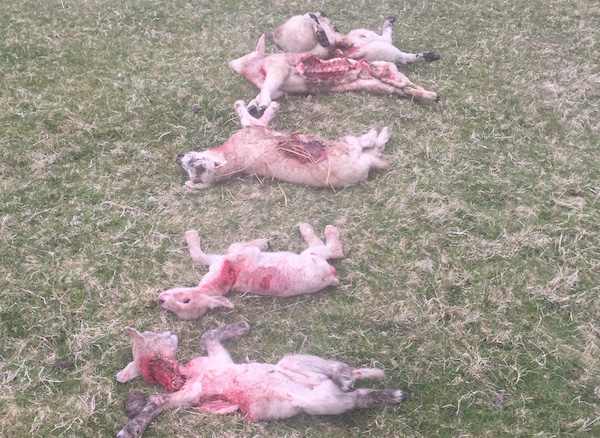 The shocking and savage attack by marauding dogs on a flock of sheep on Monday night has shocked the farming community in the Downings area.

In what was the fourth similar attack in recent years, five lambs were torn apart, one remains missing and four others have serious injuries from which they are unlikely to recover.

The remainder of the flock has been severely traumatised huddled together in a corner of a field, unable to eat and in fear of their lives.

The latest attack took place on the farm of Charlie McGeever in the townland of Derryhassin in Rossguill and Gardai and the County Council’s dog warden are thought to be following a particular line of enquiry.

Gardai were carrying out investigations in the locality on Tuesday and Wednesday and it was reported that substantial progress has been made and the situation continues to be monitored.

Mr. McGeever made the grim discovery after 9.00am. on Monday. It was the second attack on his flock in two years when he found three lambs dead… and a dog he recognised nearby.

He said the owner agreed to pay compensation and guaranteed the activities of the animal would be fully monitored thereafter.

A shocked Mr. McGeever told the Tirconail Tribune that the entire flock had been damaged, likely beyond survival.

He said there was a big cost involved but his real concern was about the suffering inflicted on innocent lambs as they were torn apart and the trauma it has inflicted on the ewes and in the community.

The farming community believes that the same dog may have been involved in all of the attacks amid local calls that the animal must be euthanised as a matter of priority.

Once again the Gardai and all farm organisitions have appealed to all dog owners to behave responsibly and to ensure their pets are fully under control at all times.

Sheep flocks with lambs are at their most vulnerable at this time of year and the public is advised to be fully aware of their responsibility when bringing their pets into farming locations.